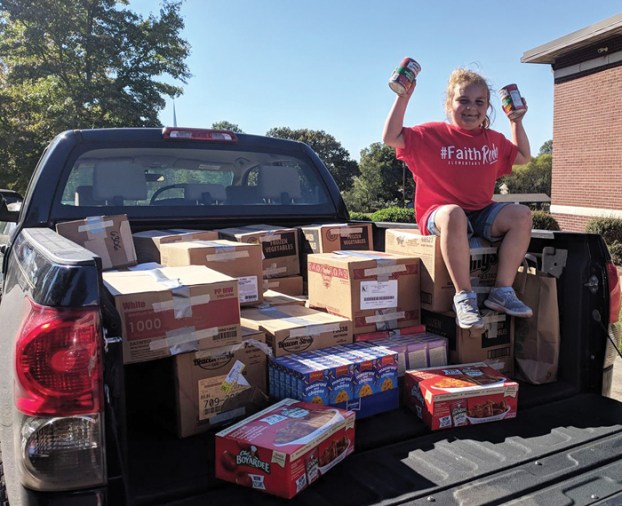 Rose Vickers, a kindergartener at Faith Elementary, asked if she could collect cans of food instead of receiving birthday presents. When word got around at Faith Elementary, students collected roughly 1,000 cans to donate to local organizations and schools in need. Submitted photo

FAITH — Classmates at Faith Elementary School describe Rose Vickers as “sweet,” “kind” and empathetic. But until a few weeks ago, the kindergartner kept a low profile.

Now, most of the student body knows who she is.

Just on the cusp of 6 years old, Rose decided to forgo presents or a birthday party this year. Instead, she asked people to donate canned goods.

“Because people don’t have food,” she said.

Rose was inspired by a sermon at her church and a conversation with her mother about those affected by recent hurricanes. And the wheels in her head turned and turned.

“I came up with the idea while I was in bed,” Rose said.

When she told her mother she wanted to hold a canned food drive for her birthday instead of getting presents, her mother contacted the school.

Rose is shy and just a few months into her first year of school, so other students stepped in to help. Faith Elementary’s budding 4-H club — in its first year — took on the bulk of the project.

Club President Wendy Thompson, a fifth-grader, said club members made posters to put around the school and went knocking door-to-door at classrooms to pick up donations.

Rose said she never doubted the school would collect a lot of cans.

Most people, Wendy said, would have heard that there are people in need and shrugged it off.

“Ninety percent of the world is like that. Then there’s the 10 percent. … There’s a kindergartner who understood through a church sermon that people need help,” Thompson said.

The group and other students were encouraged by teacher Crystal Wagoner, who knows Rose and her family personally. When it comes to a giving nature, Rose “gets it honestly.”

Student and 4-H Vice President Erin Augustson said she was inspired by a talk Wagoner gave to students about the food drive.

“She gave this big speech, ‘I know this person by heart; she’s really special,’” she said.

When 4-H students agreed to help collect cans for Rose, they hadn’t met her. But that didn’t stop them from spending two weeks carrying boxes and bags full of cans and other goods to be stacked in a school office.

“The last day you couldn’t see the wall,” Wendy remembered.

“It looked like a cardboard castle — but with cans,” Erin added.

All in all, students at Faith Elementary collected about 1,000 cans over a two-week period. On Friday, Rose and her family picked up the goods and delivered them to Rowan Helping Ministries and to nearby schools with higher levels of need. While no incentive was given to students, they’ve found the experience rewarding nonetheless.

“I felt good because I knew I was helping someone,” Gryffin Bowman said.

“I feel really good about being able to give people a lot of food after all the disasters,” Wendy said.

And the group is impressed that the idea came from someone so young.

“Out of kindergarten through fifth grades, a kindergartner decided to do that,” Erin said.

As for Rose? She said she is happy with the success of the drive — and is looking forward to turning 6 on Thursday.