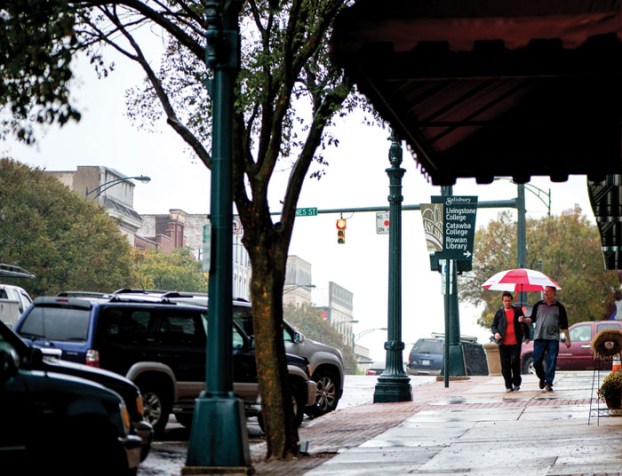 Some much needed rain descended on Rowan County and Salisbury on Monday. Steve and Dawn Watkins share an umbrella as they walk downtown Salisbury on monday. Jon C. Lakey/Salisbury Post

Some much needed rain fell across Rowan County as thunderstorms passed through. Some areas in the region came under tornado watches or warnings.

Most of the outages were in Catawba County, where more than 30,000 customers were without electricity as of 7 p.m. Monday. In Wilkes County, 20,000 customers had no power.

The N.C. Department of Transportation said heavy rain caused a small mudslide on U.S. 64 near its intersection with U.S. 74A in Henderson County, leading to the closure of the highway.

A detour was set up until the road is cleared and deemed safe. DOT workers trimmed two trees to take weight off the roots, and a team was to monitor the scene overnight before additional assessments are made after sunrise today.

A tornado watch was posted for the central Piedmont, including Rowan, Cabarrus, Davidson, Davie, Iredell and Stanly counties, until 9 p.m. Monday.

The forecast calls for the sun returns today, with a high of 70 and light west wind. It will be a partly cloudy tonight, with a low of 41.

Temperatures are expected drop at least 10 degrees for Wednesday, with a high around 60 under sunny skies.