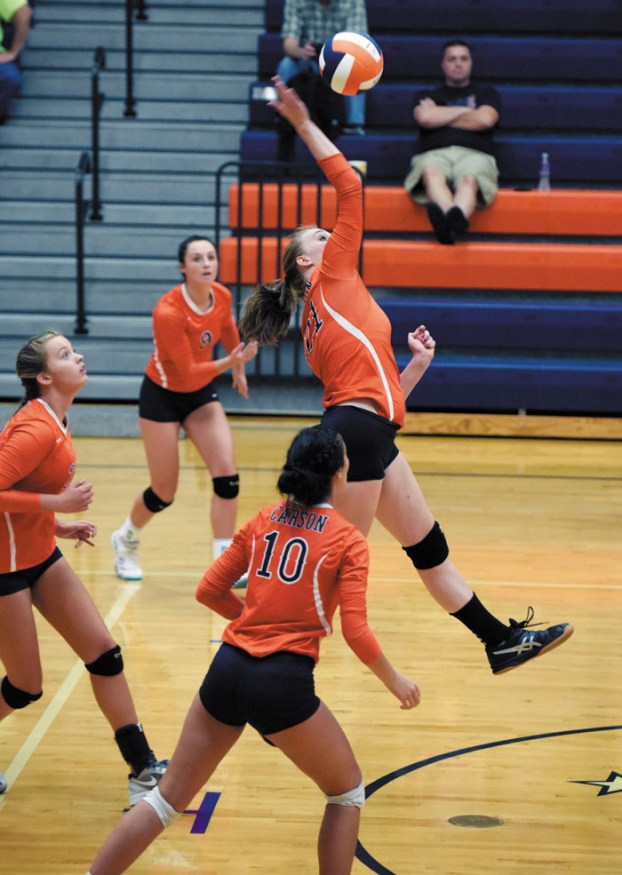 Wayne Hinshaw file photo/for the Salisbury Post ... Carson’s Sophie Andrews (21) on attack in an earlier game this season. Teammates Grace Thomas (10), Mallory Weast (9) and Jaden Vaughn, left, look on. Carson defeated North Buncombe in three straight games on Tuesday, in the second round of the state 3A playoffs.

Carson volleyball advances in 3A playoffs Wayne Hinshaw /for the Salisbury Post
Carson libero Kary Hales passes the ball as Grace Thomas (10) looks on. Carson defeated North Buncombe in the 3A playoffs on Tuesday.

CHINA GROVE  — As second-round 3A state playoff matches go, this was a breezy one for Carson.

The 26th-seeded Blackhawks (12-13) had upset No. 7 seed Crest in the first round. That gave 10th-seeded Carson an unexpected home game on Tuesday.

“Sometimes we play that first set and see how hard we think we need to play to win,” Carson coach Kelan Rogers said, shaking his head. “But I didn’t think we played very well at all. Not hard enough. Not enough focus. Way too many errors.”

The Cougars (23-4) know they’ll have to pick it up to have a chance against second-seeded Marvin Ridge (25-1) in Waxhaw in Thursday’s third round.

Carson never seemed in danger of losing to North Buncombe, no matter what the scoreboard said. Even when sets were still tight, Rogers, looking for a spark, shuffled players in and out like it was a preseason scrimmage. Some Cougars who usually play little, played a lot. Some Cougars who never sit, sat. Some Cougars who have been on the jayvee team contributed.

Carson got down 3-0 in a sluggish first set, but gradually took control. Middle hitter Lindsay Elmore took over the net when the Cougars were clinging to a 13-11 lead. She had a kill, followed by solo two blocks for a four-point lead. Mallory Weast pushed it to 17-11 with a kill.

Carson closed that set with positive plays, a combo block by Sophie Andrews and Jaden Vaughn for 24-14, followed by an ace for set point by Weast, the first ace of the night for the Cougars.

“When you get a block, you can just feel it,” said Andrews, a senior middle blocker who had five kills and three blocks. “Everybody’s energy goes up.”

Carson was sloppy early in the second set and had stumbled behind, 9-7, when Rogers called a timeout. The Cougars responded over the next few minutes and quickly got back to 9-all on kills by Weast and Vaughn.

The go-ahead point for the Cougars was one of the best of the night. Freshman libero Kary Hales made three straight digs before Weast put Carson on top, 10-9, with a kill.

“I know where to go on the court, and a lot of those digs came from my teammates talking to me,” said Hales, who surpassed 600 digs for the season. “When you have great communication, you don’t have to cover that much ground.”

Carson’s lead was still only 17-14 when Andrews and setter Grace Thomas combined for a block that took the remaining starch out of North Buncombe. Thomas delivered the ball to Vaughn for set point.

In the final set, North Buncombe hitting errors, missed serves and violations handed Carson a 9-3 lead before the Blackhawks used a timeout to regroup.

North Buncombe played its best all night after that timeout and crept back as close as 18-15 on an ace by Meghan Cooley and kills by Caitlin Griffin and Makenna Clark.

The crowd was getting antsy. Rogers didn’t look all that concerned.

Carson stopped the NB run when Elmore defeated a block attempt. Then sophomore Leah Cauble entered the game for Carson and produced three aces in a hurry, plus one of the toughest digs of the night, to secure the sweep.

“Not our strongest match,” Hales said. “But whenever we needed to come together, we did.”

Carson came together enough to put North Buncombe on the road back to Weaverville, 141 miles from China Grove.

And now the Cougars hit the road to Marvin Ridge.

“I know we’ll play with energy,” Andrews said. “The bond on this team is very strong.”

Salisbury tennis breezes in second round of playoffs

By David Shaw sports@salisburypost.com SALISBURY —Longevity is a tough test, but so far the Salisbury girls tennis team is earning... read more