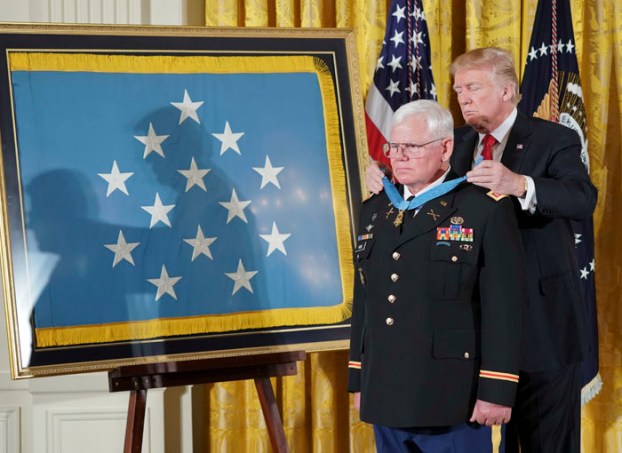 WASHINGTON — President Donald Trump on Monday turned a Medal of Honor ceremony for a Vietnam-era Army medic who risked his life to help wounded comrades into a mini homework tutorial for the boy and girl who came to watch their grandfather be enshrined “into the history of our nation.”

Every Wednesday, retired Army Capt. Gary M. Rose’s grandchildren — Kaitlyn and Christian — head to his Huntsville, Alabama, home for “homework night” with him and Margaret, their grandmother, Trump said. “I think that Kaitlyn and Christian will agree this fieldtrip is their best homework assignment yet. Right?”

Trump said he had been told that Christian recently asked Rose about the Medal of Honor. Then he proceeded to explain.

“It’s the award given to America’s bravest heroes who earn our freedom with their sacrifice,” said Trump.

“Those who receive the Medal of Honor went above and beyond the call of duty to protect their fellow service members and defend our nation,” he said.
He said Rose is a “patriot who never gives up, never gives in, and always stands strong for God, for family, and for country.”

With that, a military aide read a citation recounting the acts of heroism the now 70-year-old Rose performed on Sept. 11. 1970, as the only medic for 136 men who embarked on a mission designed to keep the North Vietnamese from funneling weapons along the Ho Chi Minh trail to use against American troops.

Throughout the four-day mission in Laos, Trump said, “Mike rescued those in distress without any thought for his own safety,” including in one instance by using his body to shield a wounded soldier from the rat-tat-tat of machine gunfire while treating the man and then carrying him to safety.

A helicopter sent to extract the men was downed by enemy fire. At that point in the retelling of Rose’s story as a member of the 5th Special Forces Group, Trump paused to say, “Mike, this is serious stuff. This was not a good four days.”

Before the chopper crashed, Rose rushed to the aid of a Marine gunner who was shot in the throat. Rose was thrown from the helicopter before it hit ground, but raced to the crash site less than a mile from where it had taken off and pulled one man after another from the smoldering wreckage, Trump said.

Another helicopter rescued them. Rose, covered in blood by the time he reached the base, refused treatment until all of his men had received care.

“In every action during those four days, Mike valiantly fought for the life of his comrades, even if it meant the end of his own life,” Trump said.

Rose, who was raised in Watertown, New York, became the second person to receive the Medal of Honor from Trump.

He said after the ceremony that the medal belonged to all of his comrades, not just to him alone.

“This is our medal, not mine,” he said, speaking to reporters outside the White House.

The president seemed to marvel at how Rose now lives his life following two decades in the Army and a post-military career as an industrial designer.

Rose volunteers with groups like the American Legion as well as a local soup kitchen, fixes broken appliances for his elderly and disabled neighbors, donates his hair for people with cancer, makes lunches for children who don’t have enough to eat and organizes community gatherings “to bring people together, which is something we need all over the world and certainly in our country,” Trump said.

While the topics of Saturday’s Intergenerational Financial and Lifestyle Empowerment Conference may have seemed daunting, presenting organizations kept the mood... read more