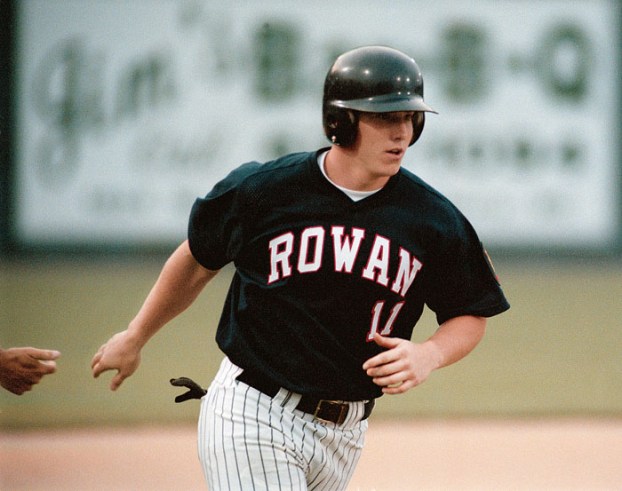 GRANITE QUARRY — Two decades have flown by, almost as rapidly as Eddie Guessford once launched fastballs out of Granite Quarry’s Staton Field and Salisbury’s Newman Park.

Guessford, the late-1990s slugger who boasted the biceps of a blacksmith as a teenager, is now a 36-year-old teacher and coach at Erwin Middle School.

He’s also a young Hall of Famer. For his contributions to the school’s baseball program, Averett University inducted Guessford into its Sports Hall of Fame in ceremonies held on Saturday.

Guessford became a household name for Rowan County sports fans in the fall of 1997. He was a brawny football linebacker, the second ferocious LB on a squad that also included his Shrine Bowl bash brother, Adam Horton. East had one of the strongest seasons in school history that fall — 10-3. One of those 10 wins was an epic brawl at A.L. Brown’s Memorial Stadium. That was the Wonders’ lone loss in a 15-1 season that climaxed with a state-title celebration.

Guessford made a huge fumble recovery in the Standing Room Only game at Kannapolis. His coaches pleaded for the Mustangs, who had just scored, to get the ball back. Guessford went into a pile after Horton caused a fumble on the kickoff, wrestled the ball away, hauled it to the sideline, and personally handed it over to coaches Jeff Safrit and Darrell Misenheimer.

“Hey, we got the ball back,” Guessford told them.

Guessford meandered through the 1996 baseball season on East’s jayvees and spent the 1997 season buried on the varsity bench. Nervousness was holding him back.

But the football success of 1997 elevated his confidence. In the spring of 1998, he had his mojo working and he started destroying baseballs as well as ballcarriers. As a junior juggernaut, he rose from nowhere to Mark Norris Memorial Award winner as Rowan County Player of the Year.

Guessford launched a homer in his first at-bat that season. He capped the season with a dramatic blast in the 3A state playoffs.

He provided one of the best clutch swings in East history. East began the 1998 season 1-2 and was on the verge of sinking to 1-3 against Piedmont fireballer Scott Manshack, who was headed to UNC. But Guessford’s homer turned around that game — and the season. East finished 14-2 in the South Piedmont Conference. The Mustangs went 24-4 overall.

“That was miraculous,” said Safrit, who also coached Guessford in baseball. “We won game after pressure-packed game against everyone’s ace.”

Safrit said after that epic season, “I’ve had a lot of great players. I’ve never had one who hit balls as far as the ones Guessford hit. Eleven of those 12 homers were important ones that helped us win a game. They weren’t coming when we were ahead by 10 runs.”

Between his junior and senior years at East, Guessford, who already had overcome multiple knee injuries, suffered a devastating setback playing American Legion ball. He broke a leg on a slide into third base at Mooresville.

“I was out 66 days and spent that whole time rehabbing, basically living at the ortho clinic,” Guessford said. “But I didn’t miss a football practice or a game my senior year.”

As a senior on the baseball field for the Mustangs in the spring of 1999, Guessford was limited to human numbers — five homers and 28 RBIs — but he batted .456 in a dog-eat-dog league.

In the summer of 1999, Guessford finished up his Rowan County American Legion career. He belted 20 homers in two seasons —and one of those was a partial season. His career batting average was .384.

Guessford (6-0, 210)  signed with Wingate as an outfielder, although it didn’t work out for him with the Bulldogs.

There was a year at Surry Community College before Guessford landed at Division III Averett in 2003. Few people in Rowan County had heard of Averett then, but the small school in Danville, Va., has provided an education for dozens of Rowan athletes over the years. Former South Rowan volleyball player Nicole Barringer, now a Catawba assistant coach, is a good bet to be another Averett Hall of Famer down the road.

In 2003, he batted .462, with 16 doubles, six homers and 53 RBIs in 41 games. He was first team all-conference, first team All-State and second team All-America. Averett won the USA South Tournament and qualified for an NCAA regional for the first time.

In 2004, Guessford batted .368 with nine homers, 15 doubles and 11 steals. He walked more often than he struck out and repeated as first team all-conference.

Guessford wasn’t drafted by MLB, but he took his shot at pro ball in the independent leagues, competing in California for the Chico Outlaws in 2005  and in Missouri for the River City Rascals in 2006. He held his own, batting .266 and .273, totaling 26 doubles and 45 RBIs. But he had turned 25, and he had no regrets. He’d reached his limit as a player and knew it was time to move on with his working life.

Guessford had special teachers along the way and knew he wanted to teach and coach. Sports was what he loved. Teaching sports would be ideal. That’s the career path he took.

Guessford found a home at Erwin Middle School, across the street from the football field where he once dented helmets for the Mustangs, and just a few miles east of Staton Field, where his towering homers over the left-field fence once woke up the dozing dogs and sent them into barking frenzies.

The swagger of muscular youth is gone from Guessford now, slowly removed by life’s hard lessons, replaced by humility and gratitude. He’s proud of what he’s done but prouder that he has a chance, every day, to make a difference in the lives of his students.

His message is that education must come first, but he also encourages youngsters to follow their athletic dreams.

“I want them all to be champions,” Guessford said.

Playoff spot for a Group 5 team this year?