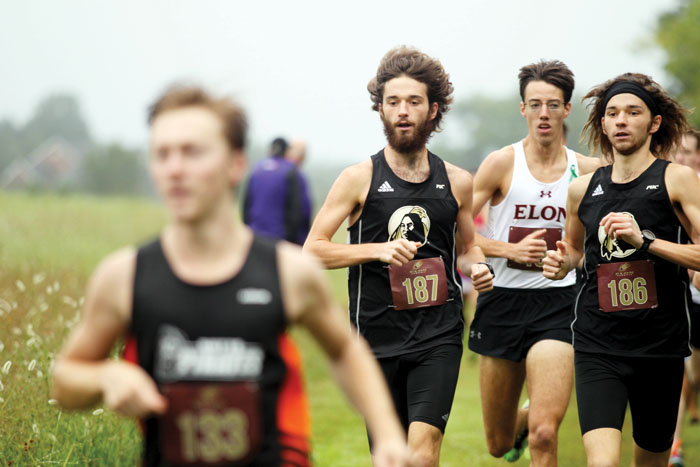 How long were the odds for these two Carson High graduates to get to this point?

Neither of them ever competed in a high school cross country meet. Imagine never playing a down of  high school football, and then not only making a Division II college roster, but moving into the starting lineup. That’s the territory where the Martins are now. They’ve accomplished something out of the ordinary. That’s why they pinch themselves every day to make sure they’re not dreaming it all.

“This has been a blessing, an amazing blessing for us,” Matthew said. “But the best thing about this is we’re not as good as we’re going to be. With every day, with every workout, we’re still improving.”

Proof of that came last Saturday morning for Matthew, who ran a career-best 8K  in the Peach Belt Conference Championships held in Columbus, Ga. Matthew was clocked in 25:21, almost a minute faster than he’d ever run before. His goal was to finish in the top 15 and make all-conference. He surprised even himself by finishing fifth. He was the second runner for a UNC Pembroke squad that placed second in the conference and boasted the individual champion in Kenyan Silus Kipkoech.

Jonathan’s career race had come two weeks earlier in the Florida State Invitational. He finished seventh in 26:06, the first top-10 finish of his career. He was the second runner for the Braves, who were the college division champions in the event.

When the Martins were in high school, they were heavily involved in school activities, interested in things like band and theatre. But they also were good athletes.

Jonathan stood out as an all-county tennis player in the spring months and was the No. 1 seed for the Cougars. That meant he got to compete against studs like Salisbury’s No. 1 Michael Ogden, who is now doing good things at N.C. State. Matthew played No. 4 singles for Carson tennis as a senior in the fall of 2014, and he and his brother combined to form a doubles tandem strong enough to qualify for regionals.

“We were busy with a lot of things in high school,” Jonathan said. “But looking back on it, the one regret I have is that we didn’t run cross country. Carson had good cross country teams, and we missed out on that. I wish we’d been part of it.”

The roots of running cross country for the Martins were in tennis. Getting fitter seemed like a good way to enhance their tennis games, so the Martins started doing extra running for conditioning purposes. By the time the twins enrolled as a tag-team at UNC Pembroke, they were running and training seriously, with the goal of competing in half-marathons (a little over 13 miles).

“We were running and training a lot, and before we went back to school for our second year, we talked about trying to walk on to Pembroke’s cross country team,” Jonathan said. “We emailed the coach (Peter Ormsby). We told him we could run 5Ks in the 17s and we were wondering if he was interested. He responded. He said he had a spot on the team for both of us.”

But it was a start.

The twins give Ormsby most of the credit for the strides they’ve made.

“We’re fortunate to have such a knowledgeable coach, and we certainly wouldn’t be where we are now without his workout program,” Jonathan said. “It’s also helped that we’re high-mileage guys. Even when we run 70 to 77 miles a week, our bodies can take it. Our bodies do well with it.”

Both Martins are 6 feet tall. Matthew weighs 150 pounds, while Jonathan is a bit lighter.

They room together, eat together and train together, but they don’t have identical strengths as distance runners.

“Jonathan is really good at holding pace,” Matthew said. “But I have a little more leg speed. We usually are running close together, and we balance each other out well.”

Prior to this school year, Orsmby put the brothers on scholarship. UNC Pembroke is a state-supported school and is affordable relative to most colleges, but that was still a huge moment for the brothers. Not so much for the financial windfall, but because it was recognition of their contributions to a successful program.

“When you’re walk-ons for two years and then go on scholarship for your third year, it really is a good feeling,” Matthew said. “It means that all that work we put in paid off.”

Since the Martins, who are religion majors and honor roll students, didn’t compete their first year on campus, they are now officially “redshirt juniors” in athletic terms. That means they will be eligible to run for UNCP again next fall, their fifth year on campus.

“We definitely do plan to take advantage of that extra year,” Jonathan said. “We really like how this team has come along. Four of our top seven are walk-ons or former walk-ons, and we take a lot of pride in that. We scrap, we grind, we compete.”

The Martins’ teammates include two other local runners — A.L. Brown’s Curtis Haynie and Kellen Corson. Haynie is often UNC Pembroke’s fifth runner and runs a lot of training miles with the Martins. Corson is likely to make an impact for the Braves this spring in track and field. He has a lot of speed and his forte is middle distance — the 800 and 1500.

While the Martins have experienced growth and success this fall, UNC Pembroke has another major meet coming up. The Southeast Region Championships are scheduled for Wingate on Nov. 4.

Both expect to move up this time.

“The regional should be good for us,” Matthew said. “We’re actually better suited for 10Ks than 8Ks. A longer race plays to our strength.”