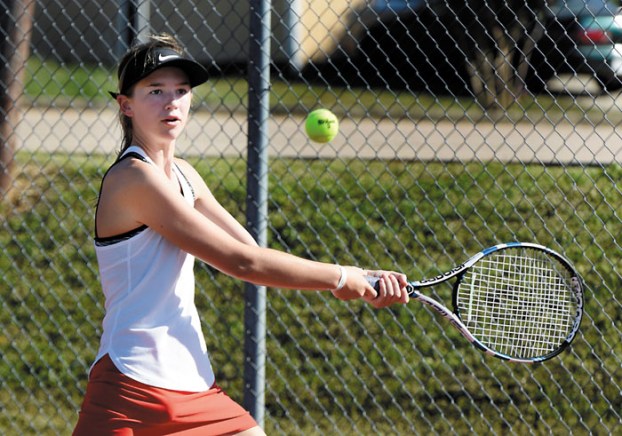 Wayne Hinshaw/for the Salisbury Post ... Meredith Burton is one of three Salisbury freshmen who have helped the Hornets move into the third round of the state 2A playoffs. Salisbury defeated East Montgomery on Tuesday, 6-0.

Salisbury tennis breezes in second round of playoffs

Salisbury tennis advances to 3rd round

SALISBURY —Longevity is a tough test, but so far the Salisbury girls tennis team is earning straight A’s.

The Hornets ornamented their season Tuesday afternoon with a breezy, second-round victory in the 2A dual team playoffs.

“We’re taking it one match at a time,” coach Milton Griffith said after Salisbury collected a 6-0 win against visiting East Montgomery. “The scores are what surprised me today. We were dominant, but I know when these girls play to their potential, this can happen.”

Salisbury (21-1) won its 16th straight match, sweeping all six singles matches and losing only nine games in 12 sets. The Hornets earned a third-round date at Surry Central, a 5-4 winner over Ashe County on Tuesday. Next Monday’s match will be at Surry Central, based on its 16-0 record.

“It’s nerve-wracking, getting this far,” said fourth-year letterman Maria Capito. “But it’s definitely brought us together as a team. That togetherness helps us prepare for what’s next.”

Capito, a senior left-hander, easily disposed of East Montgomery’s Elana Kellis, 6-0, 6-0 at first singles. “I wasn’t expecting it to be like that,” she said after improving to 20-1 this season. “We looked at records, but you can’t base anything on records. You just have to come out and play to win.”

“Those are the ones we had to have,” he said. “Most schools have their best players at one and two, so they were key. Team matches are usually decided at 3-4-5-6. We prevailed there today, but as we advance through the tournament they become even more important.”

Honeycutt, one of three seniors in Salisbury’s rotation, said she employed patience and persistence to whip Samantha Aguilar, 6-0, 6-1 in the day’s quickest match.

“We’re definitely over-achieving right now,” she said. “We have a great program and have had some great teams, but I’m really proud of all the freshman who have stepped up. I think it’s really cool to be a leader and show how things are done at Salisbury. We’re role models for the freshman.”

Three of those ninth-graders — Emma Nianouris, Lillian Rusher and Meredith Burton — came through for the Hornets.

“Well, it helps make us a good team,” said Rusher. “Everyone does their job. The placement of the girls is really good. The way (Griffith) does it, he makes sure every one of us has a chance to beat our opponent.”

Nianouris overcame a sluggish start and won for the 18th time in 20 decisions by stopping Mary-Beth McCaskill, 6-2, 6-0 at third singles.

“She was good at hitting cross-court and had a pretty good lob,” Nianouris said. “I’m primarily a net player, but she kept lobbing it over my head. I had to run a lot.”

Rusher used a bit of reverse psychology to down East Montgomery’s Yaricel Salazar, 6-0, 6-4. After ruling the first set with swift forehand and backhand shots, she found herself knotted 3-3 midway through the second.

“I was hitting the ball so hard,” she explained. “But (Salazar) always seemed to return it really well. So I starting playing backward — staying calm, keeping it in play and waiting for her to make the mistakes.”

“It felt like the first match of the season,” Burton said afterward. “I don’t know why but I had to push through it. Guess I was kind of nervous.”

Not for long. “Pretty quickly, I realized I was the better player,” she added. “I started lobbing a lot, making her move her feet and trying to be consistent.”

At No. 6 it was unbeaten senior Bethanie Stauffer — a state tournament qualifier — who extended her victory binge to 21 straight matches with a 6-0, 6-0 win against Allison Burr. The right ankle injury she suffered in Saturday’s regional was not a factor.

“I can’t even feel it right now,” she said with a warm, post-match smile. “It’s not all the time. Only once in a while I’ll feel it.”

Stauffer said she refrained from overplaying the ball and actually credited Jordan-Matthews, Salisbury’s first-round opponent, for helping prepare the Hornets for East Montgomery.

“We played such a solid team in the first round,” she said. “We figured there was a good chance we’d face someone softer in this round.”

East Montgomery (10-2) — the Rocky River Conference champion — had its seven-match winning streak halted, just six days after opening the playoffs with a 7-2 victory over Ledford.

“This is our first year in 2A,” said first-year coach Amanda Watson, a former Catawba softball player. “It’s a whole new level for us. We were ready to play, but with only one senior, for us to win the conference and reach the second round, that’s something to be proud of.”

When it ended, and Salisbury had met another challenge on the road to Burlington, Nianouris offered a bit of enlightment.

“What I’m learning is that teamwork is everything,” she said. “You can’t win a team tennis match by yourself.”

NOTES: Salisbury has won 10 state championships, most recently in 2013.

Stauffer will face two-time defending state champion Zoe Huffman of Maiden High School in this weekend’s state individual tournament at the Cary Tennis Center. Capito and Honeycutt qualified as a doubles team and will meet Owen’s Jaiden Tweed and Ashley Valencia in the first round. Nianouris and Rusher will team up against Lauren Bush and Annie Thomas of Lake Norman Charter in the opening round.