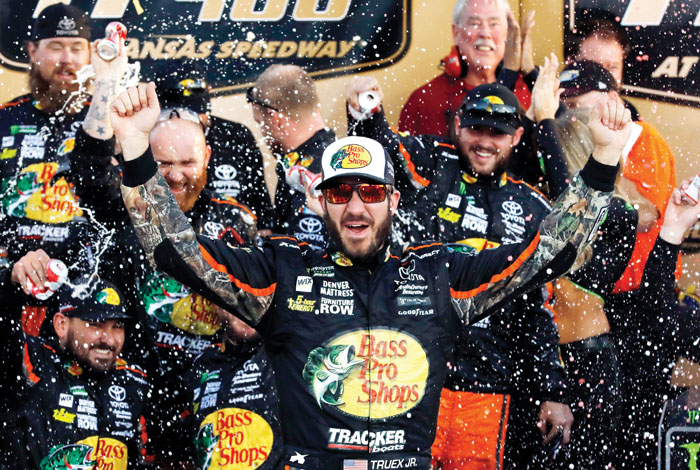 KANSAS CITY, Kan. (AP) — Martin Truex Jr. didn’t feel a sense of urgency to win Sunday’s race at Kansas Speedway because of its playoff implications, not with his spot in the next round safe following a victory at Charlotte.

No, the sense of urgency was much more personal.

Truex learned overnight that one of the Furniture Row Racing team’s crew members, Jim Watson, died of a heart attack while in town for the race. So with a heavy heart, Truex climbed into his No. 78 Toyota and overcame two early mistakes to win a wild playoff elimination race.

“We were racing for Jim today,” Truex said after emerging from his car. “He was a heck of a guy.”

Kurt Busch finished second before a wave of playoff contenders headed by Ryan Blaney, whose car failed post-qualifying inspection and was sent to the back. He quickly worked his way through the field and finished third, easily making it within the cutoff line.

Chase Elliott was fourth and Denny Hamlin fifth to punch their tickets to the next round. Kevin Harvick finished eighth to stay alive heading to Martinsville, while Kyle Busch finished 10th and Jimmie Johnson 11th — both of them also making the cutoff line.

Brad Keselowski was 13th after his win last week at Talladega sent him to the next round.

Kyle Larson blew his engine to spoil his chances of advancing, while a penalty on Matt Kenseth for having too many crew members over the pit wall following a wreck ended his championship hopes.

Jamie McMurray and Ricky Stenhouse Jr. also were eliminated from the playoffs.

“It’s a disappointing way to finish our race and probably our season,” said Larson, who had a 33-point buffer coming into the race. “I guess it’s sinking in as the second pass.”

Truex had dominated at Kansas for years before finally breaking through with a victory in the spring. And while he had nothing to lose Sunday, there was still a sense that Truex wanted to win his seventh race this season for his late crew member and the rest of their team.

“Still pretty surreal at this point,” crew chief Cole Pearn said. “We were all focused on what we had to do today. That was the best we could do for Jim. He was a true racer in the purest form.”

Truex is the first driver in series history with four straight wins on 11/2-mile tracks.

“I can’t say enough about all these guys,” he said. “Just really proud of them, and definitely we were racing with a heavy heart. Jim was a great worker and put a lot of speed in these Toyotas.”

Larson was the first of the 12 remaining playoff contenders whose chances were scuttled when he dropped a cylinder early in the race. He tried to limp on, but his engine finally let go.

Still, Larson held a fleeting hope of advancing when Erik Jones triggered a multi-car wreck on a restart with 70 laps to go, collecting McMurray and causing damage to Kenseth. The former champion thought he would be able to continue when he reached pit road, but seven crew members hopped over the wall for repairs — one more than is allowed under NASCAR’s damaged vehicle policy.

The penalty for the violation is an immediate parking.

“I don’t know what the rules are. It seems like we have a lot of stuff that is changed so often I can’t keep up with it,” Kenseth said. “You’re not able to race anymore? I just don’t get it.”

Larson still had to hope Johnson, who began the day on the bubble, would falter down the stretch. But despite two early spins, the seven-time champion managed to come home 11th to ease into the round of eight by nine points over a driver many pegged as a favorite should he get to Homestead.

“Freak things happen in every sport,” Larson said. “I’m not stunned, because it’s a long 10-race playoff season. Anything can happen. But we’ve had a solid playoffs.”