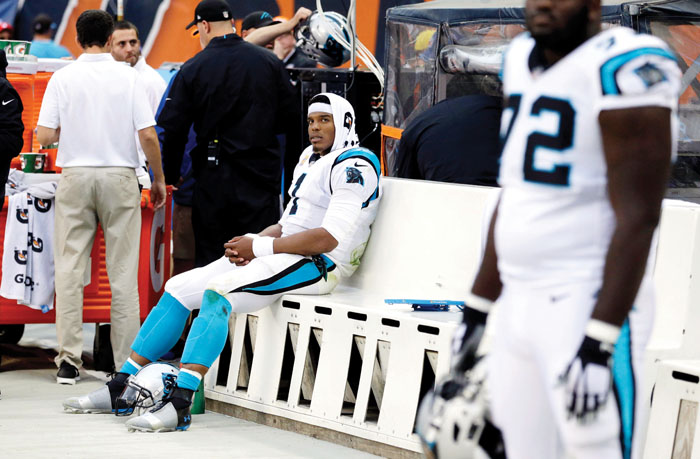 Carolina Panthers quarterback Cam Newton, left, sits on the bench during the closing minutes of the second half of an NFL football game against the Chicago Bears, Sunday, Oct. 22, 2017, in Chicago. Chicago won 17-3. (AP Photo/Charles Rex Arbogast)

He scooped up a loose ball and corralled a tipped pass. And with two long touchdown returns, he made NFL history.

Jackson became the first player to score multiple defensive TDs of 75 yards or more in a game, leading the Chicago Bears to a 17-3 victory over the Carolina Panthers on Sunday. He’s also the only rookie in NFL history with two 75-yard defensive touchdowns in a season.

Jackson’s big day came exactly one year after he broke his leg playing for Alabama against Texas A&M.

“I’d dealt with adversity before,” Jackson said. “That’s one thing that I can credit Alabama on. They help you fight through adversity. I’ve been through a lot of stuff in my life. That was just a little minor stepping stone. I came here — it’s a great organization, great training staff and great teammates so they did a great job keeping me up, keeping me going.”

Jackson ran back a fumble recovery 75 yards on the game’s opening possession and returned an interception of Cam Newton 76 yards for a score early in the second quarter to give Chicago a 14-0 lead.

He became the first Bears player since Fred Evans in 1948 — and the first NFL player since Tennessee’s Zach Brown in 2012 — with two defensive TDs in a game.

The big plays by Jackson and the defense lifted the Bears (3-4) to their second straight win even though they got dominated in just about every statistical category.

“Those two turnovers hurt us and we just couldn’t seem to get our (footing) back,” said Newton, who completed 21 of 34 passes for 211 yards and ran for a team-high 50.

“We didn’t make plays, we really didn’t,” coach Ron Rivera said. “We were very methodical. We moved the ball. We got in certain situations and they bowed their neck and did some good things defensively. Offensively, they did what they needed to do.”

Chicago’s Mitchell Trubisky was 4 of 7 for 107 yards in his third NFL start. The No. 2 overall pick threw a 70-yard pass to Tarik Cohen, but did little else.

Jordan Howard also had a quiet afternoon, even though Panthers star linebacker Luke Kuechly missed the game because of a concussion. He ran for just 65 yards after going off for a career-high 167 against Baltimore last week.

The Bears matched last season’s win total and put together back-to-back wins for the first time since 2015 — coach John Fox’s first year in Chicago.  They have six takeaways in the past two games. And against the Panthers, Jackson asserted himself right from the start.

A fourth-round draft pick, he scooped up the loose ball near the end zone after Curtis Samuel botched a lateral and was barely touched if at all on the way to the end zone.