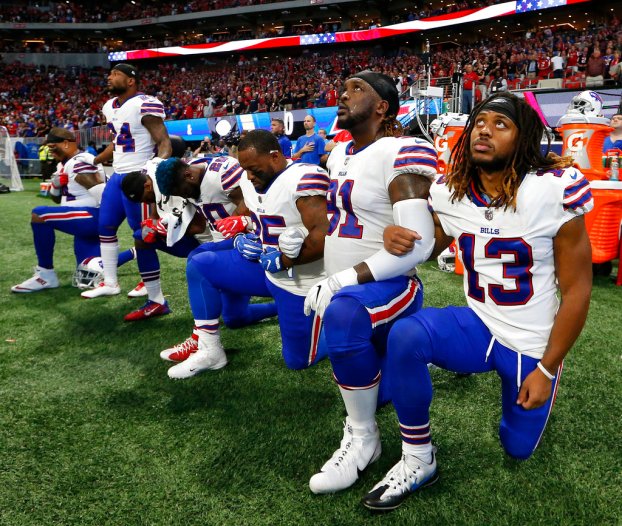 Buffalo Bills players take a knee during the national anthem before the first half of an NFL football game between the Atlanta Falcons and the Buffalo Bills on Oct. 1 in Atlanta. (AP Photo/John Bazemore)

Letter: Do you still want to take a knee?

Before you answer, let me quote from Frederick Douglass’ July 5, 1852 address “What to a slave is the 4th of July?” Douglass was a self-educated runaway slave, best-selling author, lecturer, editor, activist, campaigner for women’s rights and counselor to presidents.

“The rich inheritance of justice, liberty, and independence bequeathed by your fathers, is shared by you, not by me. The sunlight that brought life and healing to you, has brought stripes and death to me. This 4th of July is yours, not mine. You may rejoice, I must mourn. To drag a man in fetters into the grand illuminated temple of liberty and call upon him to join you in joyous anthems, were inhuman mockery and sacrilege to many … Fellow citizens above your national tumultuous joy, I hear the mournful wail of millions whose chains and grievous yesterday, are, today rendered more intolerable by the jubilee shouts that reach them.”

We are missing the point. “Taking a knee” is conflated with Black Lives Matter, alleged police brutality, respect for veterans, racism and white privilege, its roots reaching into Douglass’ “dragging men in fetters into the grand illuminated temple of liberty.”

In context, frustration is easily understood. Is the NFL pre-game ceremony the appropriate venue to vent frustration? Do those making more in a season than many of us make in a lifetime, possible only in America, have reason to complain? Are there better ways to protest? What comments might Gandhi and Martin Luther King Jr. have offered? Does anyone understand the real motivation?

Perhaps Douglass would be a better role model than a second-string quarterback. He was an example of what can be achieved in adverse circumstances, by education, intellect, rhetoric, most recently exemplified by the successful careers of King and Barack Obama.

Clyde, Time Was: Thing you ‘had to have’ could wind up in a yard sale

Time was, they gave us Green Stamps. With every purchase came a reward. But you had to work for it,... read more