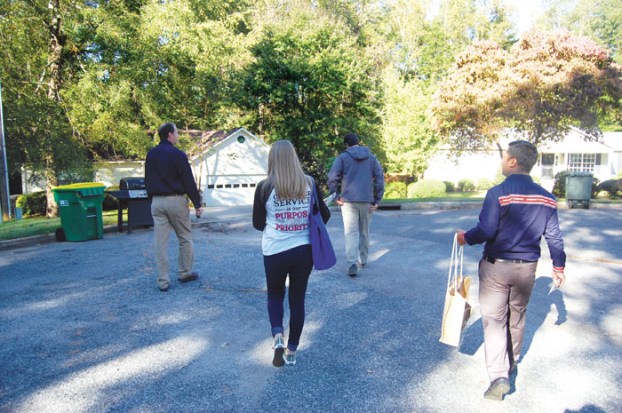 SALISBURY — City communications director Linda McElroy said the community engagement walks began with a simple mission: Get residents to sign up for Nixle.

“We really try to push Nixle because we feel like folks being notified and being in the know of what’s going on is very important,” McElroy said. If city staff members could go to residents’ houses and say, “I’ll sign it up for you on your cell phone right now,” that would encourage more folks to join the service, she said.

Nixle is a text message service that sends alerts when city services will be altered or when city events are being held.

From there, McElroy said, the weekly walks took on a greater purpose.

“After thinking about it, it morphed into Parks and Rec (wanting) to be involved and other departments saying, ‘Hey, we have stuff going on, too,’” McElroy said.

She said there have been occasions where the city staff members, who come from nearly every city department, have carried stacks of seven different event fliers.

The first community engagement walk took place on April 28 and, barring several Fridays with severe weather, has happened every Friday since.

Their most recent walk happened Friday in the Milford Knoll subdivision at 9:30 a.m.

“I have a huge map of the entire city, which I think it’s 21.7 square miles. And we look at the different spots where I have been or haven’t been,” McElroy said. “Depending on our group size, we can tackle three blocks or three streets in one neighborhood or sometimes we’ll only get one.”

McElroy said that, among city staff, “it is understood that Friday is community engagement.”

“And it’s interesting because folks who have never been on a walk and it might be their first time, they are surprised at, one, how much fun it is. But then actually seeing residents face-to-face, they’re like, ‘Wow, I didn’t realize how fun and exciting this is,’” McElroy said.

McElroy said there are usually enough city staff members to make two groups who then go to houses separately. Each group has a clipboard for writing down citizens’ concerns, critiques and compliments.

“And then we take those back to the office and send out a larger email to say, ‘123 Main St. has this issue going on. Who can help her?’” McElroy said.

She said their goal is to be as responsive as possible. She said there was a time when a woman wanted a new recycling bin and, by the time the community engagement team had walked to the end of her street, the recycling bin had been replaced.

McElroy said staff has also gotten a number of interesting stories from the engagement walks.

“(One city employee) got sprayed in the face with air freshener by a toddler during one of their visits. … We went to one home where the resident said he thinks there was a bobcat and 15 pit bulls living in the house across the street. That turned out not to be true,” McElroy said.

But she said that the most important part of their walks is meeting residents face-to-face.

“We’ve met residents who have said, ‘Y’all are doing some great outreach.’ And you don’t find too many cities who actually get out of their office, walk a neighborhood and meet the residents,” McElroy said. “Because we often ask them, ‘Please come to City Council, please come to a meeting, the Empire Open House.’ And a lot of folks either can’t get out of their home (or) don’t like travelling at night. And so this is an opportunity for us to get out of our office and meet people where they are, which is in their homes.”

McElroy said they choose the neighborhoods by looking at a black-and-white map that she has in her office.

“And then, once we finish that neighborhood, I highlight the road and the blocks in pink,” McElroy said. “So, at the end of this — which I’m hoping by the end of next year — we will have a majority of that map already covered in pink.”

Even after the map is covered in pink, she said, the city plans to continue the walks so staff members can reach new residents who may have moved into neighborhoods since they last walked them.

The city has been nominated for a PRSA Charlotte Queen City Award for the community engagement walks.