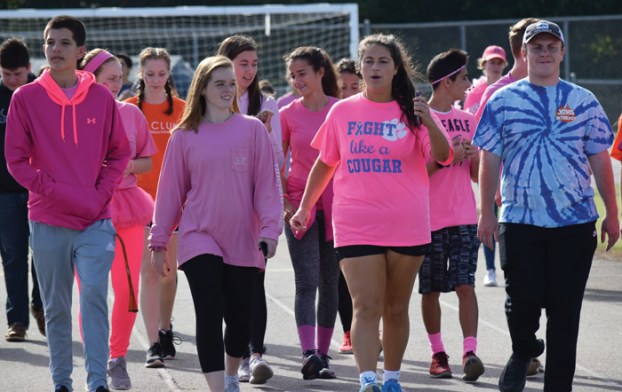 Carson staff and students talk as they walk around the school's track to benefit local breast cancer organization Focus on a Cure. Members of the school's Interact Club wanted to do something to benefit the larger community, and said they're touched by how the school has come together around the event. Rebecca Rider/Salisbury Post

It’s the first year Carson has held a walk-a-thon for breast cancer awareness, but organizers say they hope it won’t be the last.

The event was sponsored by the school’s Interact Club. Usually, club advisor Melinda Miller said, the club does things like read to students at Bostian, or work with fellow students who are special needs.

“But they wanted to do something more — reach out in the community,” Miller said.

It was club president Mollie Goss who suggested a walk-a-thon. Goss said she thought it would be a good way to pull the school and surrounding community together.

“Anyone can walk,” she said.

But then club vice-president Paige Eagle came up with the idea to give proceeds to a local breast-cancer organization. Focus on a Cure is based in Kannapolis, and helps women with breast cancer in surrounding counties afford check-ups, screenings and other medical treatments.

And she knows the work Focus on a Cure does, first-hand. When Eagle was 7 years-old, her mom was diagnosed with breast cancer.

“At the time I didn’t know the full extent,” she said. “I knew my mom was sick.”

Focus on a Cure stepped in and helped cover medical expenses, and helped Eagle find a group of other children whose mothers were also fighting cancer. Eagle recalls that the group made pillows they could throw or punch if they were upset, and were told to drop a button in a jar and pray any time they were worried.

Eagle’s mom has been cancer free for 11 years now, but the two still work closely with Focus on a Cure — helping out however they can. During a recent interview with the organization, Eagle found out why her mom fought cancer so hard.

“She was talking about how the only thing that got her through was wanting to see me graduate from high school — that had a really big impact on me,” she said.

Eagle will graduate from Carson in May; but before she left the school, she wanted to do something to give back. When Goss brought up hosting a walk-a-thon, Eagle recommended Focus on a Cure.

“So we decided to do something financially to help people when they’re going through a stressful time,” Miller said.

All proceeds and donations from the walk-a-thon will be donated to Focus on a Cure. Though the event was small — just advertised among the student body and their families — the group managed to raise $200 before the walk even began. People in the community could sponsor someone to walk a certain amount of laps, or just donate to the cause.

Miller said she was extremely proud of her students.

“They’re a very thoughtful, amazing group of kids,” she said.

For Goss, the event showed the spirit of Carson — that students and school community would come together on a weekend to support one of their own.

“It shows that people do care about stuff,” she said. “…It shows that we can all work together for one goal.”

‘It will make you young again:’ Jack Connery chronicles his life in memoir

By Susan Shinn Turner For the Salisbury Post When Jack Connery’s last uncle died, he realized there was no one... read more