Can you make the Great Escape? Local couple sets up puzzle room 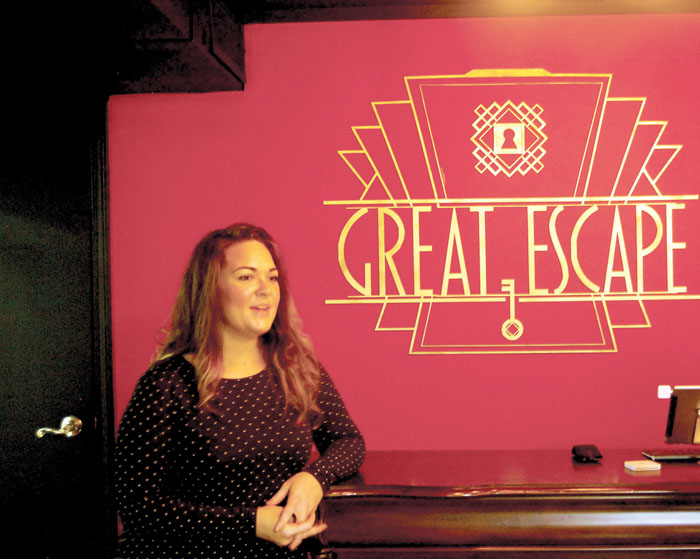 Abby Cummings, coowner of the Great Escape, discusses how she and her husband, Josh, created the escape rooms. (Emilee Hibshman/Salisbury Post)

SALISBURY — Abby Cummings and her husband, Josh, first bonded over a love of thrift shopping.

“I had never met a guy who had my love for vintage things, so we actually went thrifting together a lot. And I’m like, ‘I love this guy,’” Abby said.

Abby said that she and Josh have something else in common as well.

“I’ve been an entrepreneur ever since I was young and so was my husband, with him selling Pokemon cards and I would sell my lunches,” Abby said. “So we wanted a way where we could start a business, not be too brand new so we think we might fail — so we feel like escape rooms (are) a safe bet right now — and also be able to show who we are in our business, which is thrifting and finding vintage things.”

Thus, the Great Escape — located in the basement of the Heritage Room at 118 E. Council St. — was created.

Abby said that she and Josh had only participated in two escape rooms before — one in Charlotte and one in Concord.

“Then, after we did escape rooms ourselves, we kind of looked into it and we saw how much they were charging per person and how often it was booked. So we were like, ‘Hey, you just buy some things and let people pay us for looking at the room and, hey, we got some money,’” Abby said.

Josh said that each of the rooms is like a time capsule.

“So it’s not just like an office space with puzzles in it. That’s what makes us more unique, I think,” Josh said. “We’re not saying everything here is from 1890, but it can pass.”

Abby said that she had spent months looking for the right pieces for each room, ones that she calls “era-appropriate.”

“All of the items in the room, for the most part, are genuinely vintage. We went to auctions, estate sales, Facebook yard sales, whatever, just to find those pieces to really bring to life the era that we’re trying to portray in our rooms,” Abby said.

In addition to having a place to showcase their vintage treasures, Abby said that she and Josh are hoping their escape room can “bring some more life” into Salisbury.

“I think, as millennials, we’re all looking for something fun to do that’s not (a) movie theater. We want to interact and do something. We’re all about new, upcoming, different. So I feel like that’s what this is. It’s like a board game that’s real life,” Abby said.

Abby said that they are also hoping to have another one open by the beginning of November: a 1960s asylum.

For more information or to make reservations, call 704-798-4690 or go to www.greatescapesalisbury.com.