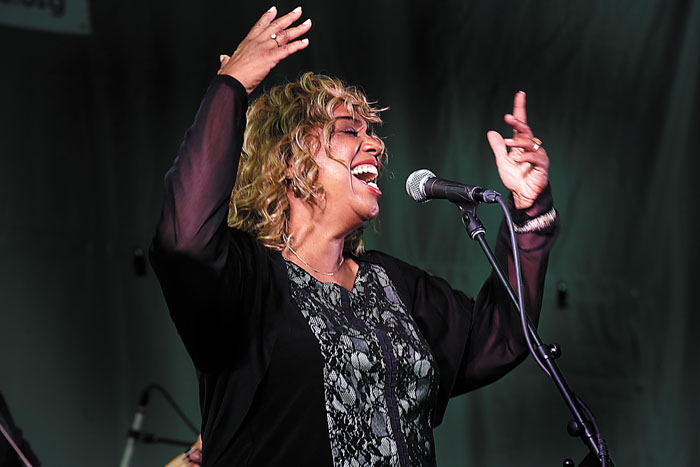 SALISBURY — It’s been roughly 19 years since Eleanor Qadirah kicked off the Rowan Blues and Jazz Festival, and the event is still moving to a smooth rhythm.

Held Saturday in the parking lot on the corner of Fisher and Church streets, the event drew in musicians and music appreciators from all across the Piedmont — and a few from out of state.

Qadirah said she started the festival — and its sponsoring group the Rowan Blues and Jazz Society — after she returned to Salisbury after living in New York.

“I was retired and didn’t have anything to do,” she said. “Liked music.”

Qadirah had always loved jazz music. She often attended jazz concerts at Livingstone College when she lived in Salisbury, and weaved herself into the jazz scene when she lived in New York. After she retired, Salisbury seemed like the perfect ground to grow a music festival.

“I came to Salisbury and saw everyone involved in the arts,” she said, “and one thing was missing: Jazz.”

So Qadirah helped found the festival, and the Blues and Jazz society — though she said she’s much more fond of jazz than blues.

And the reunion theme held true for more than just the musicians. Qadirah said that her family had recently connected to some long lost branches, turning up a gaggle of cousins and other relatives that Qadirah got to meet for the first time Saturday.

But they weren’t the only new faces swaying to the beat Saturday.

Debbie and Bill Tobey are brand new to Salisbury — the couple retired here a week ago from Denver, N.C.

“We just wanted to retire in a nice, small down,” Debbie said.

But in between closing on their house and learning Salisbury’s history through a downtown ghost tour, the Tobeys also ran into Qadirah. Bill said he and Qadirah met Friday at the FedEx store, and got to talking.

After hearing about the Blues and Jazz Festival, they decided to unpack their folding chairs and see what Salisbury had to offer. Debbie said she’s a fan of the music genre.

“I’m just kind of enjoying everything,” she said.

Others, like Jcqulyn Myers and her family, came from further afield. Myers is from Cheraw, S.C., but the family has close ties with the McBrides of Rowan County — it was how she heard about the Blues and Jazz Festival.

She, her husband and several grandchildren, camped out in the shade, enjoying the music and the “peaceful atmosphere” of the festival.

Jeff Sharp, one of the festival’s organizers, said the event was special because it wasn’t often to find something that could pull people together across racial lines.

“This is one thing we’ve been able to create where people of all communities get together and have a good time,” he said.

The festival is sponsored in part by the Rowan Arts Council and the Rowan County Visitors and Convention Bureau.