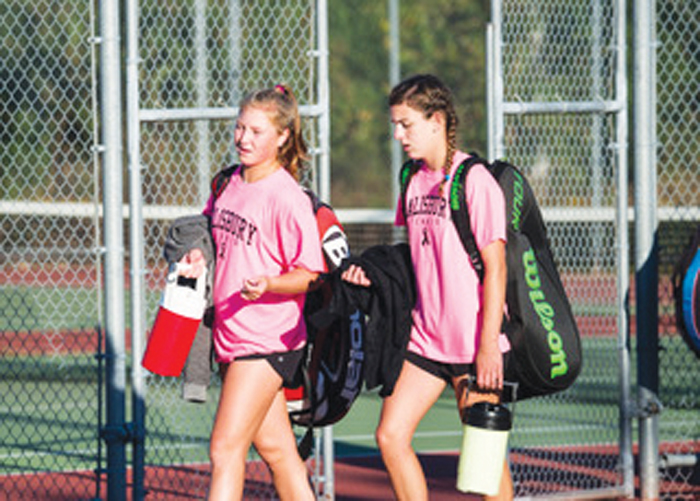 Submitted photo by Jimmie Anderson Salisbury's doubles team of Julia Honeycutt, left, and Maria Capito, won in regional tennis action on Saturday and advance to the 2A state tournament. Oct. 21, 2017.

Salisbury hosted the 2A Midwest Regional individual tennis tournament Friday and Saturday and sent five players to the state tournament.

The doubles final was all Hornets, with seniors Maria Capito and Julia Honeycutt winning against their freshman teammates Emma Nianouris and Lillian Rusher, 6-1, 6-1.

Capito/Honeycutt won against North Surry’s Katherine Parsons/Callie Willard, 6-0, 6-1, in the first round. Nianouris/Rusher won 4-6, 6-4, 6-1 in the first round against Surry Central’s Sarah Marion/Haily Robertson.

Pardue/Wyble won the match for third place against the Ledford girls.

Salisbury senior Bethanie Stauffer plays No. 6 for the Hornets when everyone is present, but she finished fourth in singles in the regional to qualify for the state tournament.

Stauffer lost by default to Yinka Mason of Atkins in the third-place match.  Mason won a tiebreaker 7-6 (7-5) in the first set.

Salisbury’s Meredith Burton lost to Mason in the first round, 6-1, 6-1.

West will play at top-seeded North Iredell (23-2) for the fourth time on Tuesday.

OLIN — West Rowan had some struggles early but came on strong and beat North Iredell, 47-15, in North Piedmont Conference action on Friday.

The Falcons had five rushing touchdowns. Jayden Jones had scoring runs of 66 and 11 yards. His 66-yarder put West on the board.

Stolsworth’s first connection with Houston gave the Falcons the lead for good at 14-12 late in the first quarter.

The Mustangs trailed 63-7 going to the fourth quarter.

Noah Green got the other two scores for the Mustangs on fourth-quarter runs.

Pope added a receiving TD on a trick play late in the second quarter.

Pope watched the second half from the sideline.

Trey Page caught four passes for 125 yards and two TDs in the first half,  while Tavis White caught five passes for 162 yards. He had a receiving TD and two rushing TDs.

Medley’s 33-yard scoring pass to Antonio Knight gave the Wonders a 7-0 lead. Malik Keller scored on a punt blocked by Jalen Goode for a 14-0 lead.

Medley’s 22-yard scoring pass to Jalen Nixon came late in the first half and stretched the Wonders’ lead.

Medley, who had 150 passing yards, hit Nixon with another TD pass for the Wonders’ only score of the second half, but the Wonders’ defense made a 28-3 lead hold up.

The Wonders had three interceptions, including two by Jaran Young. Justin Holsclaw had the other one.

A.L. Brown overcame 150 yards in penalties and has won seven in a row.