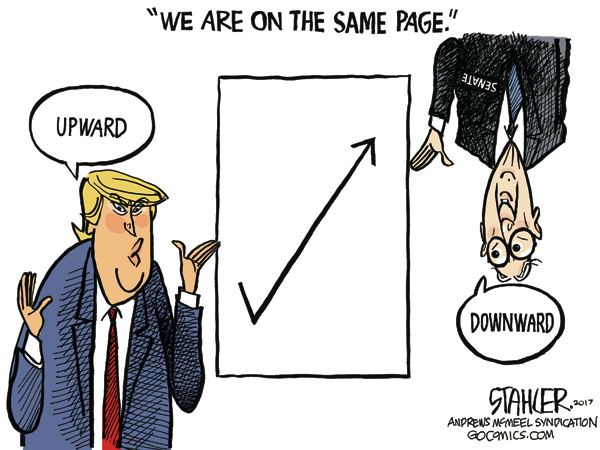 Few stories are more irresistible than those that take on the conventional wisdom and come from an unexpected source. Doug Sosnik, a smart operative in Bill Clinton’s White House, provided both with a column this month suggesting that Donald Trump is well-positioned for re-election.

The Trump base is solid, the Democratic strategist notes, as the president’s appeal to populist anger transcends his leadership failures. There will likely be independent candidates in 2020, so, like last year, Trump can win without a majority of votes.

Sosnik’s column has led to panicked calls from some Democrats and to provocative chatter on politics sites like FiveThirtyEight, while Trumpites, not surprisingly, welcomed his analysis.

It’s all interesting — and irrelevant. Informed speculation awaits answers to these five questions:

No. 1: Will there be an economic downturn in the next three years, ending an already 99-month expansion, the third longest in modern U.S. history?

Some economists and investors anticipate years of good times, including a stronger-than-expected global economy. The U.S. recovery from a deep downturn has been only modest, creating more leeway for a longer upturn, some potential benefits from regulatory changes, and the expectation of a corporate tax cut.

More analysts believe that the business cycle hasn’t been repealed, and that the bubble will burst sometime in the next two years. Trump would then blame others — the Federal Reserve, Democrats, China, Gold Star mothers — but a recession would strike hard at his working-class base.

No. 2: Will the impetuous commander-in-chief launch a war, specifically a nuclear confrontation with North Korea?

Trump and Kim Jong Un are not the leaders anyone would wish to have for a potential face-off. But more informed and responsible top administration figures see increasing odds of a military response to the North Korean nuclear threat. The desired scenario: minimal deaths and a non-nuclear North Korea dominated by China. More probable would be massive casualties, chaos on the Korean peninsula, and a possible conflict with China.

No. 3: Will Democrats win control of the House next year, and reject a left-wing agenda for the 2020 presidential contest?

Democratic control of the House, with oversight and endless investigations, would be a nightmare for the ethically challenged Trump administration. It probably would produce legislative stalemate. But there would be internal pressure on Democrats from the left, and Republicans hope 2020 could be a reprise of 1972 and George McGovern.

No. 4: Will the 71-year-old Trump have health problems?

The second-oldest U.S. president is not expected to release the results of a full physical examination as his recent predecessors have, just as he won’t release his tax returns. During the 2016 campaign, he issued a limited report from a family doctor. He is overweight, bordering on obese, and tries to hide it with loosely tailored suits and long ties hanging below the waist. He doesn’t believe in exercise other than golf.

Some experts have also expressed concerns about his cognitive health, as described in a lengthy investigation by Stat, a respected health and science site, earlier this year. Under the 25th Amendment, the vice president and a majority of the Cabinet can act to remove an incapacitated president. Given the current cast, this isn’t going to happen, especially since Trump would contest it.

No. 5: Will special counsel Robert Mueller’s investigation into Trump and the Russians lead to indictments that implicate the president?

The spin from the White House is that it is cooperating fully with Mueller to wrap up the inquiry quickly. The aim of that claim is to give the White House a pretext to attack the special counsel for prolonging a probe. It won’t work. This investigation is thoroughly professional. It is diving deeply into any evidence of collusion between Trump operatives and the Russians in the 2016 campaign; into any possible obstruction of justice of the investigation by the president this year, as well as into financial dealings that may date back years.

There appear to be several easy indictments, maybe even imminent. It’s less clear this leads to Trump.

Short of that, even if Democrats take the House, impeachment is a non-starter. Republicans, seeing how Arizona Sen. Jeff Flake, an honest anti-Trump conservative, has been savaged, duck for cover. Republican Sen. Lindsey Graham of South Carolina, once a Trump critic, has become a cheerleader and enabler for the president.

While Trump is sui generis, history offers guidance on the folly of predicting distant elections. At this moment in 1989, George H.W. Bush, having kept his promise not to raise taxes and with communism collapsing, seemed invincible. Three years later, he was defeated. In 2009, Barack Obama was in trouble, with unemployment soaring to 10 percent, up sharply from what it was two years earlier, and with his major health-care initiative seemingly stalled in the Senate. Three years later he was re-elected.

If the answer to five questions is no — but only if to all of them — Sosnik is ahead of the curve.

Albert Hunt is a Bloomberg View columnist. He was the executive editor of Bloomberg News, before which he was a reporter, bureau chief and executive Washington editor at the Wall Street Journal.