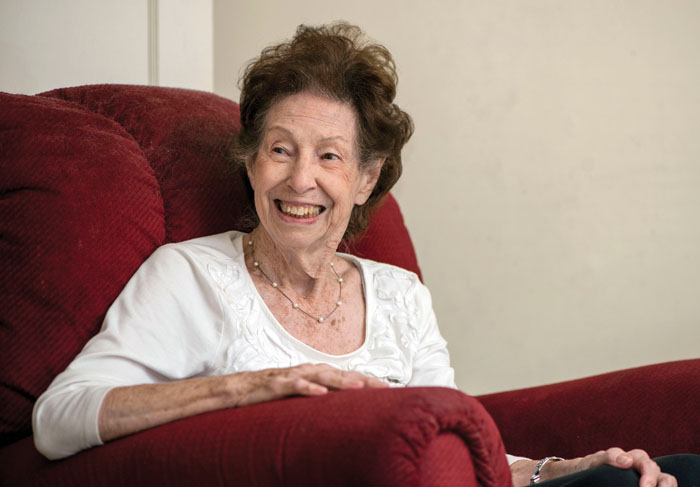 Clara Elizabeth McLaughlin didn’t grow up wanting to be a teacher. She planned to be a nurse and went for nurse’s training at Bowman Gray Hospital in Winston Salem. All was well until the blood started to flow. Nursing was out and teaching was in. What followed was teaching 42 years in elementary education, 60 years in Sunday School and a life well lived.

Clara graduated from Lenoir Rhyne College with an Elementary Degree and took her first job in Maiden, NC teaching second grade at Maiden Elementary. She said, “Most of the children walked home for lunch and so did the teachers, all except one. She stayed behind to eat with the rural kids who went to school on a bus and brought their lunch. The teachers took turns staying with them.”

A young man back home named Ed Turrentine noticed Clara at a dance and did the Bunny Hop while holding her waist, just before whispering his interest in her ear. Clara said, “None of the young men had cars and most used their dad’s. Because of gas rationing, we usually had a car full on our dates.” Still the process worked somehow and Ed and Clara were married in 1949.

The newly married Clara Turrentine went to work at Enochville Elementary next, this time teaching second grade. Teachers usually had to stop teaching immediately when found to be pregnant, but Mrs. Turrentine was allowed to work until Christmas. Once her daughter, Josephine, was born and squared away, she moved on to teach at Landis Elementary for Principal T.F. Bostian. Landis would be her teaching home for the next 38 years.

Remembering those early years at Landis, Mrs. Turrentine smiled and said, “We always had greasy wooden floors because they put oil on them. The desks were bolted to the floor and the bathrooms were at the end of hallway.” But it was the kids that she remembered most. She added, “The kids were so obedient and so attentive. They were no trouble. Going to school was something new. There was no kindergarten then. Children had more respect for each other than they do today and they loved being in school.”

Elementary school teachers in the early 50s had the same kids all day and taught art, music and even physical education. Clara remembered, “The kids were just so good that we would have staff meetings while we left the kids in the rooms by themselves. There was no need for assistants. If I did have a problem and had to paddle a child, then it was done out of sight of the others in what we called the cloak room, where everyone hung their coats at the beginning of the day. I didn’t have to paddle often.”

One of Mrs. Turrentine’s favorite times at school was her reading circle. “I brought a quilt to school and sat on a very small chair while the kids sat on the quilt. I read to them and would ask them questions afterward. They knew what I read. Most of them didn’t have many books at home.”

Teachers in those days had a blackboard, chalk, a record player and eventually a mimeograph machine to make copies, made one at a time and with that unusual smell. Classes prepared a play each year for what was called “Chapel Time” in the auditorium where it was presented to the whole school. Boys often wore overalls to school and girls wore dresses. Mrs. Turrentine remembers, “The boys sometimes struggled getting their overalls back on while in the bathroom and I often helped them do it. Otherwise, we would have been waiting quite a while to resume class.”

Clara McLaughlin had grown up in the current Corriher Grange area on Jackson Road. Her own first and second grade education was in Corriher School where she remembers a big wood stove in the center of the school room. For bathroom breaks, the boys headed to the woods and the girls went to a little shanty. Third through 11th grades were at Landis where she would later teach and be honored as “Teacher of the Decade” for 1970-1980 by S.P. Teague, Principal. Mrs. Turrentine also was honored as 1983 Teacher of the Year.

When Landis Elementary School moved to the “new” building, the former Aggrey Memorial High School, Mrs. Turrentine said, “We loved it. Carpet on the floors, connected rooms and much more modern. The Dick and Jane books were popular then. We used computers as teaching aids during my last two years there.” She worked with principal Tina Hall and teacher’s assistant Chevis Whitaker.

Besides a teacher’s assistant, a PE coach came about once a week, a music teacher about every two weeks and an art teacher once a month. Mrs. Turrentine remembers a field trip to see the largest tree in Rowan County, a follow-up to her class studying trees.

Following her retirement in 1989, Mrs. Turrentine became an almost daily visitor to the J. Fred Corriher YMCA, participating in the 8 a.m. aerobics classes and walking on the indoor track. She continued to teach Sunday School classes at First Baptist Church in China Grove until walking became difficult over the past two years. Mrs. Turrentine said, “I have been a member at my church for 50 years and was recently told by our pastor that I am now the oldest living member.”

Daughter Josephine (Jo) Turrentine Sorrell now lives in the Boone area and has recently retired herself after 35 years of teaching and serving as librarian. She said, “I never wanted to be anything but a teacher, well, after I decided that I didn’t want to be a princess, anyway. I watched my mom and so enjoyed helping her when I could. I wanted to be like her.”

Always known for her quiet voice, Mrs. Turrentine remembered one student saying, “Better watch out, Mrs. Turrentine is getting mad because she is getting louder.” But those students, more than a thousand of them, remember their first-grade teacher. Mrs. Turrentine still gets stopped when out somewhere and often hears, “Do you remember me?” Once the former student tells their name, Mrs. Turrentine can usually think back to that particular class and where that little boy or girl sat in her room, and a few more memories.

Ed Turrentine passed away after 53 years of marriage, but one sister, Virginia Sutton still remains. Mrs. Turrentine has Jo, three grandchildren and soon to be three great-grandchildren.

But to the rest of the world, she will always have many more children than that.

Postscript: I was one of those students. My own first-grade experience in Mrs. Turrentine’s class was something that I have always cherished. She instilled in me a love for reading and the first building blocks to a love for education. As a small boy, I was fortunate enough to know her in the classroom setting and well past that to this day. Inspiration is a powerful word but it certainly applies to what Clara Turrentine has done for so many and still continues to do. I, for one, am extremely glad that the nursing thing didn’t work out and I found her as my teacher on that very first day of school. Thank you, Mrs. Turrentine!     — David Freeze