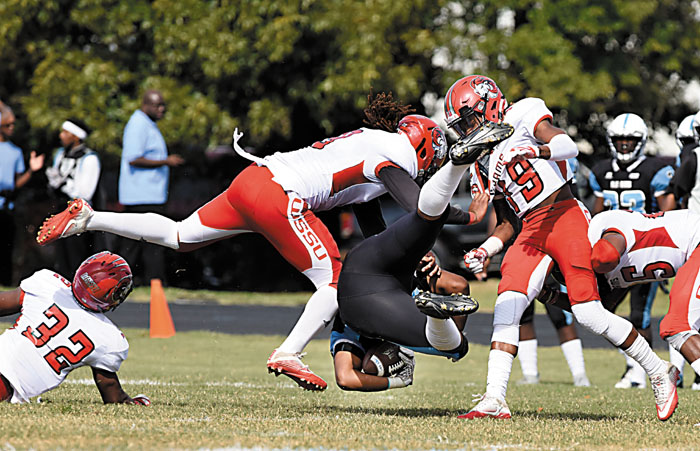 The Blue Bears continued their descent to the bottom of the CIAA’s Southern Division standings Saturday at Alumni Stadium, where visiting Winston-Salem State carved out a 42-14 win.

“The wheels didn’t come off,” coach Daryl Williams insisted after Livingstone (0-8, 0-5) dropped its 11th straight decision. “It was self-inflicted wounds. We still have two games left and the wheels are still on.”

Maybe so, but Livingstone spent the better part of a sun-splashed afternoon trying to regain its balance. Against defending league champion WSSU (5-3, 3-2), its defense yielded 308 yards rushing, its offensive line allowed seven quarterback sacks and its special teams surrendered a back-breaking 87-yard kickoff return for a touchdown that launched the second half.

“It’s the same old song and dance,” senior defensive end Armond Cox grumbled after making eight tackles. “We’ve got to eliminate our mistakes. This was a good game in the first half, but we started making little mistakes and it slipped away.”

It did — and it happened abruptly. The Rams scored twice within 28 seconds late in the first half to build a 21-7 lead, then cracked the game open when Jahiz Linebarger — a transfer from Lenoir-Rhyne — gathered the second-half kickoff and sped down the left sideline like a point-guard leading a 3-on-1 break.

“We rarely have any breakdowns on special teams,” Williams said. “I have to go back and look at the film to see what happened. That was unbelievable to me.”

It wasn’t to winning coach Kienus Boulware, whose team was still smarting from last week’s fourth-quarter collapse against St. Augustine’s.

“The key after a loss is not to let a loss beat you twice,” he said. “This was much-needed for us. That second quarter gave us some breathing room and something to celebrate. And usually, the team that has the most fun is going to win.”

Livingstone, which hasn’t won since topping Shaw University on Oct. 15, 2016, found something to cheer about late in the first quarter. The Blue Bears trailed 7-0 when WSSU quarterback hurried a pass that was deflected by Cox and picked off by teammate Blake Hickman. His 41-yard interception return for a touchdown tied the score and turned the LC stands into a human trampoline.

“It got deflected and I just happened to be there,” said Hickman, a senior linebacker. “It definitely gave us some confidence, brought us to life and gave us an edge to play harder. But at the end of the day, there wasn’t enough execution. You’ve got to play through — and we didn’t.”

Instead, the Blue Bears offered up another square-wheeled finish. Quarterback Xavier Longerbeam — who completed a 39-yard pass Brandon Duncan on his first attempt — ended the game on the sideline after re-injuring his left shoulder. He did score LC’s second touchdown on a too-late-to-matter sneak play nine seconds into the fourth quarter.

“Yeah, the first play was big for us,” Longerbeam said, after finishing 5-for-10 for 62 yards. “But then we had two false starts in a row and that killed our momentum. Everything seemed a little off. We weren’t getting a good enough push up front. That’s got to get better.”

Livingstone was held to 80 yards on the ground and 93 in the air. The Rams were paced by running backs Farrell Murchison (96 yards, one TD) and Kerrion Moore (100 yards/6 carries), who suffered a left ankle injury when he was high-lowed following a 16-yard, first-period pickup that knocked him out of action. Before he left he gave the Rams an early spark with a 66-yard touchdown burst that opened the scoring.

“He’s one of the best backs in the conference,” Williams said. “But we just missed tackles on that play. We put eight in the box and all eight missed him.”

Williams wasn’t turning cartwheels over the Blue Bears offense, either. “Before we fix the defense, we’ve got to sustain a drive. They’re getting too many plays on the football field. It comes down to the whole offense. At times the offensive line didn’t block. At times the running back didn’t stay with the hole. At times the quarterback held the ball too long. It’s a combination of things that have to improve.”

With two games remaining, Livingstone is hoping to get out of the division basement. It celebrates homecoming next Saturday when Fayetteville State visits and then hosts one-win Johnson C. Smith in its season finale on Nov. 4. The Golden Bulls defeated Shaw, 13-10, yesterday.

“It comes down to pride now,” Longerbeam said. “We’ve got to find a little fight in us and finish the season strong and healthy.”

NOTES: Hickman’s pick-6 was LC’s second of the year. Linebacker Jarod Richardson had one in a 30-29 loss at St. Augustine’s two weeks ago. … Richardson led the Blue Bears with nine tackles and was credited with 1.5 sacks. Sophomore Ryan Milledge recovered a fourth-quarter fumble. … Duncan finished with three receptions for 55 yards, but LC’s offense struggled. It converted only two of 14 third-down conversion tries. … WSSU linebacker Kyrell Williamson, an A.L. Brown product, had six tackles, including a QB sack for a loss of eight yards. Williamson leads the Rams with 54 tackles this season. … WSSU has now won 15 straight games against Livingstone, which hasn’t won in this series since 1998.