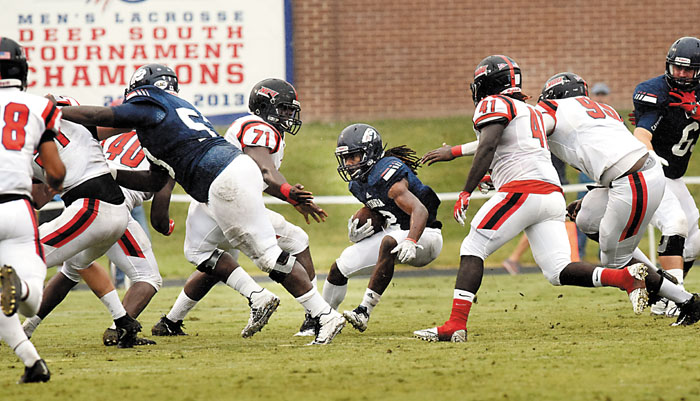 GREENEVILLE, Tenn. — Catawba’s football team was determined that last week’s loss to Wingate, as devastating as it was, wasn’t going to beat the Indians twice.

Catawba bounced back. The Indians did just about everything right at Tusculum on Saturday afternoon and thumped the Pioneers, 40-13. Catawba was favored going into the South Atlantic Conference clash, but not by much. Tusculum (4-4, 2-3) had knocked off preseason favorite Newberry a week earlier and was viewed as a dangerous opponent.

“Our staff did a good job all week and our young men played as well as they have all year,” Catawba head coach Curtis Walker said. “They put Wingate behind them. They played focused. They played the way we want them to play in all three phases of the game. They played selfless, and they played as one.”

“Kenyatta had a great game, not just that long run he had (a 78-yard romp), but on a lot of other carries,” Walker said. “Our offensive line was good, we ran the ball well, and Patrick operated the offense at a high level. Our defense got field position for our offense and our special teams forced turnovers.”

The stat sheet verified it was a complete effort by the Indians. Catawba registered five sacks, one by All-American Kyle Kitchens, and also stoned Tusculum’s rushing attack for a meager 9 yards on 28 carries. Catawba rushed for 244 yards and threw for 218. Catawba’s defense stopped the Pioneers 11 out of 12 times on third-down plays. The one time Tusculum did convert on third down it was by the nose of the football.

The biggest threat posed by Tusculum was quarterback Alex Ogle, a 6-foot-4 junior who was a backup at Division I Boise State before transferring. Ogle, the reigning SAC Offensive Player of the Week, threw for 190 yards.

“They completed a few long passes, but we got good pressure on Ogle and made him move around and our young defensive backs covered well,” Walker said.

Catawba trailed, 6-0, after O’Brien was intercepted, and Ogle fired a 36-yard TD pass to Evan Altizer, a receiver who tormented Catawba at Shuford Stadium last year.

But Catawba would shut down Altizer after that and would score the game’s next 37 points to turn homecoming at Pioneer Field into a train-wreck.

O’Brien hit Mobley for a 33-yard score with 4:14 left in the first quarter, and Brackman’s PAT gave the Indians a 7-6 lead.

“After that, they were double-teaming Mobley, but we got the ball to our other receivers,” Walker said. “Keyon West (7 catches, 77 yards) had a very good day.”

A pair of Brackman field goals boosted Catawba to a 13-6 lead. They were set up by a bad snap on a punt and a forced fumble by Catawba’s Dijonne Williams that Michael Peppers scooped and returned to the Tusculum 12-yard line.

Catawba made it 27-6 before halftime on O’Brien’s 21-yard TD pass to Jourdan Osinskie and a 2-yard scoring run by Smart. Smart’s TD was set up by another turnover. Linebacker Isiah Huffin hit Ogle to knock the ball loose, and lineman Ryan Watts grabbed it. The turnover was recorded as a fumble on the stat sheet, but Walker contends that Ogle was in his throwing motion, and Watts plucked the ball out of the air for an interception. Walker is looking forward to watching the film of that play.

Catawba kept scoring in the third quarter, with Brackman’s third field goal and a 78-yard dash down the sideline by Greene pushing the Indians in front, 37-6.

In the fourth quarter, Ogle tossed his second TD pass and Brackman made his fourth field to close the scoring.

Brackman missed a 44-yard field goal early in the fourth quarter. Had he connected, he would’ve tied the school record of five set by Tom Sexton in 1978 against Carson-Newman.

“Lee kicked field goals whenever we didn’t cash in on opportunities,” Walker said. “But we finished a lot of drives today with touchdowns.”

Next for Catawba is a game at Limestone in Gaffney, S.C.  The Saints (4-4, 3-2) have been a surprise team in their first year in the SAC and beat Newberry on Saturday.