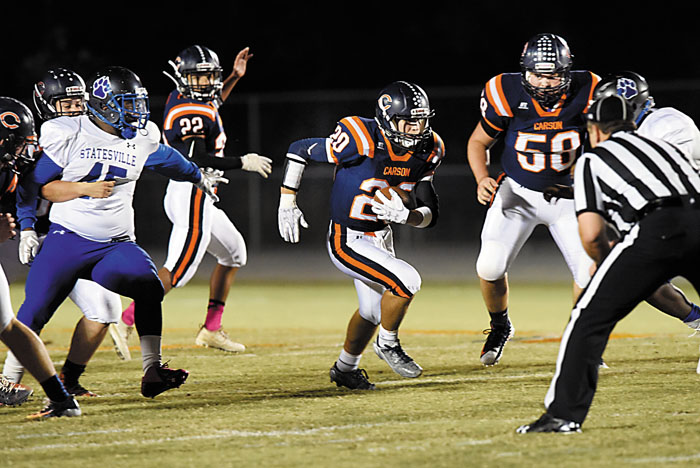 CHINA GROVE—It was Homecoming in more ways than one at Carson High Friday night as the Cougars suffered a stinging last second defeat to Statesville, 34-30.

While the Cougar faithful were welcoming alumni back and crowning a queen, what the team really needed was just one more measly first down to claim a huge North Piedmont Conference win.

But it was also a homecoming for Statesville senior quarterback Bryant Young, a West Rowan native and the son of legendary Falcons’ coach Scott Young. Young channeled his best Aaron Rogers or Tom Brady in the final 1:17, crafting a near-perfect 66-yard drive by hitting five of six passes, including the game-winner to Izaiah Gathings from 13 yards out — with just 19.8 seconds left.

“To be honest, I am a competitor,” said the 6-0, 190-pound Young. “I want the ball in my hands in that situation, driving down the field in the final seconds with the game on the line. That is something you dream about your whole life.”

Trailing 30-28, Statesville took over on downs at the 34-yard line with 1:17 left when a Cole Sifford pass was batted down at the line. Young then completed consecutive passes on the wings to Gathings, Kyjuan Reid and Caylon to reach the Cougar 31 with 47 ticks left.

After an incompletion, Young found Imes on a screen pass that reached the 13, then completed the comeback by hitting Gathings on a post slant in the end zone. A two point conversion run failed but Statesville had enough points to win as Carson could not mount a last-second threat of their own.

“He did such a great job and our offensive line really stepped up and protected him,” said Statesville head coach Randall Gusler of the final drive. “Bryant just did everything we could ask him to do tonight and more.”

On the other side of the field, Carson Coach Joe Pinyan lamented his team’s failed attempt to run out the clock. “The sting of it all is we should have won the game,” Pinyan said. “We just needed one more first down. Statesville played a heck of a game and we just couldn’t pressure him (Young) in the end. But our kids played hard and gave it all they had.”

The frantic finish to the game was indicative of a wild contest featuring some spectacular scoring plays crammed into a short period of time.

The Greyhounds jumped out to a 14-0 lead in the second quarter on runs by by Imes and Joyner. But Carson came to life by unleashing freshman running back Michael Gonsalves in his varsity debut. The 190-pounder crashed in from the 1-yard line with 2:18 left in the half, cutting the margin to 14-7.

That set the stage for a wild final minute of the half. Carson took advantage of a short punt to quickly score thanks to senior wide receiver Jamarius Hairston. The 6-3 Hairston raced 26 yards to the 14-yard line on a pass from Sifford, then the Cougars went to their bag of tricks to run a halfback pass play that looked bad but ended up very good. Slot man Cam Prugh took a hand off and looked to pass back to Sifford. But he was covered so Prugh heaved a prayer into double coverage in the end zone where Hairston snagged a deflection off a defender to tie the score at 14-14 with :25 seconds left.

The thrill of tying the game lasted just a few seconds however as Young took the ball at his own 32 and found his receiver, Reid, streaking down the right sideline. The junior speedster hauled it in and raced untouched for the 68-yard score with 14 seconds left in the half. Young then passed to Gathings for a two-point conversion to give the Greyhounds the 22-14 lead.

Carson came out in the third quarter and pieced together a tying drive, thanks in large part to a roughing the passer call and defensive pass interference against the Greyhounds. Gonsalves finished the drive with a 2-yard dive, then Jerry Cipres ran in the two pointer to tie it at 22-22.

On the ensuing drive, Carson forced the break they needed as Cipres pounced on a Statesville fumble at the 32.

A sack pushed the ball back to the Greyhound 40, but Sifford rolled left and found Hairston behind the defense at the 2-yard line for the go ahead score late in the third quarter. Sifford passed to AJ Jackson for two and upped the margin to 30-22.

Statesville opened the fourth period with a scoring drive as Young hit Gathings from the eight to make it 30-28. But it stayed that way when Carson defender Jailen Williams batted down Young’s pass for two points.

Carson’s bid to secure the win began with just over six minutes left when they held Statesville on downs at the Cougar 41. The drive lasted 10 plays and ran the clock down to 1:17, but the Cougars ran out of downs, setting the stage for Young’s last minute heroics.

“We won’t have any trouble getting up for those last games,” Pinyan stated. “We still have a lot of football to play.”