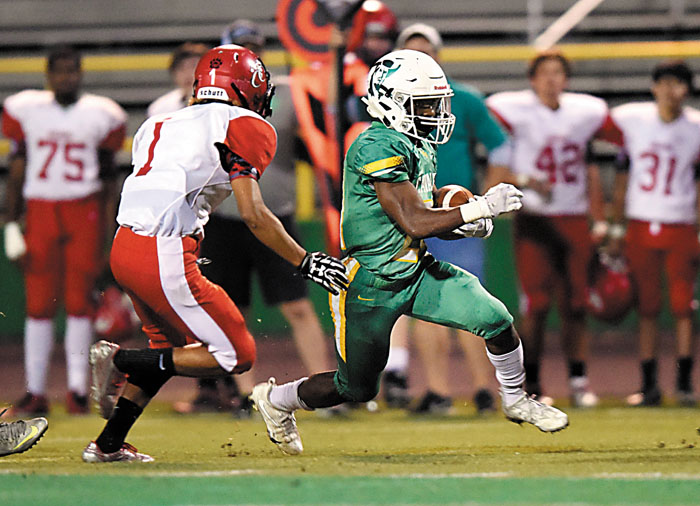 North Rowan's Jaleel Webster leads his team into a showdown with North Stanly tonight . photo by Wayne Hinshaw, for the Salisbury Post

Annually, this is an insane week for fall sports.

The football game of the night in the area, the state and maybe in the world is in New London, where North Rowan will be tackling North Stanly  at 7 p.m. in a 1A Game of the Century. Both are ranked in the AP top 10. Both are 7-1 overall and 4-0 in the Yadkin Valley Conference. Both have lost only to a 3A team.

Looking at comparative YVC scores if you’re a North Rowan fan is scary:

Those three scores lead us to believe that North Stanly should win by roughly 50 tonight, but I doubt that will be the case. I’m not sure where the Cavaliers’ collective heads were at when  they played South Stanly, but I do believe they’ll bring it tonight, because this is a game people have been asking them about for a month.

North Rowan is a big, talented  team for a 1A club and senior back Jaleel Webster (1,000 rushing yards) may be the county’s best offensive player. The only thing that stops North Rowan is North Rowan, and that’s with turnovers and/or penalties. North Rowan should score three or four touchdowns.

Whether that will be enough to win will depend on North Rowan’s 4-2-5 defense, which is usually imposing. The challenge tonight will come from a special running back and his offensive line. North Stanly junior Cameron Davis has put up a long string of numbers that look like misprints — 125 carries, 1,773 rushing yards, 25 TDs. Davis got 322 rushing yards in the Comets’ showdown with West Montgomery. He got 403 rushing yards, seriously … 403, against West Stanly.

The only team that stopped Davis this season was Northwest Cabarrus. He had a very human stat line against the Trojans — 14 carries, 52 yards, zero TDs. Not coincidentally, that was the game North Stanly lost.

North Stanly has thrown for only 686 yards, but the Comets put it in the air with some success against Northwest and against Albemarle. Not many teams have been able to make the Comets throw. North Rowan will certainly try.

North Stanly and North Rowan are only 26 miles apart, but the two Norths haven’t stared each other down since 2000. Whatever happens, it should be fun for fans. The Post’s Dave Shaw will be in attendance.

At Davie, despite missing the first five games this season, Cooper Wall broke the school receiving yards record for a career (2,642)  on Friday. He has 30 TD catches, one short of tying the school mark. If you’re wondering how that compares with Rowan County records, East’s Seth Wyrick had 2,948 receiving yards and East’s Johnny Yarbrough had 43 TD catches.

The picks were 5-2 last week, a shaky effort. I lacked faith in South Rowan, but the Raiders pulled one out against Thomasville. I had all kinds of faith in Salisbury, based on comparative scores against Lexington and Thomasville, but the Hornets fell flat in a showdown at Ledford.

Streaks: East has dropped five in a row, hasn’t won since Sept. 4. Vikings have won their last two.

The series: Cavaliers lead 14-5. Most recent North Stanly win was in 1998 when the Comets hung 50 on the Cavaliers

The series: Yellow Jackets lead 9-1. Four of those meetings were in the postseason. South’s lone win was in a 1977 playoff game.

The series: Even though the schools are 29 miles apart — Glenn is in Kernersville — they’ve never squared off in football.

Streaks: Glenn, obviously, has won eight in a row.

The series: Wonders lead 39-3-1. Northwest’s last win was in 1976 when people still were watching the antics of Archie Bunker, Mary Tyler Moore and M*A*S*H.

Home/road: Wonders seem to be on the road every Friday, and they’re 5-0 in away games; NWC is 2-2 at home