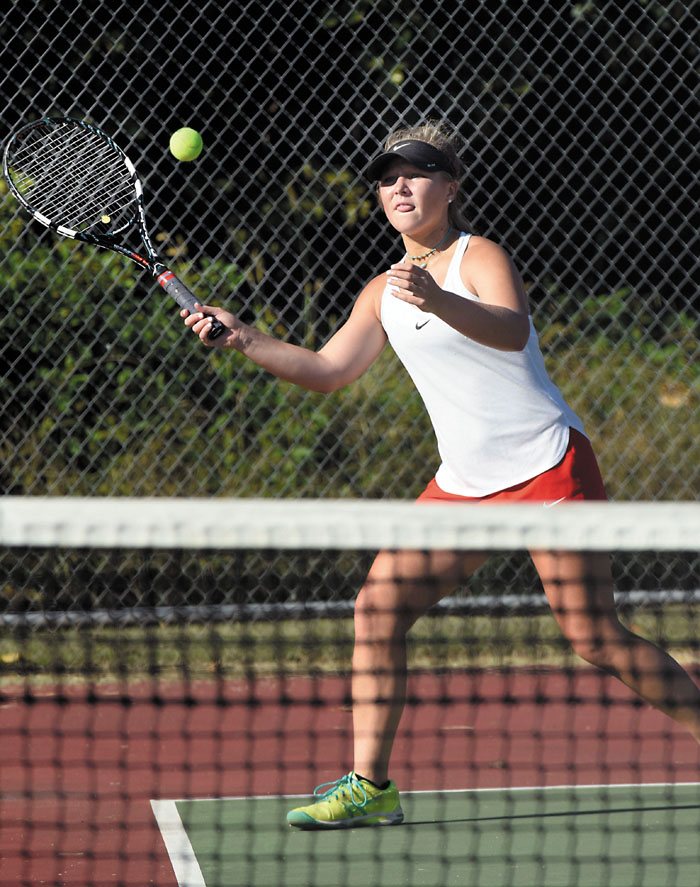 SALISBURY — The regular-season is done, but quite obviously, the Salisbury girls tennis team is not.

Despite a difficult first-round draw, the Hornets opened the 2A team state playoffs Wednesday with a 5-1 victory over Jordan-Matthews, a No. 1 seed out of the PAC-7 Conference.

“It may have looked like it was easy, but it wasn’t,” winning coach Milton Griffith said, after Salisbury (20-1) captured its 15th straight decision and advanced to next Tuesday’s second-round match against the winner of East Montgomery-Forbush. “This was very tough. We haven’t been challenged much this year, other than Concord, so this was like a wake-up call for us.”

“We’ve got regionals on Friday just like they do, so we wanted to play,” she said after the Jets finished 15-2 in duals. “I hate that this was a first-round match. Nineteen-and-one against 15-and-1 is a match you’d expect in the third round. But at this point in the season, you’ve got to be ready for anything.”

Salisbury was. It lost only at third singles, where Emma Nianouris fell to Emery Moore, 6-2, 6-0. And both Julia Honeycutt at No. 2 singles and Bethanie Stauffer at No. 5 were extended before earning exhausting victories.

“I felt like I should have been playing better and got a little frustrated,” Stauffer said after prevailing 6-4, 7-5 against J-M’s Avery Headen. “I got to the point where I needed to stop thinking about the shots I was missing and start thinking about the ones I was making. I decided not to take high-risk shots. I just kept it in play waited for her to make mistakes.”

“It was my hardest match of the season,” the senior said. “(Mitchell) was very consistent. She forced me to be patient, to play a waiting game. I tried to make her run, tried to tire her out. In the end, it was my own consistency that helped win the match.”

First off the court for Salisbury was senior Maria Capito. The southpaw earned a breezy, 6-1, 6-0 victory against Marshall Phillips at first singles.

“Going into the match I was a little nervous, not knowing what to expect,” she said after improving to 20-1. “I had to keep my head up the whole time. It was definitely one of my tougher matches. She was also left-handed, and I’m not used to facing lefties. It was like hitting back at myself.”

Capito used a time-tested strategy to gain an upper hand. “I was always playing one shot ahead in my mind,” she explained. “Once I got a feel for her, I started planning where I wanted the next shot to go. It’s not always about hitting it hard. You’ve got to be thinking out there.”

“She was a good player who could move the ball from side to side,” Rusher said. “I just had to play smart and find her weaknesses. The best thing I did was control the tempo. I hit some lobs but then changed to fastballs. I mixed it up.”

Burton said she persevered more than anything. “I tried to beat (Rogers) at the long game and do it consistently,” she said. “But she was just as consistent. She could place shots in the corners a lot. That kept me on my feet, moving all the time.”

Afterward, Griffith seemed relieved that SHS had a sidestepped a potential first-round disaster.

“A lot of times, when you don’t play against a lot of good competition, you don’t know how to step up when the time comes,” he said. “You’re not always ready for it. But the girls responded and did better than expected.”

NOTES: All six of Salisbury’s singles players qualified for the 2A Midwest Regional individual tournament scheduled Friday and Saturday at SHS, Catawba and City Park. At stake are berths in the state tournament Oct. 27-28 in Cary. … Jordan-Matthews reached the state semifinals last season.