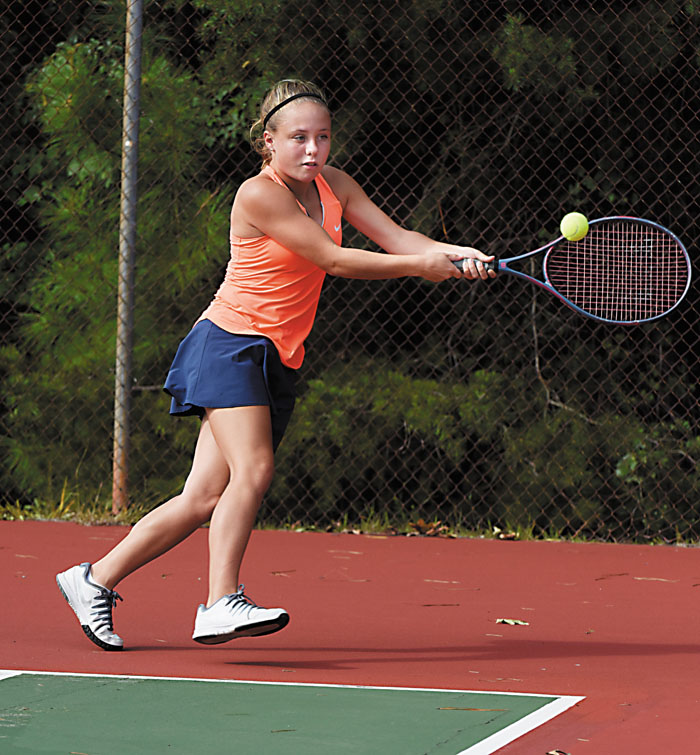 CHINA GROVE — Carson isn’t a school known for awesome girls tennis, but the Cougars played like a traditional power on Wednesday.

Carson, participating in the 3A dual team state playoffs for the seventh time in its 12-year history, claimed its third playoff victory. The Cougars took care of Eastern Guilford, 6-0, in a first-round matchup. Carson had the five victories needed to advance after about 45 minutes.

The only match of any length was a struggle at No. 2, where Carson senior Gabi Jolly had to scrap with Eastern Guilford junior Jenna Dudley. Jolly took the first set, dropped the second one, but then won a tiebreaker with everyone watching, 10-8.

“I hate being the last one on the court,” Jolly said with a smile. “I guess I need to speed things up.”

Jolly also isn’t a big fan of drop shots. Dudley had a deceptive one.

“She hit good drop shots, and she was very fast,” Jolly said. “She got to just about everything.”

No one connected with the Carson program expected it to be as easy as it was. The visitors from Gibsonville (13-4) had a fine season going and all their singles players had winning records.

Then there was the fact that Siera Fesperman, a senior who has been outstanding as Carson’s No. 3, was sidelined by a shoulder injury. That put more pressure on the top girls to win, while  the 3 through 5 players, Jadyn Kirkpatrick, Maci Cooper and Quinnlan Watson, all had to slide up a seed. Lindsey Conrad, a freshman who is normally No. 7 for the Cougars, moved into the No. 6 spot.

Still the Cougars rolled. Conrad, who was part of a critical doubles win against South Iredell, breezed 6-0, 6-1 in her first big singles match.

“Lindsey did very well, and it definitely was not as tough a match as we anticipated,” Carson coach Kayela Galloway said. “We expected a very difficult match, based on their record, and we prepared in practice to play the hardest match we’d played all year. Our girls came out strong today. They were aggressive. They played with confidence.”

Carson won a confidence-boosting 5-4 match with South Iredell last week that decided the North Piedmont Conference’s No. 1 seed. Winning that match enabled Carson to play on its home courts in the first round, and everyone came through.

“My opponent today hit a lot more lobs than I’m used to, but even though I’d moved up a seed, it still was a pretty routine match,” said Kirkpatrick, a freshman who has a 10-4 record at No. 4 this season.

Carson senior Emily Sloop breezed through her first set at No. 1 singles and wound up winning 6-0, 6-3.

“We didn’t know any of those girls and we didn’t have any idea how good they were or how good their conference might be,” Sloop said. “We just tried to play our best. In my match, I got off to a great start, but then I didn’t play as well in the second set.”

Sloop did well enough to boost her season record at No. 1 singles to 11-3. Her tennis career is winding down, as she has no plans to play in college. She hopes to attend UNC Wilmington or Campbell, just as a student.

Cooper, who was undefeated at No. 5 this year, also didn’t have any trouble moving up a seed and turned in a 6-1, 6-0 victory.

“We all expected a long day, but it turned out to be a quick match,” said Cooper, an all-around athlete who will be on the basketball court for the Cougars in about a month. “We just went out there and played our game.”

No doubles were required, and the Cougars headed for an earlier than expected supper.

The Cougars (13-2) will be underdogs in their next match against Concord (17-2). That match likely will be played next Tuesday at Concord.

The 3A Midwest Regional individual tournament will be on Friday and Saturday at Concord’s Myers Park.