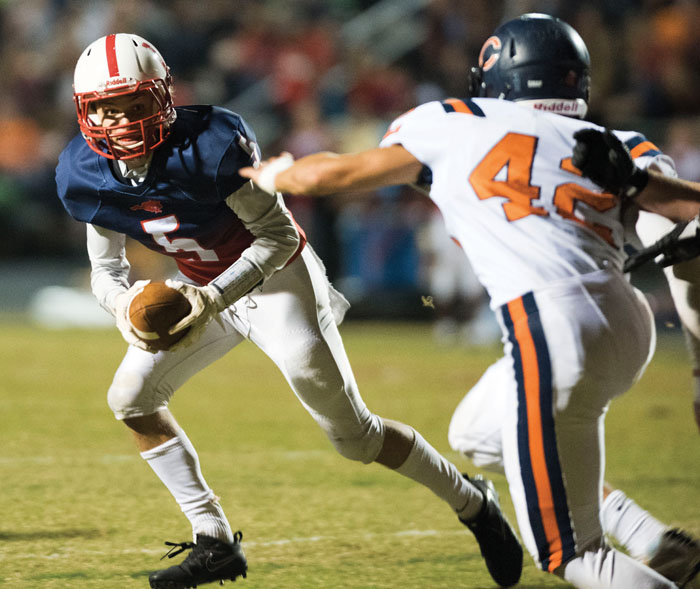 CHINA GROVE — East Rowan-Carson is such a fierce football rivalry that players do extraordinary things.

Last Friday night, Carson sophomore halfback Hunter Courtney broke his leg when he was hit on the 6-yard line, but he still put the ball in the end zone on what is expected to be his last play of the season.

Courtney’s injury and the dislocated kneecap suffered by linebacker Zain Tucker put a depth-shy Carson team in dire straits on the road at East, but the Cougars pulled out a 37-34  North Piedmont Conference victory.

“As thin as we are, one thing our kids have learned is that at any moment they might have to move to a different position,” Carson head coach Joe Pinyan said. “We lost two key players. Zain goes down and then we’re moving a spur to linebacker and moving a corner to spur. Hunter goes down and we lose a lot of the speed that we have. For a while, things were just going haywire on us. But I liked the way this team responded when so many things were going against them.”

East led 15-7 and 23-15, but Carson got even in the final minute before halftime. The Cougars (3-5, 2-0 North Piedmont Conference) finally got a lead in the third quarter and held on in the fourth.

The guy who turned in  the electrifying effort for Carson was junior Jacob Taylor, a rangy linebacker at 6-foot-2, 170 pounds. With Tucker out, he had to get physical as a run-stopper — and he did. His stat line for defense and special teams was staggering — 15 solo tackles, four assisted tackles, five tackles for loss, a forced fumble and a sack.

“That sack was just huge,” Pinyan said. “It slowed East down when we needed to slow them down. Taylor is a wild card for us, a guy who can play a lot of positions.”

Taylor is a guy everyone doesn’t know about yet, but it’s probably only a matter of time. He’s got everything he needs — except pounds— and he’s working on that. The roster says he’s 180, but, that’s just wishful thinking.  Maybe after Thanksgiving dinner.

“The East game was my biggest game as far as stats, but my best game may have been the Central Cabarrus game we lost in overtime,” Taylor said. “When people ask me what position I play and I tell them I’m a linebacker, they never believe it. I’m tall and lanky. I  know I look more like a receiver or maybe a safety, but I really love playing linebacker. I always try to hit like a linebacker is supposed to hit.”

Taylor’s reaction when Tucker and Courtney went down on Friday?

“Oh, crap, and then it was, oh, crap, again.” Taylor said. “We need those guys, but we kept going. There was a lot of trash-talking going on out there on Friday, so there was always that little extra push that we needed.”

His favorite play? Definitely the sack.

“I blitzed, saw the quarterback dropping back and going into his throwing motion, and I just blew that play up,” Taylor said. “I didn’t want to lose to East.”

Carson won its fifth straight against the Mustangs.

Pinyan chuckled at the irony of recommending a defensive player as the hero of a 37-34 decision, but East-Carson games are rarely run-of-the-mill affairs.

“East really got after us, they played very hard, and they’ve got a couple of kids that can get gone in a hurry,” Pinyan said. “But we threw it well, we ran the option well, and we did a lot of good things that set up the trick plays everyone is talking about. Then, when we had to stop them, our defense stopped them.”

Carson started off the season, 1-5. After the Cougars were thoroughly demolished by Salisbury, A.L. Brown, North Rowan and Davie County in a brutal four-game stretch in which they were outscored,  171-25, no one would’ve blamed fans for wearing paper sacks over their heads or Pinyan for waving a white flag.

But the Cougars kept working. Then things started turning around with a surprising effort in the overtime loss to Central Cabarrus.

After a bye week came two hard-fought wins in the NPC.

Carson will still be an underdog in all three of its remaining league games, but no one doubts the Cougars are going to show up and take their best shot.

“Yes, we got run over by teams like A.L. Brown and Davie, but those games helped us,” Taylor said. “They made us a lot tougher.”

Basketball star Jamarius Hairston is having a productive senior football season and caught his fifth TD pass against East. He was named Carson’s player of the week for offense. … Kicker/DB Juan Espinoza and long snapper Andrew Bradshaw were honored for their special teams play against East.