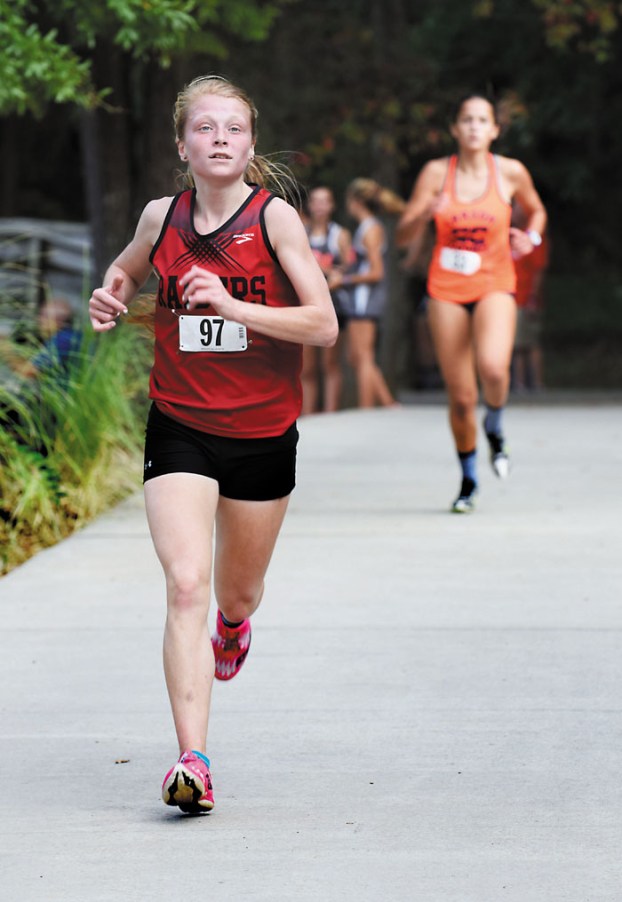 Wayne Hinshaw file/for the Salisbury Post ... South Rowan’s Madison Lowery, shown during the Rowan County Championships on Sept. 28, also won the Central Carolina Conference individual title, Tuesday at Salisbury Community Park. She had a time of 20:20 in the 5K. SALISBURY — They should rename a street near South Rowan — Madison Avenue.

“There’s got to be a few more Madisons out there somewhere, and we’re going to try to get them on our team,” joked South coach Robert Marchinko. “But I was really happy with our whole squad today. Our girls ran well. I thought we did everything we could possibly do to win a conference championship. It didn’t work out for us, but we did all we could do.”
While South’s score of 73 wasn’t good enough to win, it was good enough for second place. North Davidson, paced by third-place finisher Kassidy Everhart (21:05) took top honors with a 57. Sydney Beck (6th) and Emma Berrier (11th) helped boost the deep Black Knights.

Lowery, who won the Rowan County Championships at Dan Nicholas Park, added the Central Carolina Conference title to her growing list of accomplishments on Tuesday at Salisbury Community Park. The unassuming, strawberry-maned Lowery was thrilled to win and showed it with a smile that lit up the park, but she wasn’t elated with her time of 20:20. Her personal record is 20:01.

She’s won four or five races this fall. She isn’t sure which is right. She’s been winning so much, she’s lost count.

“I just didn’t get out as fast as I wanted to today, and then my second mile wasn’t very good,” Lowery said. “But I stayed confident that I was going to win. Not cocky, just confident.”
Lowery’s closest pursuer was teammate Henry, an athletic sophomore who scored 29 goals for South’s soccer team last spring.

“I started off very strong, but then I started getting worried because Madison (Lowery) was just leaving me,” Henry said. “But I picked it up.”

Salisbury was the defending champion, but the Hornets settled for third place in the team scoring behind two newcomers to the league.

Salisbury sophomore Leah Cressler,  the league’s top runner a year, ago finished in fourth place. She competed with a bum ankle (she stepped on a root in a recent meet and turned it), but still managed a 21:27 clocking.

“This league has a lot more teams and a lot more runners now, so it’s definitely gotten tougher,” Cressler said. “But I was happy. I ran my best time of the season.”

Ledford (121) was sixth and got an all-conference effort from Sheccid Ontiveros (5th).

By Mike London mike.london@salisburypost.com LANDIS — Excitement is starting to return to the football field at South Rowan. In the gym?... read more