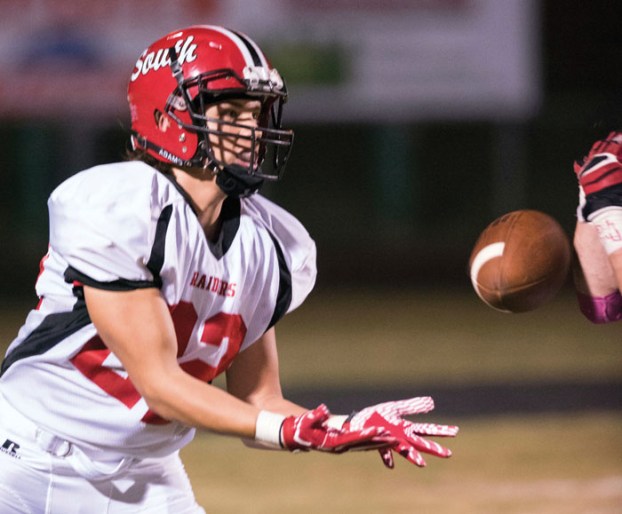 LANDIS — In the fall of  2009, South Rowan’s explosive football team mauled Statesville, 76-22, setting all sorts of records, and the Raiders followed that up with a thrilling 27-20 road win against a good, Brian Hinson-coached East Rowan team to finish the regular season, 9-2, and earn a home game in the state playoffs.

That was the last time South won two games in a row before last Friday night. Exciting 2A Central Carolina Conference victories against West Davidson and Thomasville have given the Raiders a mini-winning streak and reasons to be optimistic about what’s coming next.

Starting with a first-round playoff loss to R-S Central in 2009, South endured a 10-72 stretch, and that’s counting a forfeit victory. But things finally are looking up. The Raiders made big plays —  extraordinary plays, really — on Friday, with the most memorable coming from junior safety Christian Reynolds. Officially, he went 100 yards with a pick-six, but he ran more than 100 yards. It was a two-touchdown swing. South won, 29-25, so that play was pivotal.

Reynolds (5-8, 165) spent some early years in Asheville, but he’s lived in Rowan for a while. He made some strides in football when he attended China Grove Middle School.

He played on the South jayvee team the last two years before moving up to the varsity.

“He’d played some quarterback, but we were thinking about him probably being a slot receiver coming into this season,” South head coach Daniel Yow said. “But you’re always looking for DBs. We put him back there, and we liked what we were seeing. He’s one of those guys who has a knack for it. He doesn’t always have big stats, but he’s always around the ball.”

The first evidence Reynolds being around the ball came when South lost to East Rowan, 41-8, early in the season. South played poorly, but Reynolds made 12 tackles and fought to the last whistle.

Reynolds’ first interception came in the win at West Davidson. Thomasville was next.

Playing at home, South led late in the first half, 15-12, but Thomasville was pushing toward a go-ahead score. Then quarterback Curtis Gilyard dropped back to pass, and Reynolds was dropping back as well.

“I’m dropping and I’m reading the quarterback’s eyes,” Reynolds said. “Then I see the ball in the air, and it was like, ‘Oh, my gosh, there it is.'”

When Reynolds snagged the ball, he was well into the end zone. Yow expected him to take a knee for the touchback to bring the ball out to the 20. That was Reynolds’ first impulse, as well, but then he saw physical linebacker Michael Sloop looming in front of him.

“I saw Sloop, and I knew he’d be blocking for me,”  Reynolds said. “I just followed him. Then we’re heading up the far sideline, the Thomasville sideline, and it gets crazy.”

Yow’s emotions went from euphoria over the pick to disbelief. What the heck was Reynolds doing?

“Christian is quite a few yards deep (in the end zone) because it took him three steps just to get to back the goal line,” Yow said.  “I was not expecting him to do what he did and I’m really wanting him to get down, but the next thing you know he’s off to the races.”

Whenever the defense suddenly gets its hands on the ball, there’s a pretty good chance for a touchdown, and every team prepares for that opportunity. A lot of offensive players aren’t used to tackling people, and that helps. It’s also a good idea to focus on blocking the guys with low numbers on their uniforms. A defensive back like Reynolds is going to be able to out-run the guys with jersey numbers in the 50s, 60s and 70s.

One Bulldog got close to Reynolds from behind, but cornerback Scott Stephens took him out.

“Thomasville has some fast guys, but everyone was blocking.” Reynolds said. “Jarrid Nelson, Patrick Long — a lot of guys got blocks. My teammates had  made a box around me, and I just kept going. I made one cutback near midfield to use a block, and then it was right back to the sideline.”

The biggest obstacle to scoring on a play like that is often a yellow flag. Guys get excited, they hold, or they block someone in the back, who probably didn’t need to be blocked.

“We had a lot of blocks, and they were all perfectly legal,” Yow said. “A ref actually came over to me and complimented us that were disciplined enough to not have a penalty on a play like that. Christian is going into the record books with a 100-yard interception return beside his name, but everyone who was on the field had a hand in it. Hats off to all those guys. It’s a play they can tell their kids and grand-kids about.”

Reynolds finished his dash, exhausted, but thrilled, with the biggest play of his life. South led at halftime, 22-12.

South would fall behind 25-22 before it was over, but it finally beat the Bulldogs, 29-25, when big-play guy Kory Sellers broke loose on an 85-yard punt return.

The game also included a terrific, 20-play drive by the Raiders in the first half on which workhorse Demarcus Blackwell carried the ball 14 times. Patrick Brooks pancaked several Bulldogs on that march.

Reynolds produced another large play in Friday’s victory, nothing historic, but he did cause a fumble.

“They ran a counter backside, and I hit the guy (219-pound fullback Zaion Kerns) just right and jarred the ball loose,” Reynolds said. ” Brooks jumped on it, and that fumble helped us. Our offense scored after that. This was the best team game we’ve played all season.”

For South, it was good to win at home, and it was really nice to win two in a row.  South’s seniors were 9-year-olds the last time that happened.

“We made plays,” Yow said. “I’ll remember Christian’s runback and Kory’s punt return, but the biggest thing was we got down in the third quarter and still fought back. We just kept fighting back.”