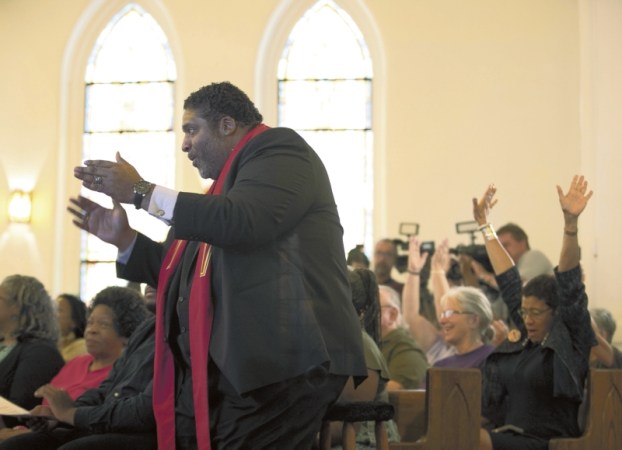 North Carolina NAACP president Rev. William J. Barber II reacts to an announcement Monday, May 15, 2017, by attorney Caitlin Swain, that the US Supreme Court declined to consider reinstating North Carolina's 2013 elections law that included voter ID and other restrictions on voting during a gathering at Davie Street Presbyterian Church in Raleigh, N.C., where Barber announced he is stepping down as NAACP president. (Robert Willett /The News & Observer via AP)

D.G. Martin: Moral Monday about to spread to rest of country Is the Rev. William Barber, leader of North Carolina’s Moral Monday protests, going to take the movement to the rest of the country?

Beginning in 2013, the Goldsboro minister has led demonstrations at the state’s legislative building and in other state offices and properties. The groups he led often used civil disobedience to protest against actions that he said resulted in unfair treatment, discrimination, voting suppression, damage to the environment, unfair taxes, and cuts to public education.

Next year, as he explained in a lecture at the University of North Carolina at Chapel Hill last week, he plans a series of Moral Monday-type protests and civil disobedience that will occur in public buildings and facilities across the country.

Barber’s Chapel Hill speech was this year’s Weil Lecture on American Citizenship, part of a series that began in 1915 when former President William Howard Taft gave the first lecture. The prominent Goldsboro Weil family founded the series and continues to support it and other public causes. Gertrude Weil (1879-1971) is the subject of a biography, “Gertrude Weil: Jewish Progressive in the New South,” written by Leonard Rogoff and published this year by UNC Press.

In his stirring speech, Barber shared his plans for 40 days of protests, beginning on Mothers’ Day next year and continuing until the beginning of summer. The name of the organizing entity is “The Poor People’s Campaign: A National Call for Moral Revival.”

According to the campaign’s web site, “By engaging in highly publicized civil disobedience and direct action over a six-week period in at least 25 states and the District of Columbia during the spring of 2018, the campaign will force a serious national examination of the enmeshed evils of systemic racism, poverty, militarism and environmental devastation during a key election year while strengthening and connecting informed and committed grassroots leadership in every state, increasing their power to continue this fight long after June 2018.”

As Barber concluded his speech, he itemized wrongs against poor people that the campaign will address. After each wrong, the mainly white audience shouted back, “And we won’t be silent any more.”

It was a call and response that is standard in many black churches, but not in many white ones. How did these white people know what to do? At the beginning of the program, musical assistant Yara Allen came on stage. She trained the audience in call and response, and had them practice before Barber began his lecture.

I have always wondered about Barber’s lumbering style of walking. He explained. When he was 30 years old, a medical condition almost paralyzed him. Afterwards, he was confined to a wheelchair for 12 years, and then only gradually learned to walk again.

“But I am a fighter,” he said, as he promised to keep getting better and better.

People ask if Barber is trying to be the new Martin Luther King. Barber only acknowledges that the new campaign is inspired by King, but it is not the same thing.

Barber views the upcoming season of protest as part of a third Reconstruction. The first Reconstruction came after the Civil War and ended with the establishment of Jim Crow white control. The second Reconstruction came as a result of the Civil Rights movement of the 1950s and 60s led by King and others. It has been brought to an end, Barber says, by the current times of backlash and retrenchment.

Barber hopes next year’s campaign will bring about a third Reconstruction, with its leaders inspired by King, but using modern tactics and strategies that were not available in King’s time.

Barber may not be another Martin Luther King, but if the new Poor People’s Campaign mounts a successful 40-day effort next year, he will become North Carolina’s best-known national figure.

Ferrel Guillory: NC is hurting itself with squabbles over education governance

No doubt, students will arrive at school this morning, and teachers will engage with them until the dismissal bell without... read more