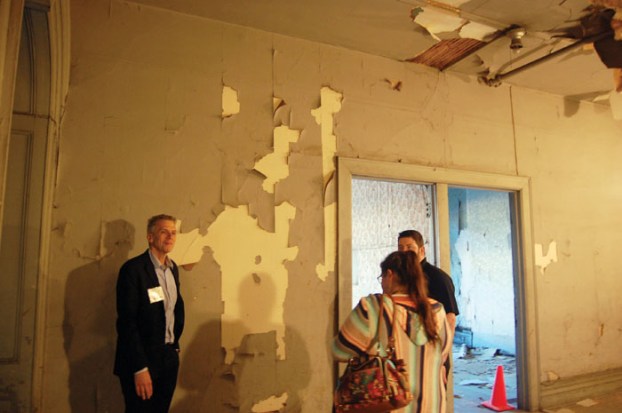 Black Point Investments partner Britt Weaver waits for his tour group to join him on the second floor of the Empire building.Jessica Coates/Salisbury Post

Preservation specialist: ‘This is not about the Empire Hotel. This is about Salisbury.’

“No. 1, it’s got to make financial sense. Otherwise we wouldn’t be in business. No. 2, we have to (have) a very flexible contract. These things don’t ever go the way they’re supposed to,” Hughes said.

The third, he said, is the most important.

“We have to be in a city that wants us,” Hughes said. “We really want to be building in a community that has that positive energy, positive feel to it. And that’s why we’re here.”

Hughes and his partner, Britt Weaver, spoke Monday night during an open house for the Empire Hotel restoration project, hosted by the city of Salisbury.

Mayor Karen Alexander introduced the two partners of Black Point Investments and said the city “couldn’t be happier” to have them running the project.

“We believe that Salisbury deserves the absolutely best quality of developer and plans,” Alexander said. “These were the successful developers, and they are very experienced in this type of work.”

Weaver has organized financing for a number of historic renovation projects.

Jim Prosser, executive director of the Centralina Council of Governments, said the people who attended the open house have an “extremely important” role in the process.

Feedback sheets were handed out to everyone. They asked people what questions and concerns they have about restoring the Empire.

“This City Council is very demanding on us and what they said is, ‘We want to make an informed decision based on information, including all of the potential advantages and disadvantages,’” Prosser said.

Prosser said the advantages of the restoration might be even more than people realize.

“While this downtown project is important and the Empire Hotel is a treasure to your community, this is not about the Empire Hotel. This is about Salisbury,” Prosser said. “This is about making sure that Salisbury continues to be able to grow jobs and grow the economy and provide a quality of life as well as controlling costs to government. They need to do all of those things. This is a means to that end.”

Prosser said he continues to see, across the country, that communities that invest in their downtowns attract more businesses to the area.

Weaver said the next step for Black Point Investments is to meet with the U.S. Department of Housing and Urban Development, which Weaver said will happen Thursday.

Weaver said HUD “basically guarantees loans to banks” that might otherwise be wary of investing in such a project.

“And a bank doesn’t take you to HUD until they feel like (there’s) a very good certainty of getting the job done,” Weaver said.

Weaver said a market study that measured how well Salisbury’s residential market would respond to the addition of downtown housing units “came in very favorably.”

Both Hughes and Weaver have said that historic renovation projects are difficult to finance, which makes it hard for them to know when they’ll be able to start construction on the project.

When the renovated Empire Hotel is complete, it will have 62 residential apartments — mostly one-bedroom units — and 29,000 square feet of commercial space.

Tour groups left City Hall every 15 minutes, beginning at 5:45 p.m., to walk through the first two floors of the Empire building.

Editor’s note: The is the sixth in a series of articles taking a closer look at Salisbury City Council candidates. SALISBURY —... read more