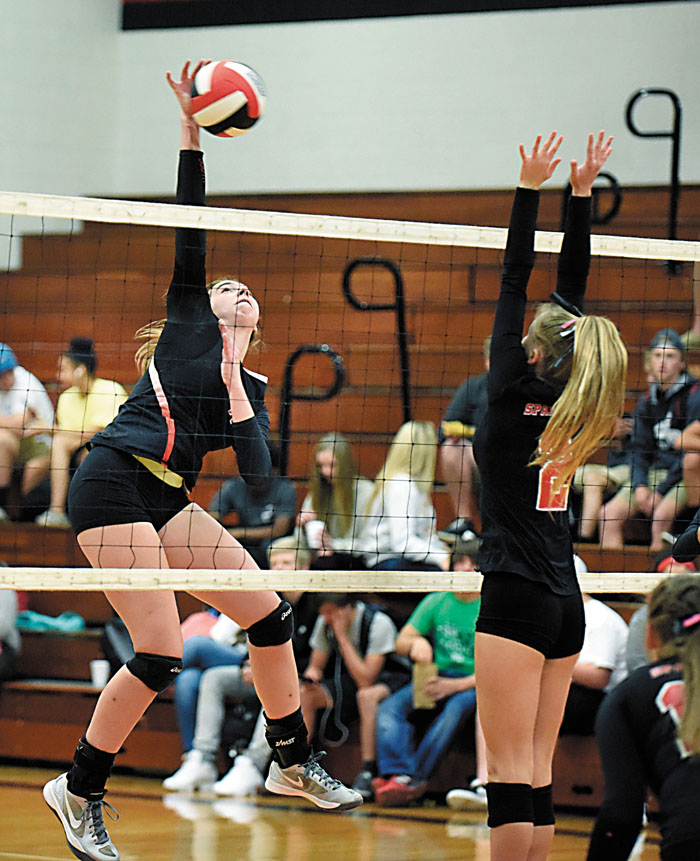 LANDIS — Excitement is starting to return to the football field at South Rowan.

Win No. 18 came on Monday, with third-seeded South easily handling sixth-seeded Central Davidson 25-12, 25-16 and 25-10 in the opening round of the 2A Central Carolina Conference Tournament.

“This new conference has been really good for us, good for our confidence,” South senior libero Jenna Strickland said. “The last few years, we’re taking on teams like Cox Mill, Carson, Hickory Ridge, and you know it’s going to be hard. Now we’re in a league that has very good teams (notably Ledford and West Davidson), but we believe we can beat anyone.”

South coach Jenna Horne has things in perspective. She understands this is not a great team — South was swept by Carson and West Rowan early in the season — but the Raiders are good, the third-best team in the county.

“Our league this year is not as good as the one we were in last year,” Horne said. “Still, it feels great to win. And when our girls are playing with spirit and having fun, we are a very good team.”

Sophomore Kira Rymer is South’s best all-around player, an automatic kill when the Raiders can set it for her. Rymer is one of South’s leaders in every statistical category except assists.

“Kira was our setter last year, but I told her this year we really needed her to hit,” Horne said. “Our kills are coming from the middle, from Kira and Janiya (Downs). Every team knows that’s where we’re going, but those two are still very hard to stop.”

The long, springy Downs, one of the best basketball players in school history, is a junior. She has 351 kills for the season after getting 14 more against Central Davidson’s Spartans. Rymer had 15 kills in Monday’s match and has 318 for the season.

“They’re go-to girls, for sure, and we’re going to them every chance we get,” Strickland said. “If we can get it to them, it’s going down.”

It went down a lot in Monday’s first set, with Rimer and Downs pounding six kills each. Michaela Hallman, a sophomore, does a good job setting for them. She had 24 assists on Monday and has 550 for the season. She averages almost 7 assists per set.

South started slowly and led only 8-7, but after Horne took a timeout for some motivating words, the Raiders immediately got a kill from Rymer. South quickly pushed out to a 16-8 lead and cruised from there.

South trailed 5-2 in the second set before Horne took an early timeout. Central hung in for a while, and it was 12-12, but then South got on a roll. Anna Blume had two saves, while Strickland made several nice digs. Rymer smashed a vicious 25th point that nearly pancaked an unfortunate defender.

“Coach wants us to come out and jump on everyone and she gets on us a little bit when we don’t,” Downs said. “You never know with us. We have our good days and we have our bad days, but we were mostly good today.”

In the third set, Hallman was on target, and Rymer and Downs combined for nine kills. Rymer also had two aces. South led all the way, romping 4-0, building to 11-3 and expanding to 18-6.

“Our defense was on,” said Strickland, who had 13 digs. “And when that happens, we’re pretty good.”

South plays second-seeded West Davidson today in a semifinal on West Davidson’s floor at about 7 p.m. That game will be the nightcap of a doubleheader, following the Ledford-North Davidson matchup.

South split the season series with the Green Dragons. West Davidson won the first meeting, but South took the rematch.

“Our weakest point is usually serve-receive, and West Davidson serves very well,” Horne said. “So it’s a challenging matchup. But we’ve beaten them once, and that was in three straight games.”