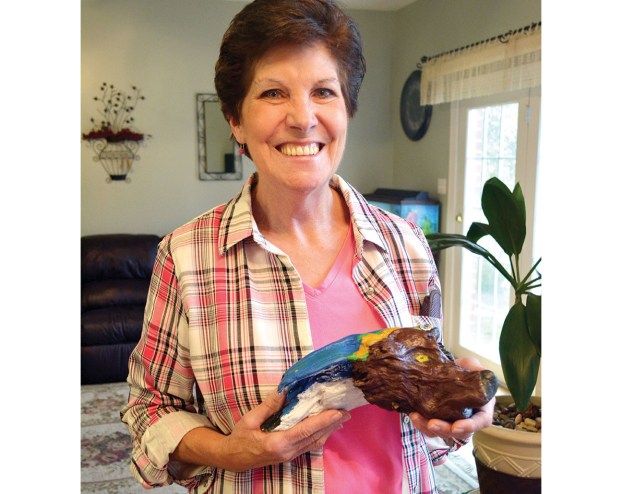 Diane Jones has been creating driftwood art for two years. For the first time, she’s selling her art to help her son’s friend with his cancer treatments. Photo by Susan Shinn Turner, for the Salisbury Post.

Bird in the house This swan is among 80 or so pieces of driftwood art in Diane Jones’ collection.

In the summer of 2015, Tom and Diane Jones’ son moved to High Rock Lake. Diane decided she’d go down and look for driftwood. The first piece she picked up, she decided, looked like a giraffe.

But she went home and painted it, and sure enough, Tom says, it was a giraffe. She kept collecting, and kept painting.

“My husband and I take four bags with us,” she says. “You gotta sift through a lot of sticks to get to it.”

Tom helps her clean the driftwood, and helps her mount it on a second — or third — piece when needed.

“There’s no carving,” he points out. “Nature did all of it.”

Diane has amassed a collection of about 80 pieces of artwork, and has never sold it — until now.

Eric Jones had roomed with Derek Maner at the lake. Three years ago, Derek — who graduated with Eric in 2008 from East Rowan High School — was diagnosed with stage 4 colon cancer. He was expected to live only two years but continues treatment at Duke Cancer Center, and hopes to be chosen for a clinical trial early next year. He and his wife, Carrie, now live in Cary.

All the while, Diane was painting, with no plans to sell her art.

“I just wasn’t ready,” she says. “I didn’t know what I was waiting on until that day.”

That day was the day Derek turned 27. He’d had to sell his truck, and Diane decided she wanted to do something to make his life better.

“I pretty much get to see everybody who comes in,” she says. “I enjoy it.”

Diane spends time in her workshop painting just about every day, she says. She and Tom built their Bringle Ferry Road home 21 years ago. The workshop was the site of her beauty shop. Diane has worked at Blue Bay for the past four years. If Tom wants to find her, she’s usually in the workshop, he says. They also have an adult daughter, Tom has two grown daughters, and they have five grandchildren.

When looking for driftwood, Diane likes to find pieces with holes, knots, or curves. Then, she says, whatever animal she’s going to paint “kinda jumps out at me.”

Sometimes, she says, she studies a piece for a long time before she decides what it is. She keeps extra driftwood in a side garden for inspiration. Her favorite piece, she says, is the piece she’s working on.

All her pieces are one-of-a-kind, she says. Someone can’t say, “Well, Diane, paint me a tiger,” she says. This piece of driftwood became an owl.

Unless, of course, she finds a tiger.

Her collection affirms her idea. Here’s an octopus with a shark. Here’s an alligator. Here’s a porpoise. Here’s a swan. Diane once found a long, curved piece of driftwood. It turned out to be a graceful, friendly looking eel. Another time, she picked up a small piece that seemed to have an ear on it.

Sure enough, she painted a white poodle and added a jaunty blue collar. That will thrill one of her neighbors, who raises poodles.

“I’ve piddled with drawings all my life,” Diane says, “but I’ve never had an art class.”

She looks up all the animals beforehand to study them. She uses acrylic paint, with either a matte or glossy finish. Diane’s artwork is priced from $5 to $300 for the larger pieces. She’s also made two raffle items — a Halloween tree and a wire tree — and is selling those tickets for $1 apiece. She’ll also have line art drawings for sale.

Her efforts have overwhelmed Derek. She shared her plans with him a couple of weeks ago over lunch.

“She’s a very strong mother figure,” he says. “She’s always very giving and loving, and she always wants to help people. But this takes it to a whole other level. It takes a certain kind of person to do that and show love.”

By Josh Bergeron josh.bergeron@salisburypost.com SALISBURY — For Fan Moberg, stepping into the Hall House is like reliving her family’s history.... read more