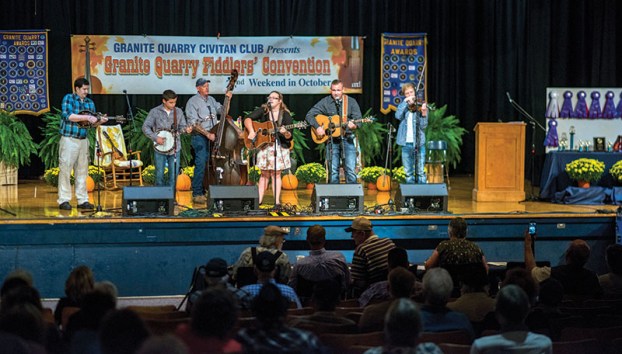 A spinoff of the well-known Union Grove Fiddler’s Convention, the local event started in 1967 when then-principal of Granite Quarry Elementary School James Mathis suggested the idea to the Granite Quarry Civitan Club. Mathis had previously worked as a school principal in Union Grove.

Decades later, the event still draws a crowd of attendees and dozens of participants.

“I enjoy seeing so many local and regional youth coming up in bluegrass and learning the old traditional music and excelling,” Hopkins said. “We’re carrying it on. It’s passing the torch.”

The best of the convention participants received awards and small cash prizes for their talents, but for many the opportunity to play music with friends and acquaintances trumped any awards that came as a result.

In fact, one trio of friends traveled Saturday to East Rowan High School — the site of Saturday’s convention — only to play music with one another.

In a corner of East Rowan High, Efird was joined by Kannapolis residents Brad Martin and Dewey Farmer, who’s attended nearly all of the 51 fiddlers conventions in Granite Quarry.

The trio said they didn’t plan to compete in the convention, but Farmer recalled a time when a group of musicians who started jamming might form a band and win.

“You could come by yourself, and in 20 minutes you might have your bass and your banjo and be ready to go,” Farmer said.

Unlike the trio, members of the band Movin’ on Bluegrass planned to compete in the convention — one of the few contests they’re willing to participate in. Since placing first in the Renofest Bluegrass festival in 2007, the band has opted not to travel for competitions.

Like others, however, members of Movin’ on Bluegrass said they weren’t concerned with whether they received any awards on Saturday.

“When you get on stage, you’re just playing for the people in the audience,” said band member Howard Honeycutt. “That competition is gone and you’re not worried about the competition. You’re having fun.”

Jimmy Ball, practicing across the hall from Moving’ on Bluegrass, said playing music is a stress reliever from his work as an animal control officer.

In order to win, Ball joked that he might intentionally play poorly when his wife sang. If he didn’t play up to his potential on Saturday, he didn’t let on. In fact, his wife finished second runner-up in the vocal category. He didn’t place.

Event organizers also honored Glen Alexander of Charlotte, a fiddler, for his accomplishments in bluegrass and traditional music.

By Susan Shinn Turner For  the Salisbury Post In the summer of 2015, Tom and Diane Jones’ son moved to... read more