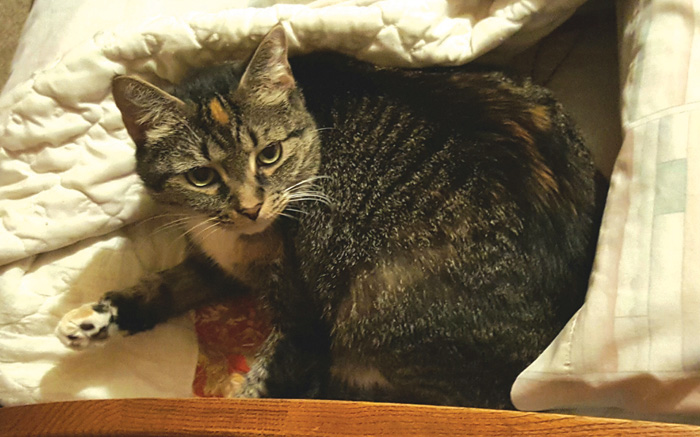 This “Widget” is not an inanimate thing, but a female, gray-brown tabby with an unusual orange marking on the top of her head. I’ve never seen this orange marking on another tabby’s head, and neither has her veterinarian. She belongs to my son Jeremy and his wife Rose. Jeremy, being into computers, electronics, and all of those “trappings,” named his cat something different:”Widget”( “Widge,” the one-syllable, more “endearing” term).

Someone might say:”Old Williams has run out of subjects, since he’s writing about a cat,” but I beg to differ. Actually, I DEMAND to differ!

Multitudes of people post cat pictures on Facebook, writing “captions” about them, which, if cumulatively strung together (grammatically, of course) would equal volumes.

Steinbeck wrote about a dog in “Travels With Charley;” but I’m not comparing myself to Steinbeck. I’ve read Steinbeck; and I’m no Steinbeck (I’m no Senator Lloyd Bentsen either, and neither am I Senator Bob Dole, despite the fact that in the second paragraph of this piece, I refer to myself in the third person).

My son, Jeremy and his wife Rose live with my 90 year-old mother-in-law Doris to look after her. The other day, I was “elder-sitting” her (“elder-sitting,” Doris’ term), as Jeremy and his wife Rose had traveled to Winston to visit with my daughter Rachel and attend the Dixie Classic Fair. Rachel and Rose enjoy the rides more than Jeremy (me included with him) as it was my late wife Diane who rode the rides with Rachel at theme parks, while Jeremy and I watched.

Rachel has a cat, Guy Smiley, endearingly, Boo Boo. When I sing Boo Boo over the phone to Guy Smiley, his ears perk up and he looks all around. Singing “Boo, Boo, Boo” worked for Bing Crosby (I’m no Bing Crosby either, but I’m not bad).

Sometime that afternoon, Doris exclaimed: “Where is ‘Widgey’? I haven’t seen her all day!” (“Widgey,” another term of endearment).

I searched the “proverbial high and low,” as far as my other yet-unreplaced hip would let me.

Remembering Widget sometimes likes heights, and that Jeremy was in the attic briefly before leaving for Winston, I pulled the chord on the drop-down steps ( I couldn’t ascend, but hoping that if the cat were there, “descent” might occur to her).

In the light of my upwardly directed flashlight, a black cat at the opening’s edge stared down. Widget hadn’t changed color; this was a stored Halloween yard decoration incorporating a real-life picture, like children’s birthday cakes seemingly having a detailed movie frame of Superman or Darth Vader miraculously consisting of icing.

Next, I walked around the yard, speaking in a loud enough voice, but not yelling, thinking Widget was scared and likely, close by. As I made my way around the yard, my worry “degraded” her name into even more “endearing” terms: “Widgey Pie,” “Widgey-Pookum,” and Widgem-Doodle” (you can see why I didn’t yell).

When I gazed upward, I saw no “Cat on a hot-shingled roof,” only roof, gutters, and a few voluntarily- sprouted pine twiglets.

Looking into partially mold-covered basement windows which barely peeped out above the ground, I saw no cat eyes peeping back at me.

I had to return home just before Jeremy and Rose returned. Rose later texted that Widget was okay, and that when Widget heard Jeremy’s voice, she emerged from her ingenious hiding place, the drop-down area of the desk where Doris formerly had her typewriter when she ran her tax return business.

The next day I stopped by to see Widget, because after all of that searching and worry, I just had to see for myself.

There she was, lying on Jeremy and Rose’s bed, giving me that typical cat “What’s with you?” look when I rubbed her head and said “Widgey!”( I don’t think she has an “endearing term” for me).

I now had closure, not the open-casket-at-funeral-home kind; but instead, closure signifying a putting away of fears of feline whereabouts, with the resulting joy that The Widge is still with us!