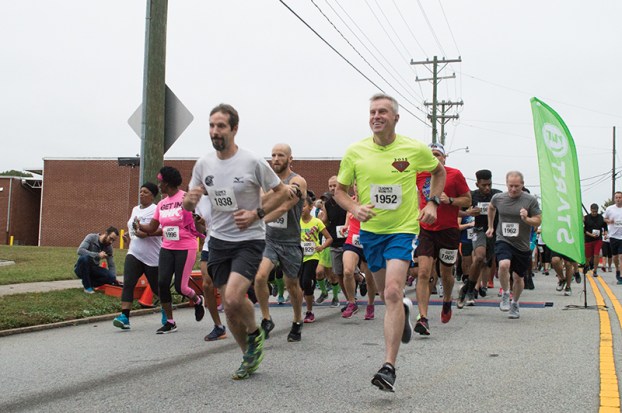 Josh Bergeron / Salisbury Post - A crowd of runners takes off from the starting line of Food Lion's 6k race on Saturday. The race was held to celebrate the company's 60th anniversary. Josh Bergeron / Salisbury Post – Jason Frost, Monicaa Fluck, April Boyd and Nica Keck pose for a picture on Saturday before the start of a Food Lion 6k run. The run was held to celebrate the company’s 60th anniversary.

Starting at Food Lion store No. 1 — on Mahaley Avenue — the race drew about 320 participants. All proceeds from the race will be donated to Rowan Helping Ministries and Second Harvest Food Bank, said Food Lion President Meg Ham.

Founded on Dec. 12, 1957, Food Lion briefly considered hosting a 60K to celebrate 60 years of operation. Because 60 kilometers is more than 37 miles, the company opted for a more manageable 6 kilometers, Ham said.

Just before the race started, Ham announced that Food Lion had raised enough money to donate 250,000 meals to Rowan Helping Ministries and Second Harvest. She said Food Lion believes people shouldn’t be faced with choices about whether to purchase food or pay rent.

Meanwhile, participants in the race started running shortly after 8 a.m. The course took participants east on Mahaley Avenue, past Knox Middle and Overton Elementary schools and down parts of the Salisbury Greenway.

Among the 6K participants were Susan Glover, Jan Owens and Teressa Turner. The trio said their strategy for the 6K was to alternate between walking and running.

Ham said Saturday’s 6K will not be the only event held to celebrate Food Lion’s 60th anniversary. In December, the company also plans to bury a time capsule at its headquarters.

Headquartered in Salisbury, the company was also founded locally under the name Food Town. Founders of Food Lion were Wilson Smith, Ralph Ketner and Brown Ketner. Now, the company has more than 1,000 stores across the country. It employs more than 63,000 people.

SALISBURY — As she described the stained-glass window that dominates the stairway of the Hambley-Wallace mansion, Whitney Wallace Williams received a nice... read more