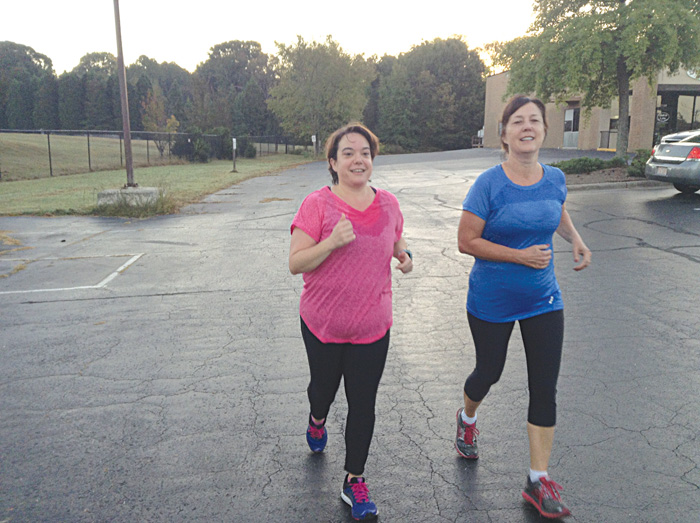 Brooke Taylor and Michelle Patterson finish up their 4.5 run on a Thursday morning.

When last we visited, Brooke was going strong and Vivian was on the disabled list. Those things stayed the same as we came to the end of September with changes set for October. I’ll cover those first.

Vivian Koontz, Events Organizer for Salisbury Parks and Recreation, had a knee issue in August and September and has been unable to return to exercise. Physical therapy for three weeks didn’t help and an orthopedic doctor had not found the issue as of press time. Vivian chose to sit out the rest of her year with our weight loss and wellness program. Hopefully, she will return to exercising soon.

Last week, I ran with Michelle Patterson, Director of Fun at Patterson Farm, who was very successful and the star of last year’s program. She mentioned that she had lost her motivation and I was immediately struck with the idea that Brooke needed a partner and it would get Michelle going too. So that is where we start October. With the changes, we are looking more forward than backward.

The star of the 2017 remains Brooke Taylor, who just keeps getting it done. Circulation manager for the Rowan County Public Library, Brooke has developed some great habits. She said, “I’ve been running 5 days a week, at least 3 or 4 miles depending on the day. I’m still using My Fitness Pal to log food, paying specific attention to calories/calories from fat/grams of sugar. During summer, I loved all the fresh/raw vegetables and fruits that were accessible. Now I am moving into more cooked vegetables and soups with alternative seasonings. I am a little ‘obsessed’ with a guide I found online about minimally processed foods; some I have already been eating (boiled eggs, bananas, sweet potatoes) and some I have added into my diet (berries, quinoa). Every day is a constant battle of burning off more than I take in.”

Michelle hasn’t been sitting around either. She said, “I have been running, with some weight lifting, strength and stability classes and yoga since January. In May, I was able to reduce my last remaining blood pressure medicine in half. I would love to be able to be completely off blood pressure medicine. I need a little motivation to stay committed to an exercise routine during these hectic months on the farm. I would also like to achieve my 500-mile running goal that I set with the running club.”

Michelle has a shoulder issue that came from lifting a heavy piece of metal and favored it on her first run with Brooke this past Tuesday. She visited Fowler Physical Therapy about it on Wednesday. Michelle gained seven pounds during 2017 and plans to lose nine by the end of the year.

Brooke wants more fast. She said, “My BP has been consistently lower the two times I have visited my doctor this year, so I was able to cut the dosage of my BP medicine in half. If I keep salt intake to a minimum and continue with running, the doctor feels I should be able to stop taking BP medicine altogether. Total cholesterol dropped 41 points which must be directly related to better eating and more physical activity. My weight is down 41 pounds for the year so far.”

“Long term, I HAVE to lose 28 more pounds before Jan 1. Short term, I want 5 pounds and then 5 more, and then 5 more, etc. I want increased running distance of 5 miles and to run Winter Flight in January. I am really excited to be working with Michelle. She did such an amazing job last year, and has been a constant ‘behind the scenes’ encouragement to me this year already. I jokingly called her my hero at the beginning of the year, but it’s true. She has been here, done it, and succeeded, which is what I want to do. I think we are both highly motivated to have a big finish and fun along the way!”

The top quote came at the start of our pre-dawn run on Tuesday. Brooke told Michelle about how she has started to wear a belt with a light on the back. A motorist stopped her the other day and said, “I thought sure it was an Amish wagon ahead of me.”

Yes, the fun is back and I bet we’ll laugh a lot in October on the way to some good success. See you in early November!