60th Celebration for the Catholic Daughters of Court Sacred Heart 1759 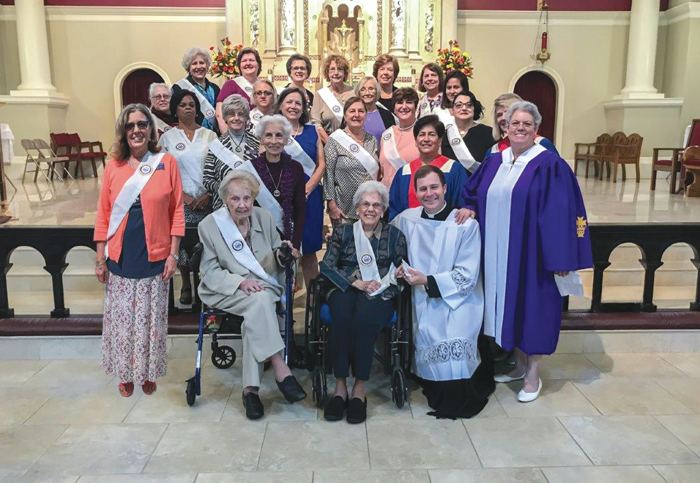 The Catholic Daughters Court Sacred Heart 1759 celebrated the 60th anniversary of their charter on Sunday, Oct. 8, 2017. The day began with the Holy Mass celebrated by Father Lucas Rossi at Sacred Heart Catholic Church in Salisbury, North Carolina. In attendance at the Mass were three of the original charter members – Mrs. Thelma Boulus, Mrs. Charlotte Gardner and Mrs. Charlotte Taylor.

Later in the day, a reception was held at the home of Mrs. Frances Edwards in honor of the occasion. The Taylor/Edwards home was the location for the 25th tea hosted Mrs. Taylor, and the 50th tea hosted by Mrs. Edwards. Helping Mrs. Edwards were Mrs. Karen Kehr and Mrs. Kathy Seybold. Ms. Patricia Wayne provided the flower arrangements, Judge Beth Dixon assisted with refreshments and a 60th anniversary cake was given in honor of Mrs. Pat Moore, a longtime member, by her daughter Mrs. Peggy Fisher. In attendance at the reception were the current court members and Sister Susie Dandison, the fourth living charter member.

Court Sacred Heart was started in 1957 by 38 visionary women of Sacred Heart parish of which four of the original charter members are still living including Mrs. Thelma Boulus, the first regent. Mrs. Gardner said the journey of CDA began with receptions and dinners for priests and the bishop when they visited Sacred Heart. Over the years the CDA motto of “Unity and Charity” has grown in support for the church and community. Some of the ways include the church bereavement meals, assistance at church functions, monetary donations to the church, the school, and the scouting programs, a Quilting Ministry, support for Rowan Helping Ministries and the Pregnancy Support Center.

The women began a bazaar and a Louisiana turkey gumbo dinner every other year to fund their donations. In recent years, the bazaar was dropped and the turkey gumbo dinner became an annual event and includes handmade centerpieces by Mrs. Gardner and Ms. Wayne. In this, its 47th year the gumbo dinner will be on Nov. 3.

Today’s Sacred Heart Catholic Daughters include members from ages 21-100. Mrs. Gerry Butler, the oldest living member, turned 100 this year. She has been a member since 1958 and has served as a local, a state, and a national regent for Catholic Daughters of the Americas. Mrs. Vickie Kotlarz is the current regent. Other officers include Ms. Ellen Kirk, Mrs. Elia Gegorek and Mrs. Phyllis Renn.