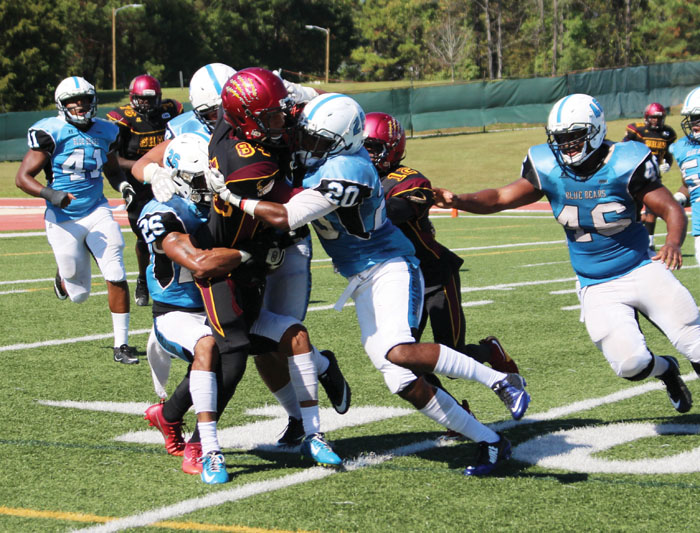 DURHAM — No matter how much grief this season dishes out, Livingstone’s winless football team keeps coming back for more.

“It’s the same old story,” coach Daryl Williams said after Livingstone was thumped, 35-14, by Shaw University. “We lose our focus and turn the ball over four or five times. Nobody lines up and beats us goal line to goal line, but every week it feels like Livingstone is playing against Livingstone — and we’re our own worst enemy.”

Livingstone (0-7, 0-4) had five turnovers against Shaw (3-4, 2-2), a team the Blue Bears defeated the past three seasons. It was a 7-0 game early in the second quarter when Spencer Ludin fumbled a punt return and Shaw recovered at its own 47-yard line.

“That was a bang-bang play,” Williams said. “Spencer looked like he called for a fair catch, but couldn’t hold onto it.”

During the break, a baffled Williams issued an all-points-bulletin to the Blue Bears.

“I told them, ‘I’m not mad or upset. I’m disappointed in our effort,'” he reported. “We weren’t doing what we’re supposed to be doing. I’m frustrated and disappointed that we’re not executing. We were a little jittery in the first half. It took us a while to get going.”

The second half was better. Quarterback Thadeous Bell — who replaced injured starter Jamaal Brown in the first quarter — steered LC to a third-period touchdown following a rare two-turnovers-on-one-play sequence. Facing fourth-and-20 from the Shaw 38, Bell’s pass was intercepted by SU’s Kaleb Barfield. He fumbled during his return and Livingstone junior Da’Mon Walton pounced on the ball, setting up Andrew Gamble’s 25-yard TD reception one snap later.

Livingstone’s final touchdown provided a too-little/too-late shot in the arm. Only 20 seconds remained when Bell capped a 12-play drive with a 2-yard touchdown flip to freshman Brandon Duncan. It was his first collegiate TD.

“We have the capability and potential to move the ball against anyone in our conference,” said Williams. “We’re just not good at doing it consistently, doing it right every single time.”

At this point, it’s hard to imagine things getting much worse for the Blue Bears.

“We’re not deflated,” Williams insisted. “We just need to tighten up. Sometimes things get weird, but we’re OK. Everybody needs to concentrate on doing their job. We can’t make mistakes against decent football teams and expect to win. That’s my job to figure out. That’s why they call it coaching. Today was unfortunate. All I can say is Shaw was a better team.”

NOTES: This was LC’s sixth and final road game of the season. It finishes with three straight home matches beginning Saturday against Winston-Salem State. The Blue Bears have lost their last 10 games. … Brown completed two of four passes for 22 yards before injuring an ankle on a two-yard sack. Xavier Longerbeam, LC’s early-season starter, remained sidelined with a shoulder injury. … Bell passed for 240 yards but was sacked five times, which explained Livingstone’s total of 22 yards rushing. … Downing passed for 254 yards and was sacked three times. Elems Ukwu led the Blue Bears with nine tackles.