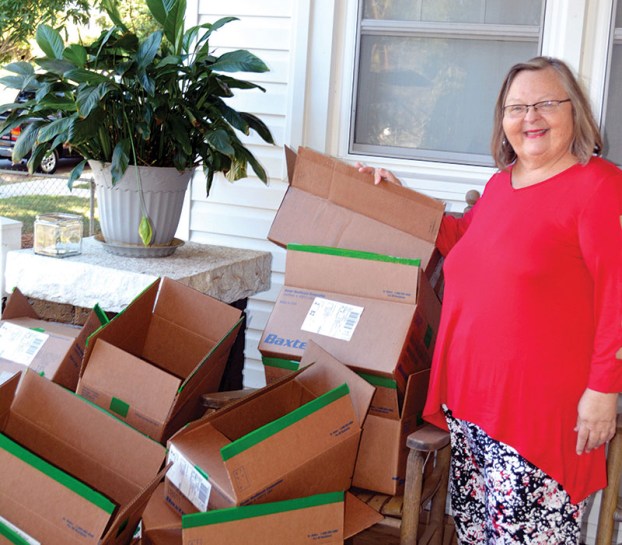 Becky Lippard stands with empty boxes that held about a month’s worth a dialysis supplies. She received a new kidney Sept. 6. Photo by Susan Shinn Turner, for the Salisbury Post.

No matter what, the show must go on. And for the past six years, the show did go on for Becky Lippard. No matter what show she was in at Piedmont Players or Lee Street, she took the stage with a smile. Even if that meant rushing home afterward for nine hours’ worth of peritoneal dialysis.

On a recent sunny Sunday afternoon, a pile of empty boxes — practically taller than she — littered the porch of her cozy Salisbury home. Dialysis is done. The 25-pound machine went back last week. No need for further shipments of fluid to filter her kidneys, which had failed in 2010 — hence all those empty boxes.

Seven years ago, her nephrologist told her that for whatever reason, an allergic reaction caused her kidneys to shut down. She could go on dialysis or put her name on a transplant list. Ultimately, she’d need a transplant, but she chose dialysis first so she’d be on Medicare by the time her disability coverage ends.

She went through testing in March. Her transplant coordinator told her in August she was on the list. The Tuesday after Labor Day, the coordinator called her at 12:15 a.m. and told her a kidney was available.

The details: a woman, age 40 to 48, who weighed 180 pounds, had a fatal stroke, and her kidneys were not affected. Her condition was considered “low risk,” meaning she had no other health issues.

With that, she packed a bag, called a few friends, and drove to Wake Forest Baptist Medical Center, where her surgery was set for 8 a.m.

“I got there and they prepped me and there it was,” Becky says. Before she went to sleep, she looked over and realized her new kidney was nearby.

It worked immediately. The others remained in place. Now, she says, “I’ve got one working kidney and two duds!”

Incredibly, the dialysis didn’t limit her activities too much — but she did have to plan a lot.

“When I did a show on Saturday night, I had to rush home,” Becky says. “I had it all set up to attach to the machine and do my treatment.”

A couple of times, she was delayed, and late for church on Sundays. She works part-time as the organist-pianist at Third Creek Presbyterian, and also works part-time at Landmark Church as secretary.

“I wanted to work, so I got these part-time jobs,” Becky says, “and that’s worked out really well.”

She also had to be aware of germs, but was pretty free to do most of her activities — including water aerobics at the Hurley Y. She felt better after she started dialysis as her kidneys were filtered each day, but since the transplant she feels better than ever.

Becky is a 1973 graduate of South Rowan High School, and was a music major at UNC, where she graduated in 1977.

“The summer after my freshman year, I was in ‘The Music Man’ here,” she says. “That was my first show and I loved it. I’ve been in it three different times, and it’s my favorite show.”

“Becky and I have been friends for over 40 years,” John says. “When she started nightly dialysis she took it in stride. We would be in rehearsal at Lee Street theatre and she would leave promptly at 9:30 so she could get home to start the nine-hour treatment. She always hoped that she would get the ‘new kidney’ call,  and when it came she was ready. It was a perfect match and she has recovered quickly. I asked her what she was going to do now that she’s not ‘plugged in’ every night! She was moved by all the support she has received from her friends and the community. She had no idea so many people cared. She looks great and says she feels even better!”

“Becky Lippard is one of the most talented, entertaining, generous, complex people that I know,” Patsy says. “We have had wonderful times at Piedmont Players and Lee Street.”

Becky, Patsy and others have been involved with the Lee Street cabaret show for a decade, Patsy says. “Becky rehearsed us, taught us songs, wrote parts for some of the songs, and got the show off the ground. She can just jump in and do anything.”

Patsy paid a recent visit to her longtime friend, she says. “She was chipper, rested and relieved. She looked great. She’s just a joy to work with. I’m lucky to have her as a friend.”

Becky is also close to her first cousins.

“Lynn Lippard was the first grandchild after me, and he was my playmate,” Becky says. “And then he went to State! And his children!”

Different school ties don’t dampen her love for them. As a matter of fact, her new kidney originally came to Duke Hospital — and that’s perfectly all right with her.

“Becky has always been a strong influence in our lives,” Lynn says. “When she first got sick, it was difficult to hear and we worried about her. But she was strong-willed — or hard-headed — enough to make it work. And she never complained.

“I have been amazed at how well she has recovered, and how good she feels. It is a blessing that she got the kidney when she did, and we pray for the family of the donor.”

Becky is past the “danger zone” for rejection, although she’ll have to take anti-rejection medication for the rest of her life. She hopes one day to meet her donor’s family.

“It’s important to me that I can tell them that this donation has made a difference in my life,” she says.

She was devastated, she says, by her initial diagnosis. “But once they said I could do peritoneal dialysis, I felt like I could take control.”

Justin Dionne, former managing artistic director at Lee Street, says he had no idea that Becky had been on dialysis for so long. “She was always positive and tough. Always brought her ‘A’ game and gave her heart to her performances without ever letting on how much trouble it may have caused her.”

“Everybody has to deal with different things,” says Reid Leonard, resident director of PPT. “Becky needed something good. It was time, and I’m thrilled it has worked out for her.”

The call and the surgery happened so fast, she says, she didn’t have time to stress about it. She’d called Pastor Mike Robinson at Landmark and said she wouldn’t be in the next day. “Then he showed up, and that kept me calm. We talked about everything but the transplant.”

Not surprisingly, Becky has become a vocal advocate for organ donation.

“People need to know that everything can be used — your heart, your eyes, your skin,” she says, along with kidneys. (She’s named hers Katy.) “All you have to do is tell them you want to be an organ donor when you get your driver’s license.”

She adds, “This has been such an uplifting and humbling experience. I just smile a lot. All this worry is off me. I’m just grateful. I feel less burdened.”

Becky loves to go to the beach — and now she can go without a 25-pound machine and boxes full of supplies.

“I think it’s a miracle, I really do,” Becky says of her experience.

By Darrell Blackwelder For the Salisbury Post SALISBURY — The Rowan County Chamber of Commerce is sponsoring its 2017 “Beer and... read more