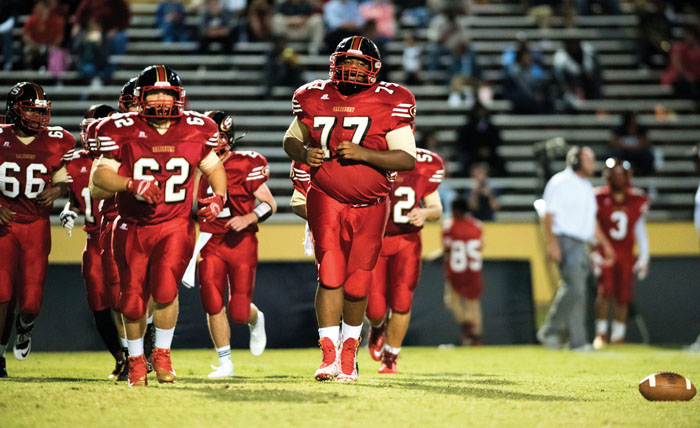 JON C. LAKEY / SALISBURY POST Salisbury's Rondarius Peel (77) leads the offense back on the field during a game on Sept. 8 against Thomasville. The Hornets have a big game tonight at Ledford.

Coaches hate to call any game the biggest of the year, because if you lose the “biggest game of the year,” then it’s hard to put a lot of meaning on the games that follow.

All three of those games are much bigger than most, and while it’s  too early for them to decide conference championships, they’ll have a serious impact on who wins those championships.

Salisbury and Ledford have separated themselves from the bulk of the Central Carolina Conference pack, and they’re clearly the second-best and third-best teams in that league, in some order. What isn’t clear is who’s No. 2 and who’s No. 3 behind powerhouse North Davidson, but after tonight, we’ll know.

The South Iredell-West Rowan matchup comes in what is just Week 2 as far as North Piedmont Conference games, but after what South Iredell did to Statesville last week, it’s clear West Rowan is the only team  that has any chance of stopping the Vikings from running the table in the league.

Out of 410 teams,  Davie’s schedule to date ranks as the 34th toughest in the state, and it’s about to get a lot tougher. Davie takes on West Forsyth and Glenn, both undefeated, in its next two outings.  The West Forsyth-Glenn showdown will occur on Nov. 3 in Kernersville, and if both get past Davie that will be a game bigger than big. That could be a huge game.

A.L. Brown’s game at Cox Mill is bigger than it looked a week ago because the Chargers just knocked off Concord. So this is a matchup of two 1-0 teams in a league where there are only five conference games. Every league game is pretty big.

As far as North Rowan, which will get a visit from the Chatham Central Bears from Bear Creek at 7 p.m., this is a meaningful game only in the sense that the Cavaliers need a win to stay tied for first place in the Yadkin Valley Conference. North should win big, probably running-clock big. But next on the schedule is a bigger than big game for the Cavaliers when they travel to New London to take on the North Stanly Comets. That game will be gargantuan.

Thomasville at South Rowan is a CCC game that isn’t big at all as far as the standings. Both teams are well down the list. But it’s still reasonably big for South Rowan. What would a two-game winning streak do for the program? A lot.

Thomasville has more speed, and a South win, as badly as the Raiders would love to get one at home, would be an upset.

Finally, there’s Carson at East Rowan, a big game, not because the teams are strong, but because it’s one of the county’s fiercest rivalries.

It’s basically a resistible force against a moveable object. Carson has had the county’s least productive offense, while East’s defense has permitted an astounding 152 points the last three weeks. The thing about the Cougars is they’re getting better. Their last two games have been their best two. The Mustangs have explosive athletes, but they’ve been blown out a lot lately.

History: North leads 4-0, winning all four meetings on the Cavaliers’ last tour of the YVC (2009-2012). Those games weren’t all that lopsided, but North was mediocre most of those years.

The season: Chatham Central’s win came at Hobbton (0-7) on Aug. 25.  Chatham Central lost 58-6 to North Stanly and 61-0 to West Montgomery, so this outcome should be in that  same range. Ranked seventh in 1A, North Rowan has won five straight since losing early to 3A West Rowan.

History: East beat Carson twice in 2012, but East’s playoff win that season was its last triumph in the series. Carson has won four straight to take a 7-4 lead. Carson rolled up 369 rushing yards against the Mustangs last season, with Cole Sifford getting 149.

The season: While both of the rivals have been mauled often, Carson has been mauled by a tougher schedule. East hasn’t won since it blasted South Rowan on Sept. 4. Carson owns an overtime loss (to a team that had East down, 33-0) and a win in its last two outings. Carson had its best rushing game of the season last week and also got Sifford back. A lot of stuff seems to be trending toward another Carson victory, but if there’s one thing that can revive the Mustangs, it will be the sight of Carson jerseys on their field.

Justin Smith, who started the season as East’s QB, has enrolled at Carson. That won’t be a factor this season, but it may have an impact on the Cougars in 2018.

History: Thomasville was fierce in the 1960s and early 1970s and beat South annually from 1961-1972. Thomasville also won a playoff matchup against a sturdy South team, 6-0, in 1978. The schools haven’t played since then, so the Bulldogs still lead the all-time series, 13-0.

History: They were pretty big rivals the last time Ledford was a CCC member and clashed every year from 1997-2008. Ledford ruled most of the early meetings, but Salisbury was taking charge in the later ones. Ledford leads the series, 9-8.

Ranking/Points: Ranked 145th in the state by MaxPreps, Ledford has scored 184 points while allowing 130. Salisbury has bludgeoned opponents, 215-67, but still is ranked only No. 172. That’s mostly a strength of schedule thing. Salisbury has smashed a lot of the lesser CCC squads.

The season: Ledford hasn’t scared anyone with tight CCC victories against West Davidson, Lexington and Thomasville — that’s three teams the Hornets handled a lot more easily — but the Panthers still win every week. Ledford hasn’t lost since opening night against 4A Glenn, and Glenn is still undefeated.

While Ledford has won six straight, Salisbury has won five in a row, with all five wins coming by at least three touchdowns.

Ledford junior safety Coleman Reich (6-0, 188) is a UNC commit. He could limit Salisbury’s big plays, but the Hornets have been hitting people from all directions with a lot of different people through the air and on the ground.

Ranking/Points: South Iredell has outscored opponents 235-116 and is No. 65 in the state, according to MaxPreps. West Rowan finally moved into positive numbers as far as points scored and allowed last Friday. The Falcons have scored 171, while allowing 155. West is ranked No. 122 in the state.

The season: West is on a three-game winning streak after a shaky start .  South Iredell dropped back-to-back road games in September. Both teams have lost to Mooresville, although South Iredell’s 14-13 loss was much closer.

South Iredell brings a lot of talent to Mount Ulla, including Shrine Bowl defensive lineman Chandler Medeiros, an East Carolina commit, and QB Brady Pope, who is committed to the Charlotte 49ers. Pope has staggering stats — 1, 896 passing yards, 16 TDs, and only three picks.

A.L. Brown and Davie County threw for big numbers to beat West. That doesn’t bode well for the Falcons against a QB such as Pope.

History: Davie’s defense humbled the Titans in 2016 in a 20-3 victory that ended a four-game skid against one of the War Eagles’ biggest rivals.

Davie has been up-and-down, but started CPC play with a bang by mashing R.J. Reynolds.

West Forsyth doesn’t post stats for Shrine Bowl linebacker K.J. Henry, but they would be frightening if they did. Henry, almost 6-foot-6 and 235 pounds, is being recruited by schools such as Alabama, Clemson and Georgia and is considered one of the nation’s top five recruits by ESPN.

West Forsyth appears to be better than Davie on both sides of the ball and also has the home field.

The season: Cox Mill is mighty good in volleyball and boys basketball and gave football fans some unexpected excitement last week by beating Concord. Even with that win, Cox Mill has a losing record , but it should be noted that all four losses are to teams with winning records. The Wonders have won five straight since losing early to Marvin Ridge. Not only that, they’re 4-0 on the road, and they’ve won at West Rowan and Davie.

The Wonders are stronger and faster on both sides of the ball, and they’ll also probably be focused, given that Cox Mill is coming off an impressive win. The Chargers have given up 33 or more points in all four of their losses, and that’s likely to be the case again tonight.