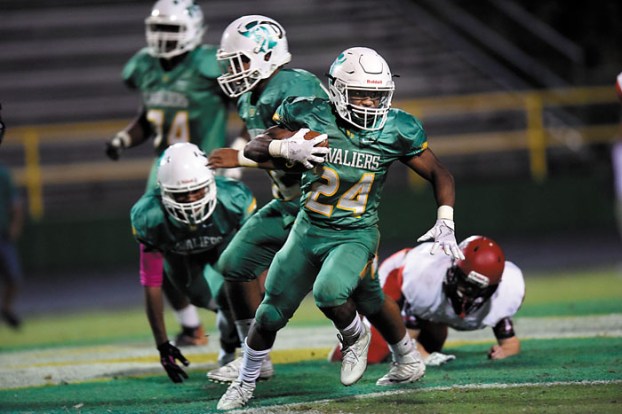 SPENCER — North Rowan senior Jaleel Webster romped for 236 yards on 16 carries and scored three touchdowns, but he was even better in the postgame stuff.

Webster gets it. He showed some perspective on what high school athletics are all about. Webster could’ve talked about the 50 Chatham Central tackles that he ran through or the 50 guys he juked with bobs and weaves, but he took the high road. He elected to praise the guys North had just conquered convincingly, 49-6.

“Those guys we played tonight did not have the talent that we have,” Webster said. “But they get my utmost respect. They played this game right to the end. They played it to the last play.”

That’s all you can do, and the overmatched Bears from Bear Creek did it.

Led by a freshman quarterback (Matt Moore), who’s going to be really good, Chatham Central (1-7, 0-4 Yadkin Valley Conference) trailed only 7-0 after a quarter.

But those 35-point quarters always are helpful, and North had one of those in the second quarter for a 42-0 halftime lead.

Seventh-ranked North Rowan (7-1, 4-0 YVC) celebrated homecoming— many of the green-jerseyed Cavaliers served as halftime escorts for the court — and logged its sixth straight win. North’s only loss came against 3A West Rowan in Week 2.

North wasted no time in showing the visitors what a special player Webster is. After the kickoff, he ran for 9 yards, and then 15, and then 9 more. But North’s first drive ended with a Chatham Central interception by cornerback Logan Staley.

Actually, two of North QB Willis Mitchell’s first four aerials went to the wrong-colored jerseys, as the Cavaliers failed to score in the first nine minutes. After that, the offense relied almost exclusively on the big guys upfront and the legs of Webster and soph Malcolm Wilson (11 carries, 106 yards), who looks like he’ll be the next Webster.

“We want to be balanced, but we had the two early picks and a drop, and we just went with the running game,” North coach Ben Hampton said. “But that was OK. We got back to controlling the line of scrimmage with our offensive line, and that’s something we haven’t done well in some recent games. And our backs ran hard.”

Returning from a concussion, Quintous Smith Jr. got a TD in the opening seconds of the second quarter, grabbing a screen from Mitchell and motoring down the left side.

“He was walking a tight-rope on the sideline,” Hampton said. “But he’s one of those guys who can go all the way any time we get it in his hands.”

It was 21-0 two minutes later when North’s special teams provided a score. Darren Williams and Tyzai Lyles stormed through the Chatham Central line together on a punt attempt.

“I’d blocked a punt earlier this year (against Carson) with my facemask,” Williams said with a laugh. “This one I got with my hand. It just happened.”

Lyles made the recovery in the end zone.

North would score three more TDs before halftime — with short scoring runs by Webster and Wilson sandwiched around a 64-yard jaunt by Webster on which he probably broke a half-dozen tackles. Webster was part butterfly and part bear on that one. He has 13 TDs this season and 30 in his career. He had 202 of his rushing yards before halftime.

“It was a pretty good run, but I wouldn’t have gotten to the end zone without blocks by our receivers,” Webster said. “The runs inside, it’s the offensive line, but those runs on the outside like that one, that’s our receivers blocking downfield. Russell Bacon made a great block on that play —and Quintous Smith.”

With a 42-point lead, the running clock was in play, and it made the second half roar by.

North barely touched the ball on offense in the third quarter, but it did get another touchdown. Tiras Neely, a big lineman, rumbled into the end zone after picking up a fumble. Kaveon Smith made the strip, and Neely was at the right place at the right moment.

“That was the first touchdown of my life,” he said cheerfully. “The ball came out, and I just saw the opportunity to score.”

Chatham Central hit some passes to get down the field against North’s reserves and got a rushing TD from Austin Phillips with 7:04 remaining.

But North’s defense was dominant. Chatham Central had negative rushing yards and abandoned the ground for the air in the second half.

Matthew Hoosier had three tackles for loss. Lyles and Jordan Goodine had two each, Xzavier Davis, who had two punt return touchdowns erased by penalties, had a tackle for loss and an interception.

North DB Josh Ellis had a pretty good night as well. He was named homecoming king.

“We had holding penalties, dropped passes and picks, but a lot of the time I liked the way we played,” Hampton said.

North’s two biggest YVC challenges are coming up — at North Stanly and at West Montgomery.

By David Shaw sports@salisburypost.com MOUNT ULLA —Every party has a pooper. Even on a night when junior quarterback Payne Stolsworth... read more