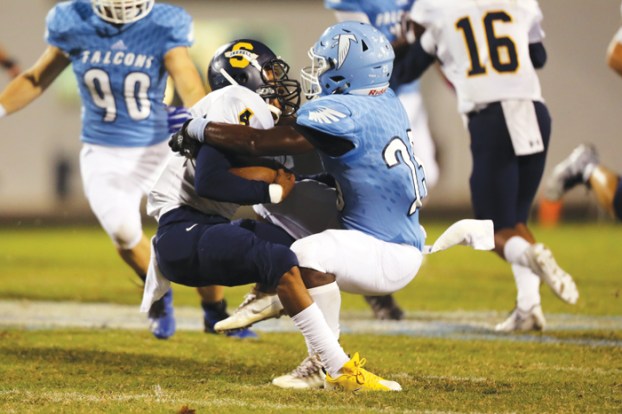 MOUNT ULLA —Every party has a pooper.

Even on a night when junior quarterback Payne Stolsworth etched his name into the West Rowan record book, the Falcons were no match for visiting South Iredell, suffering a dizzying, 57-34 homecoming loss on Friday.

“It’s disappointing,” Stolsworth said after passing for a school-record 358 yards and four touchdowns. “But it’s true what they say — you win as a team and you lose as a team.”

“On film we saw a lot of things we knew we’d have a tough time defending,” said West coach Joe Nixon. “Their offense, with the quarterback and running back they had, moved right through us and their defense never let us get a running game going.”

Pope, a UNC-Charlotte commit, surgically dissected West’s defense with confidence, poise and pinpoint accuracy. He completed 21 of 27 passes, including five that gained at least 20 yards.

“We finally put all the pieces together,” he said after the Vikings passed their midterms with honors. “We did what the coaches wanted us to do. They called the plays and we executed them. It was that simple.”

“He’s as good as they come — and he’s been doing this for three years,” Miller crowed. “Tonight put him over 2,000 (passing yards) this year and close to 10,000 for his career. He’s very intelligent on his pre-snap reads and keeps making good decisions.”

West never did solve him. “He was shifty,” said senior DT Devin Turner. “The dude made plays. Whenever he threw it, he threw it on the money.”

The Falcons spent the night swimming against the tide and led only once — when Stolsworth’s 57-yard touchdown pass to sophomore Jalen Houston provided a 7-0 advantage less than three minutes into the game.

“I ran my route and hit the safety with a hard step to the outside,” said Houston, who was unworldly once again (9 receptions for 170 yards). “Then I made the catch, cut to the inside and ran my fastest.”

South Iredell responded with a cascade of offense and surged to a 36-14 halftime lead when Pope hit backpedaling wideout Dydrion Leach in the end zone on a 27-yard TD play with just 15.2 seconds hanging on the clock. A pair of short touchdown runs by White in the third quarter helped South Iredell’s lead balloon to 50-21. The Falcons choked up and shortened their swing in the final period — scoring on Martavio Rankin’s 6-yard burst and Stolsworth’s 15-yard TD lob to Ty’kese Warren with 5:52 remaining.

“I knew coming into the game we would have to score a lot,” Stolsworth said. “But their quarterback did a great job managing the game. He kept plays alive and didn’t take sacks.”

That weight fell to the West defense, which yielded 19 first downs and 244 yards rushing. White was most destructive — weaving his way into, around and through the Falcons’ d-line, lastly on a 44-yard touchdown romp with less than five minutes to play.

“He was a nice back,” Turner said. “When I did tackle him it was a struggle, but I got him on the ground. We just didn’t find a way to win the game. Most of the night they were beating us on anything they wanted to.”

NOTES: Turner recovered a fumble on West’s first defensive series, setting up the game’s first score. Stolsworth threw an interception on a deflected pass late in the first half. … The four touchdown passes gave Stolsworth 17 this season. He completed 23 of 33 attempts. His 358 passing yards surpassed the mark set by Kacey Otto (334 vs. Carson in 2014). … Houston also caught a 26-yard TD pass in the third quarter, his 10th of the season. … West visits North Iredell and South hosts Carson next Friday.