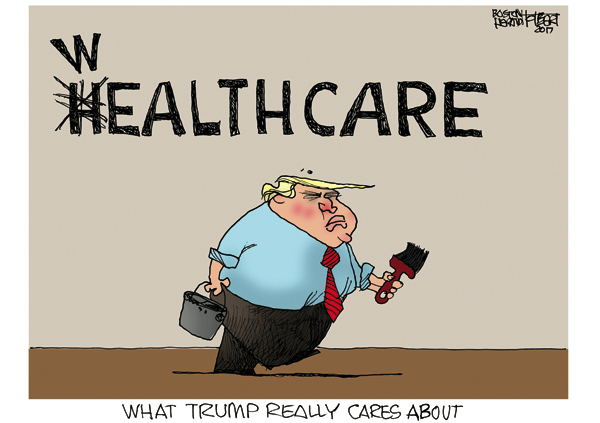 President Trump is about as opposite from Barack Obama as two men can be, but he’s learned one thing from the former president — even though Trump and other Republicans criticized Obama sharply for it at the time. When Congress won’t or can’t produce the legislation a president wants, there’s always the executive order.

On Thursday, the target was the Affordable Care Act, which Republicans have vowed for years to repeal and replace but can’t quite work out. The current president signed an executive order Thursday morning that will, among other things, allow consumers to buy short-term, non–ACA compliant insurance plans — a boon for young, healthy people likely to go that route, but a potential financial threat to older people or those with pre-existing conditions. On Thursday evening, he announced he would stop scheduled payments to insurance companies that help lower deductibles for low-income customers, another blow to vulnerable populations.

Thus the president begins to unravel a system that has helped make health care affordable for millions of Americans. Everyone agrees the ACA is imperfect and needs some degree of revision. An evenhanded solution, though, is more likely to come from congressional action than presidential fiat. Working that out will simply take time.

Trump’s inexperience in governance is a double-edged sword. He is not bound by tradition or the status quo — in fact, he delights in upsetting Washington’s business-as-usual culture. But he also either doesn’t understand or lacks respect for the give and take of legislating. The fact that Republicans haven’t been able to agree on an ACA replacement signals the complexity of the situation — one that an executive order might just make worse.

What Thursday’s order ultimately will mean for consumers is unclear. There’s likely to be little immediate effect on Obamacare markets. The enrollment period is imminent, too imminent for  changes in regulations to be worked out in time for the coming year.

What is clear, though, is that Trump is following in Obama’s footsteps — and then some — when it comes to issuing executive orders. Trump called Obama’s use of executive orders a “basic disaster,” but Trump has signed 49 executive orders since coming into office on Jan. 20. By this time in Obama’s first term, he had signed 26. The irony is inescapable.