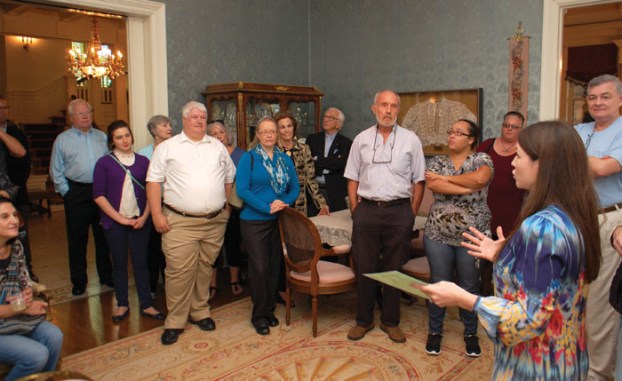 Richard Hambley, center left with the white shirt, and Coleman Hambley, with the glasses around his neck, are direct descendents of E.B.C. Hambley, who built the 1902 mansion at 508 S. Fulton St. Richard is a great-grandson; Coleman, a grandson. They're listening to Whitney Wallace talk about the front parlor with the rest of a private tour group Friday. Mark Wineka/Salisbury Post

SALISBURY — As she described the stained-glass window that dominates the stairway of the Hambley-Wallace mansion, Whitney Wallace Williams received a nice nugget of new information from a white-haired man in her tour group.

The Hambley family coat of arms is depicted in the left and right panes, the man noted.

Speaking up was Richard Hambley, an adopted great-grandson of E.B.C. Hambley, the man who paid for this impressive residence to be built back in 1902-03.

Together, Richard Hambley and Whitney Wallace Williams represented the two families that have dominated the history of the house at 508 S. Fulton St.

While E.B.C. Hambley, a great entrepreneur of his day, built the 20-room, 10,000-square-foot mansion and spelled out every detail for its grounds, it is members of the Wallace family who have lived in the house from 1927 to today.

Most notably, Leo Jr. and Virginia Wallace — Whitney’s grandparents —  called this home for roughly 70 years. But Friday’s OctoberTour luncheon at Salisbury Station and the private tour of the Hambley-Wallace estate that followed were more devoted to the Hambley side of things.

At the luncheon, Susan Sides, president of the Historic Salisbury Foundation board, presented a detailed history of E.B.C. Hambley and the Whitney Dam hydroelectric project he played a major role in initiating.

Foundation officials also were thrilled to have members of the Hambley family on hand for the luncheon and tour. The guests included Richard, his wife, Angela, and their daughter, Amanda, all of Charlotte; Coleman Hambley, a grandson of E.B.C. Hambley, from Charlotte; and Charlotte Hambley Martin Davis, a great-granddaughter from Wilmington.

The Hambley-Wallace House is a main attraction and one of the sites on this weekend’s 42nd edition of OctoberTour, which opens today and continues through Sunday. The mansion underwent a major restoration in 2012, the last time it was on the tour.

For Richard Hambley, Friday’s private look at the home was his first visit here since OctoberTour 1989, when he remembers having a long conversation with Leo Wallace Jr. in one of the parlors.

Richard, the adopted son of E.B.C. “Barry” Hambley, has a keen interest in the history of both the original E.B.C. Hambley and the house, and he has reviewed many of the original documents related to its construction.

When Whitney Wallace Williams led her group into the large dining room, Richard noted the pattern in the wainscoting matches that of the house’s original dining room table, which he now owns.

Richard said the table is 5 1/2 feet in diameter but can be expanded to 12 feet.

The bust of a woman is carved on each leg. The left side of her face is intricate, a symbolic reference to the master woodworker who made the piece. The right side of the busts are much less detailed, to symbolize the master’s apprentice.

Richard Hambley says he has the original dining room table, buffet and server from the house. On the porch, he paused at the front doors and said they were hand-carved.

From what Richard has read, Lottie Hambley (E.B.C.’s wife) ordered many of her furniture pieces from Pittsburgh.

While they were in the dining room, Hambley confirmed for Williams that the room once had leather wallpaper.

As Janie Lane led the tour group on a walk across the grounds, Hambley said the stables in back cost $2,000 back in 1902. He said his great-grandfather ordered three bushels of Kentucky bluegrass for the lawn, and Lottie Hambley won the argument as to whether they should have a swimming pool or tennis court.

“He lost,” Richard said. “She got the tennis court.”

Hambley remembers seeing documents that E.B.C. Hambley also wanted to build a 16-by-35-foot greenhouse on the estate, but he eventually killed the idea.

Lane said one thing written into the original deed stipulated the grounds would always include a maintained rose garden, which happened to become Virginia Wallace’s passion. A large rose garden was restored and dominates one of the side yards today.

Hambley said his grandparents, who went by the names Tops and Dudy, lived in the mansion with Lottie Hambley for two years after they were married. E.B.C. Hambley died of typhoid fever in 1906. Lottie lived in the mansion until 1917, waiting until all of their five children were grown and living on their own to move.

After selling the house, Lottie moved to Lexington, but the Hambleys are buried in Salisbury’s Chestnut Hill Cemetery.

Egbert Barry Cornwall Hambley was an English mining engineer who traveled the world.

J.J. Truran, whose companies dealt chiefly in mining, sent Hambley to North Carolina to work at the mines in Gold Hill. Hambley married Lottie Coleman of Rockwell, where they handsomely furnished a home and established an elaborate dairy farm. Their herd of Jersey cows was considered the best in the state.

Their dairy made cheese and butter, and their home was elaborately decorated with tiger-skin rugs and African relics from Hambley’s trips to India and Africa. Among the valuable artwork on their walls were the “Country Doctor” and “Country Dentist” paintings of Anthony van Dyck, Sides said.

Hambley became involved in most major enterprises and organizations. He started Salisbury Gas and Electric Co. and was a director of Salisbury Cotton Mills, Davis and Wiley Bank and the N.C. Trotting Horse Breeders Association. He served as secretary-treasurer of the N.C. Dairymen’s Association.

Sides said Hambley also was part owner and manager of eight companies related to the Whitney Dam project and the short-lived community that rose from it.

As Hambley turned most of his attentions to mining interests and the Whitney Dam project, he withdrew from farming. Most of his prized cows were sold to the Biltmore estate in Asheville.

Hambley was in need of  electricity for his mining operations, so he joined forces in 1899 with Col. John P.R. Polk, a man from Delaware who had the idea of damming the Yadkin River.

With others, they formed the N.C. Power Co., and Hambley started lobbying investors from New York and Pittsburgh to develop the hydroelectric project. When Polk died in 1900, the plans fell through until Hambley created a new partnership with George I. Whitney, one of the best known stockbrokers and businessmen in western Pennsylvania.

“These two men changed the state of North Carolina,” Sides said. “They began the plan to dam the Yadkin River just above the Narrows and produce electricity. … It was called one of the most unique dams in all history. It was referred to as the ‘Niagara of the South.'”

The unincorporated town of Whitney in Stanly County rose quickly to include 500 houses, three hotels, hundreds of shanties, plank sidewalks, and a lavish clubhouse to entertain investors.

Plans called for the dam to be 38 feet high and 1,500 feet long. Its canal was to be 50 feet wide and five miles in length. Engineers estimated it would take 30,000 train-car loads of stone to build the dam.

“Hambley believed that the result would be the cheapest power in the South,” Sides said.

Amid all these business plans, E.B.C. and Lottie Hambley also built their showplace in Salisbury — another place, it was thought, to entertain the investors E.B.C. always needed.

Hambley made the headquarters for the Whitney Co. the first floor of the then-new Washington Building on North Main Street.

But a rash of circumstances led to the dam’s demise. Hambley died in 1906 at the age of 44. His obituary, which appeared in The New York Times among other publications, said, “He was more successful than any other resident of the state in inducing men with large means residing elsewhere to make investments in North Carolina.”

The San Francisco earthquake in 1906, business tycoons such as Andrew Mellon and Henry Frick, a crashing stock market and bank failures in 1907 all conspired by April 1908 to bankrupt George Whitney, his companies and the dam.

Sides said Whitney owed more than $19 million, while his assets were listed at $7 million.

An epilogue to the story:

• In January 1910, the place known as the old Hambley farm in Rockwell was destroyed by fire.

• By 1915, most of the Whitney buildings were torn down or moved.

• In December 1917, Whitney, who was living in a room of one of his former employees, died of throat cancer.

Sides posed this question: What would have happened to the Whitney Dam project had Hambley lived longer?

“Hambley was well-connected worldwide,” Sides said, “and would not have been dependent on Pennsylvania tycoons for the funding of this project.

“… I absolutely believe that had Hambley lived, we would all be writing our monthly power bill payment to a Hambley company and not to Duke.”

Granite Quarry candidate Doug Shelton wants to be voice for future, not past

GRANITE QUARRY — Doug Shelton, chairman of Granite Quarry’s Revitalization Committee and now a candidate for the Board of Aldermen,... read more