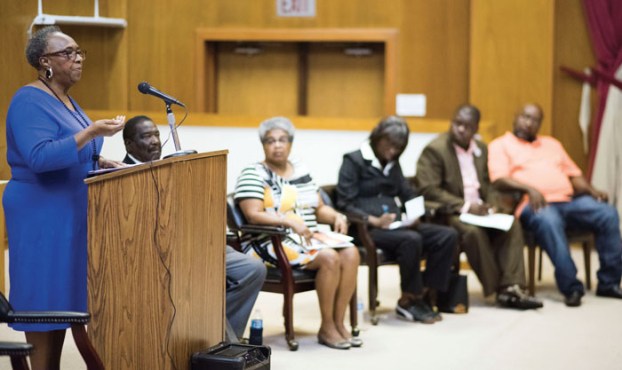 Mayor Barbara Mallett is seeking re-election to the post she has served on for six years. Seated are the candidates for town board, from left, Otis Gibson, Phronice Johnson, Jamilla Kennedy, Tony Hillian and Dwayne Holmes. Candidates vying for mayoral and aldermen seats on the East Spencer town board gathered on Thursday evening to make introductions and answers from moderators and audience members. Jon C. Lakey/Salisbury Post

EAST SPENCER — Growth was the issue that seemed to draw the most discussion Thursday evening at a forum featuring the seven candidates for East Spencer town board.

There were several other topics of discussion as each candidate laid out his platform in one- to two-minute presentations.

The forum, which was hosted by the town of East Spencer, comes at a time when a new generation of candidates has expressed great interest in taking up the challenge of elected office.

Current Mayor Barbara Mallett attended as did one of her challengers, Teon Robinson. Challengers Jamilla Kennedy, Tony Hillian and Dwayne Holmes sat on the panel as did incumbents Otis Gibson and Phronice Johnson, both of whom are hoping to maintain their seats as aldermen.

James Cowan, who is also running for mayor, and Alderwoman Tammy Corpening, who is running for re-election, did not attend.

Mallett and Robinson offered a sharp contrast on how each would govern.

Mallett, who is seeking her fourth term, said she’s put in her time and credits the current board with creating “livability” to the town.

“When we talk about business, what supports business, the people. People have to live here,” Mallett said.

She said housing is needed if the town is going to grow. She noted that there are two duplex apartments being built on Cedar Street.

Mallett said there isn’t a lot of money in the town and it has to rely on grants to help fund projects and pay for other needs. The town has acquired more than $7 million in grants for projects including water and sewer and the rehabilitation of Royal Giants Park. She has previously discussed creating a town housing development corporation, which would work to get people into homeownership.

Robinson, who is the owner of the Robinson Group, a consulting firm specializing in program management for construction, told the audience that in order to grow, the town has to attract businesses. But first, “you have to clean it up,” he said.

“We have to ensure we create jobs for people here,” Robinson said.

According to Robinson, 54 percent of East Spencer residents live below the poverty level. He said people still have not seen any relief with their water bills.

Robinson said that as a firefighter, protecting people is at the top of his list of importance. Robinson has been a volunteer firefighter since he was 16. Recently, there’s been buzz in the town about the future of the East Spencer Fire Department. The community conversations began prior to former Chief Josh Smith’s departure and after the town board learned the department had only one operable firetruck.

Leadership for the future also was a topic.

“We have a lot of older people on the panel. When they are gone, who’s going to lead?” she asked.

Kennedy, who works at the Hefner VA Medical Center, recently opened a transitional housing facility. She also opened a community center for youth and has plans for a day care center.

Kennedy and Robinson echoed the same sentiments about the rising water rates.

“The rates continue to go up,” she said, calling it a crisis.

She said what’s important to her is making sure the police and fire departments have what they need to provide services for residents.

“We are a neighborhood, not a community,” Kennedy said.

“There’s no library, no school. I would love to create subdivisions because there’s no set area,” she said.

Longtime East Spencer resident Tony Hillian said the town has done a decent job, but “we need to do a little more. We need to be inclusive to all citizens.”

Hillian, whose grandmother, Essie Mae Kiser Foxx, was a pillar in the community, sits on the board of the Essie Mae Foxx Charter School.

“I’m a doer. I have my hand on the pulse of the community. The time for talking is passed us. Let’s do,” Hillian said.

East Spencer native Dwayne Holmes, who co-owns his family business, Holmes Iron and Metal, declared his love for the town he grew up in, saying he and his family have contributed in many ways including volunteering and giving monetary contributions to various projects and causes.

“I’m ready to do what needs to be done. Let’s clean the front of Long Street,” Holmes said. “Let’s get in here together and make this town great again.”

Resident Ethel Evans asked the panel about the disrepair of many of the town’s streets, saying they are “beat up and full of potholes.”

Johnson said one of problem with growth is taxes. She said people just aren’t paying their bills.

“We need revenue,” she said.

Johnson said if the town could attract new residents, it would gain revenue. She defended the water bill increases, saying she was initially against the current position the town is in but has since come to see it was the best possible outcome.

Current Alderman Otis Gibson is running for a fourth term. The retired educator said there are a number of projects in various stages of completion that he wants to see through, including renovation of Royal Giants Park.

Gibson, who is the recreation supervisor, has overseen many activities for youths at the park, including the town’s annual free summer camp. The camp averages about 50 youths each year.

Gibson said he loves when he goes to local schools and the children come up to him and give him a hug because they have fond memories of their time at camp.

Rodney Queen wants next City Council to work as a team

Editor’s note: This is the eighth in a series of articles taking a closer look at Salisbury City Council candidates. SALISBURY... read more