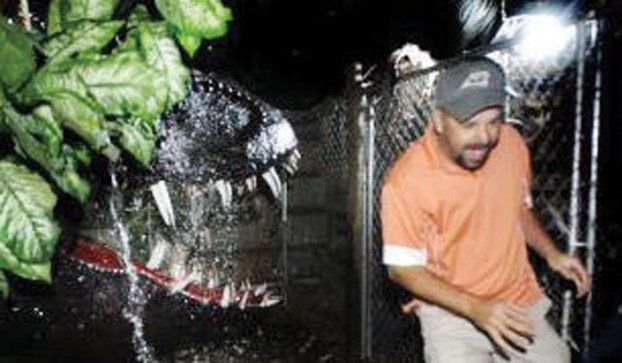 Boogerwoods is now in its 40th year. In this 2010 photo, a man gets a scare. Wayne Hinshaw/Salisbury Post file photo

But three years later, he met Christine, the daughter of a co-worker at Bost’s Bread. She had cystic fibrosis.

“I can’t remember if she ever came to Boogerwoods,” Trexler said. “She was pretty bad off.”

Trexler and his first wife, Robin, started the haunted attraction because they wanted to give kids something safe and fun to do for Halloween. But after meeting Christine, they felt like they had to do something to help, he said.

Since then, Trexler has charged an entry fee and given all the proceeds to the Charlotte chapter of the Cystic Fibrosis Foundation.

“We have about 90 volunteers. No one gets paid to do it. Some of them have to take days off (from work) to be here,” Trexler said. “They’re a really dedicated group.”

He said “a good many” of the volunteers have connections to cystic fibrosis.

“We’ve got one guy whose brother has (cystic fibrosis). Some people have friends who have it,” Trexler said. “They know why we’re out here.”

Robin Trexler passed away due to symptoms similar to cystic fibrosis. He now runs Boogerwoods with his second wife, Nancy.

Trexler said he thinks only one-fourth of Boogerwoods’ annual customers come because they know about its charitable donations.

“I guess most people come because it’s just the most fun,” Trexler said.

Boogerwoods is different from most haunted attractions because the characters don’t just do “jump scares.”

He said tour guides lead visitors through 14 scenes, some of which change every year.

“Some of them have nothing to do with Halloween. One of them, Club Booger, you’ve got to dance to get out of,” he said, laughing.

But, he warned, there are still some “really scary parts” as well.

Trexler recommends that no one under age 12 attend.

Shows usually last between 35 and 40 minutes. Groups of 10 are taken through the exhibit every eight minutes.

Tickets can be purchased beginning at 2 p.m. on show days at Boogerwoods, 725 Phaniel Church Road in Rockwell.

Tickets cost $15 per person. Visitors can also pay $25 per person for a “fast pass.”

The first group is led through the attraction at 7:30 p.m., and the last chance for people to line up is 11 p.m.

EAST SPENCER — Growth was the issue that seemed to draw the most discussion Thursday evening at a forum featuring... read more