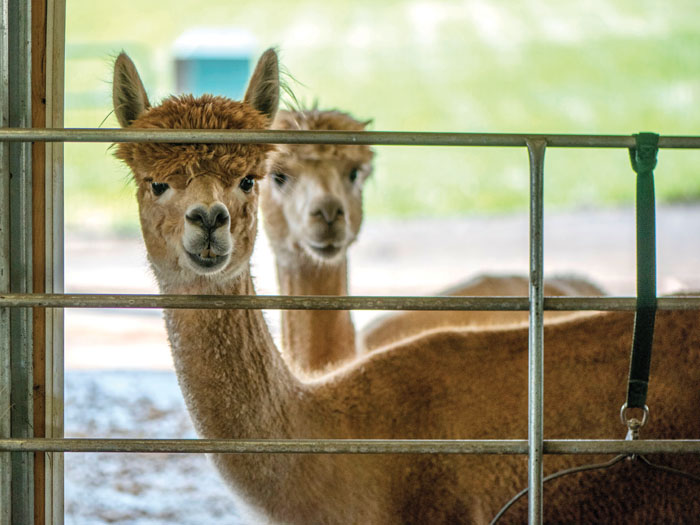 JON C. LAKEY / SALISBURY POST Char Johnson readies her farm for an up coming Alpaca Farm Days that is occuring nationwide on the weekend of September 23rd and 24th. National Alpaca farm days gives a chance for people to come to the farm an learn about the animals that is known for its fleece. Monday, September 18, 2017, in China Grove, N.C.

CHINA GROVE — With their furry topknots and big, brown eyes, these girls are sure to turn heads. They’re quiet and rather shy, though.

They are the girls of Happy Tails Alpaca Farm, off Old Concord Road.

Char Johnson is their surrogate mom, making sure they are fed, watered, washed and happy. In turn, they give her prize-winning fleeces and material for items she sells in a tiny shop in the girls’ barn.

The male alpacas are kept in another area because they can get frisky. Proper breeding is important to produce award-winning alpacas, or ones that have a gentle temperament and are trainable.

Do not pet an alpaca on the head, please. Alpacas do not want you to mess up their coifs. Neck and back pets are acceptable. They love carrots and have soft lips to gently take them from your hand. Apples are nice, but carrots are better.

Char and her husband, Rick Johnson, have 24 alpacas, male and female, with an old friend rejoining them, Ronny the male alpaca. He was born on their farm in Ohio and belonged to a young woman with severe dyslexia and low self-confidence who helped train him. She’s now in the Army.

Ronny can step into Char’s SUV and travel places with her as an alpaca ambassador.

Perhaps the most remarkable thing Char and Ronny are going to attempt is Alpaca Grams — when a card is not enough. Ronny will wear a birthday hat when he delivers. Char makes the arrangements and can bring along flowers or gifts. The recipient gets an Alpaca Gram T-shirt, with a picture of kissing alpacas.

Ronny has to be OK’d by the U.S. Department of Agriculture before he can venture out, but for $120, you can give a gift no one will forget.

Alpacas are very smart, Char says, but not warm and cuddly. They eat hay and grass fortified with special minerals. They come mostly from Peru and Chile and are smaller than llamas.

Alpacas are related to camels, and some of them even look kind of like camels.

With a degree in music education, Char took a bit of a leap to become an alpaca farmer. She is also a former bar examiner, as in the test lawyers must pass. When her oldest daughter was born, she quit work but looked for a second income or an investment. Her husband suggested alpacas.

Now she breeds the animals for show quality and seed stock. She had to learn about animal husbandry, fleece assessment and care, and farming. The gestation period for an alpaca is 11 to 12 months, and the babies weigh 18 to 24 pounds. But once they do give birth, they can be mated again 14 to 21 days later.

Alpacas live 15 to 20 years, so they do become members of the family.

They aren’t fond of hot, humid summers and love to be hosed down or sit in kiddie pools. Once it gets over 85 degrees, they stay in front of huge fans in the shade of the barn.

Alexis Ivie, a University of North Carolina at Charlotte pre-veterinarian student, is an intern at the farm and has fallen in love with the furry girls and boys.

One alpaca fleece, from Diva, won an award for best fleece in the nation. Char kept and maintains that fleece for exhibition. Diva also took a halter championship and won more awards, stealing the show.

Fleece is judged on color and quality of the fiber, so one alpaca could have a beautiful fawn-colored coat, but if the hair is too wiry, it’s not as desirable for show. It would be better used for socks, hats and other pieces of warm clothing.

Other alpaca owners send their fleece to Char to groom for competitions.

With the alpaca fleece, you can spin a warm yarn that is less irritating than wool because it does not contain lanolin. It’s also lightweight.

April is shearing season, when crews, often from New Zealand, come to do the work. They are experts and can shear an animal so that it has a perfect fleece ready for grooming and showing.

The little store in the alpaca barn is for alpaca products, some of which come from Peru, where Char’s daughter has been studying geoanthropology.

You can find completed products, yarn and raw fleece you can spin yourself. Char plans to add a line of goat’s milk products, and she has alpaca-themed toys and jewelry.

Char and Rick open the farm from 9 a.m. to 5 p.m. Saturdays and 10 a.m.-4 p.m. Sundays. They offer tours and can do alpaca crafts with children. The farm is at 9855 Old Concord Road in China Grove.