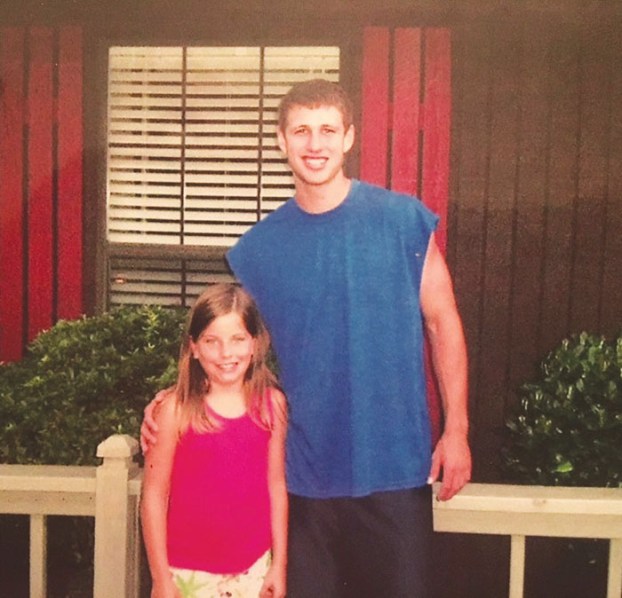 Submitted photo ... Jordanna Clark, left, and former University of Florida basketball player Lee Humphrey, in Maryville, Tenn., in 2006. Clark, a Carson High School graduate, is a now a journalism student at the University of North Carolina. The following column is being reprinted by permission of The Daily Tar Heel. It was written by Carson High School graduate and current UNC journalism student Jordanna Clark.

I was obsessed with the Florida Gators men’s basketball team that won the national championship that year and went on to repeat, winning the title again in 2007. I would sit on the couch for the games that were televised, and I would take notes about who was doing what on offense and on defense.

Lee Humphrey, the shooting guard for the Gators at the time, grew up beside my late Aunt Mary and Uncle Bill in Maryville, Tennessee. I thought that I was so cool because one summer as a little girl, I got to shoot with a male college basketball player on the same hoop he did, before he became a national champion.

The walls of the living room in my home in Salisbury are covered with various forms of sports memorabilia. Situated behind the couch is a picture of Florida’s 2006 national championship team that I cut out of a Sports Illustrated magazine and taped to the wall over ten years ago.

At the very least, I would hope that my childhood heroes, the 2006 and 2007 Florida Gators men’s basketball team, would’ve shown me the respect that I deserve if I had been a reporter in one of their post-game press conferences.

In light of Carolina Panthers quarterback Cam Newton’s recent comments to Charlotte Observer reporter Jourdan Rodrigue, I am disappointed as a female sports journalist. I’m disappointed in Cam — a father of two daughters and a quarterback with a powerful platform on and off of the field — as well as those who completely missed the sexism in his comment.  I have scrolled through social media and read comments where people did not understand what was wrong with what Newton said.

Because it was, after all, funny.

Isn’t it amusing to watch a female sports reporter actually know what she is talking about in reference to her own job?

Even if Newton was genuinely impressed with the content of Rodrigue’s question, it still would make no sense as to why he would feel the need to take the time to express it. In any context, it would not be a compliment to Rodrigue that Cam was impressed that a female sports reporter was good at doing what she was hired to do.

In fact, that’s the problem.

While I am still disappointed that the issue transpired, the backlash that Cam has received in response to his sexist comment is still extremely important to consider. It goes to show that what he said — no matter the way in which he meant it — is not acceptable.

In the video, Cam admitted that he was in the wrong. He mentioned his two daughters and how he wants them to believe “that they can do and be anything that they want to be.”

I respect Cam for issuing a sincere video apology instead of a scripted statement. I respect Cam for talking about his role as a father to two daughters and for addressing all of the “supermoms” out there. And I respect Cam for recognizing his mistakes and for telling others to “be better” than him because that is exactly what we all need to do — we need to be, and do, better.

We all do. After Newton’s comments, a few blantantly racist tweets from Rodrigue’s account surfaced into the conversation. Her tweets show that we still have a lot of work to do together to create a country where everyone feels accepted for who they are.

Rodrigue should receive just as much criticism as Newton has because one issue cannot be made more important over the other. They both go hand-in-hand at wrongfully rejecting people for who they are on the outside and ignoring what it is that they stand for on the inside.

Simply put: we need to stop judging a person’s perceived expertise in a field because of the color of his or her skin and/or gender.

Whenever I ask a male athlete a question, I want him to think about the content of my question — not about the gender of the person asking him the question. I think back to 10-year-old me glued in front of the television watching basketball games and living the dream by getting to shoot hoops with a national champion.

And hopefully, we won’t have to flash too far in the future to see that reality.

Jordanna Clark, of Salisbury, can be contacted at @jordymae012 or at sports@dailytarheel.com