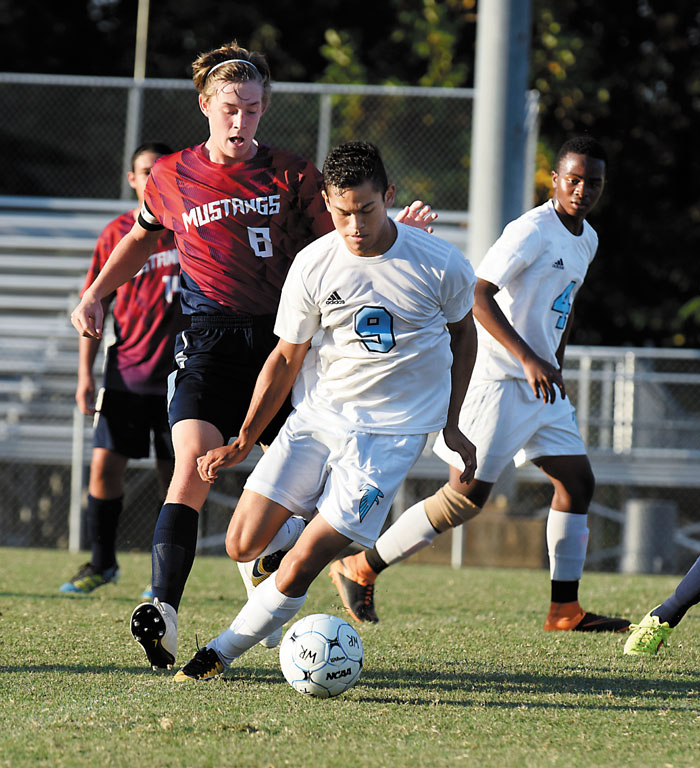 It turned out the Falcons needed every one of the four first-half goals they scored to prevail, 5-4.

“I’m happy that we still won, but disappointed how we did it,” winning coach Chad Torralba said after West (3-9-2 overall) evened its NPC record at 3-3 and snapped a six-game winless streak at home. “My boys can do better. Tonight, they got too emotional.”

It was hard not to after East (3-12-2, 1-5 NPC) scored four times in 24 minutes in the second half, then pressured West until the final horn.

“I don’t know why we decided to step up the intensity in the second half,” East coach Brian Moffitt said after the Mustangs lost their fourth consecutive match. “But it made for an interesting match. I don’t think I said anything that sparked them. Whatever it was, it came from them. We talked at halftime, but when we came back out I let them make the call.”

East finally logged on after yielding first-half goals to Jose Guerrero, Cristyan Cabrera, Darreon Gittens and Guerrero again. It seemed a one-sided rout was imminent until the Mustangs used early second-half goals from Jaxon Mastranunzio and Will Peeler to draw within 4-2.

“It was the best half we’ve played all year,” said East senior Will Garland. “We haven’t seen that intensity, constantly talking and communicating. It’s one of the first times we’ve done that.”

Cabrera, a rugged senior who’s face kept showing up at both ends of the field, scored what proved to be the decisive goal for West when he buried his second of the night on a 20-yard drive with 21:10 remaining — drilling a straight-on shot that eluded East keeper David Burleyson.

“It was super emotional,” the left-footed forward said after a dehydrating performance. “We managed to go up 4-0 and nearly let it all go. We’ve been in situations like that before and always seem to give up a little in the second half.”

Not on this night, though Torralba was all set to blame this crash on pilot error.

“It might have been my mistake, putting in the second-string players with the score still low,” said the third-year coach who began substituting early in the second half. “Because in the past, we’ve had high-scoring games. They’re all good players, but I’m afraid their heads were not in it and this is what happened.”

What happened was a molar-grinding finish. East pulled within 5-3 when sniper Alex Kalogeromitros took a feed from Mastranunzio and slid a doorstep shot past West net-minder Christopher Mercado with 17:29 to play. And when a hand ball was called against a West defender two-and-a-half minutes later, Kalogeromitros punched a ground ball into the lower left corner to make it a one-goal match with 14:51 on the clock.

“We were playing terrible, to be honest,” Guerrero said. “They were much better in the second half — playing with aggression and communicating. We had to fight the whole match because you never know what’s going to happen next.”

The way Falcons’ defender Kaleb Isenhour saw it, there wasn’t much choice. “If you’re West Rowan, you have to beat East,” he said. “It was a must-win.”

It wasn’t secured until the waning seconds, when Mercado scooped up a stray ball in front of the West cage and tossed it away from danger.

“In the end, I told my defense they had to watch the ball,” Torralba said. “And to watch Alex (Kalogeromitros). If he got the ball, we put pressure on him. We did that and it is what it is.”

Moffitt, a fifth-year coach, called it a “fun match,” and added: “Intensity level, us making the little plays and a little bit of luck. That’s how we got back into it. West Rowan was aggressive. They executed the simple things, the passes were on-point and they have speed. They didn’t quit.”

NOTES: West finished with a 23-14 edge in shots attempted. Burleyson made 12 saves and Mercado nine. … The match was officiated by former Carson coach Justin Blackwelder. He issued two yellow cards against West. … The Falcons have won two of their last three conference matches and play at South Iredell on Monday. East visits Carson on Monday.