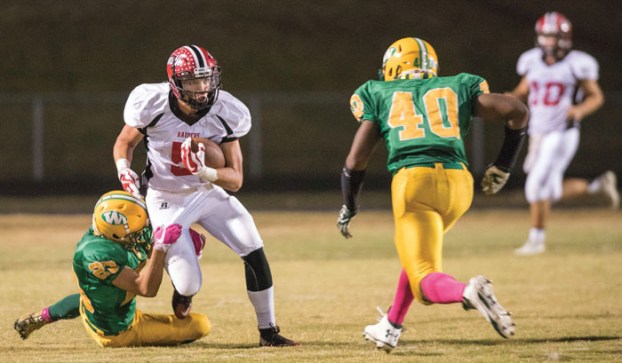 That’s news because head coach Daniel Yow has just taken five minutes explaining that Caraccio is as consistent and dependable as any kid in his program.

Caraccio eventually arrives on the practice field moving like he’s running a fly pattern and with his helmet already attached to his head. Yes, he’s running late, but he’s tardy for a reason. He’s been at the swim team meeting, a reminder that fall sports are hitting the homestretch and that winter sports are warming up in the bullpen.

“I remember my first swimming workout,” Caraccio said. “It was about the hardest thing I’ve ever done, and I can’t tell you how much I hated it. I wanted to quit, but Coach (Jarrod) Smith told me that if I never quit on him, he’d never quit on me.  I told him he had himself a swimmer, and I’ve stuck with that promise. I’m a swimmer.”

Smith is best known as the guy who coached South Rowan’s girls basketball teams when Avery Locklear and Cassidy Chipman and their friends were lighting up gyms, but he’s still an integral part of South athletics, the offensive coordinator for the football team as well as swim coach.

Smith recruited Caraccio for the football team, just as he did for the swim team.

“I went to North Hills Christian School growing up and played a lot of different sports,” Caraccio said. “When I came to South as a sophomore, Coach Smith knew about me. He talked me into coming out for the team, and I split quarterback snaps with Brett Amburn on the jayvee team. Going out for football is the best decision I’ve ever made. I’ve learned a lot from the coaches.  I’ve grown as a person. And there’s nothing more fun than playing football under the lights on a Friday. It’s the most fun I’ve ever had.”

As a junior, Caraccio’s role was to back up Austin Chrismon at quarterback. He actually played quite a bit when Chrismon was out with a shoulder injury.

“One of the best memories I have of last year was when we pulled off the hitch-and-pitch play against Robinson and Austin went 80 yards for a touchdown,” Caraccio said. “That was the night a lot of people came to the game because Austin’s grandfather (long-time South coach and AD Larry Deal) had passed away.”

The hitch-and-pitch play  has become the 6-foot-3, 190-pound Caraccio’s claim to fame. He’s become the master of the role of middle-man in that three-ring circus. It’s a play Yow picked up from current Carson head coach Joe Pinyan when they were both at Salisbury High. It’s a short pass to a receiver who attracts defenders before quickly lateraling to someone who is moving very quickly. Timing is everything on the hitch-and-pitch because it’s illegal if the pitch travels forward.

The hitch-and-pitch is recorded as a pass play, with the quarterback getting the passing yards for the entire play. The middle guy gets a catch and a handful of yards. The third guy — the finisher — laps up most of the glory. He doesn’t get a reception, but, if all goes well, he gets the rest of the receiving yards — and maybe a touchdown.

“It’s a play we do practice quite a bit, and we rarely fail to execute on it,” Caraccio said. “When we play a team that doesn’t know us,  a team that hasn’t seen us, we’re going to try it.”

Caraccio was one of the two “losers,” in South’s three-man QB competition prior to his senior season. Yow picked Amburn for the starting QB job, but that meant two of South’s better athletes, Marquis Rhyne and Caraccio, were going to be on the field in positions where they could make plays.

Last Friday South played a West Davidson team that had never faced the Raiders before, and it was almost a certainty South would unleash the hitch-and-pitch.

They had executed the play to perfection at East Davidson for a huge gain in Week 3 — Amburn-to-Caraccio-to Kory Sellers — but Sellers had been pushed out of bounds on the 1-yard line.

Against West Davidson, the hitch-and-pitch went for an 85-yard touchdown late in the first half and provided a 19-6 South lead. Amburn got 85 passing yards. Sellers, who can fly, got 78 receiving yards for blasting down the right sideline unimpeded. Caraccio got a tough catch for 7 yards and the satisfaction of knowing he made the play work.

“I was in the middle of being tackled by a bunch of guys, but I was still able to make a good pitch to Kory, and he did the rest,” Caraccio said. “Guys told me that was the greatest play they’d ever seen.”

Caraccio wasn’t done. Even after the sweet hitch-and-pitch, which can provide a momentum change like a homer in baseball or a dunk in basketball, West Davidson came back to rule the third quarter. A safety early in the fourth quarter cut South’s lead to 19-8. Then the Green Dragons had South backed up again, third-and-long.

“They had the ball the whole third quarter, and then they’ve got us third-and-forever,” Yow said. “Then they get a pass interference flag, but then Frankie jumps offsides, and it’s third-and-15.”

That’s when Caraccio got loose for a 58-yard reception that put the Raiders in the West Davidson red zone and back in control. South (1-6) ended a 10-game skid, dating back to last season, with a 32-20 victory.

“That pass play probably saved the game for us,” Caraccio said. “They had the momentum, they’d gotten that safety, and it was a recipe for us to lose. I’m sure a lot of people were thinking that it was going to be a classic collapse. It’s what could have happened, but we didn’t allow it to happen.”

Yow said Caraccio has made himself into the kind of guy who can make winning plays. And he shows up every day.

“When you’ve lost on Friday, and it’s hot, and you’ve just gotten out of school on a Monday, you’re tired and you definitely don’t feel like practicing,” Caraccio said. “But my dad always told me that if you fail to prepare, you’re just preparing to fail.  I’m never going to miss anything my team is doing, and I’m never going to make excuses.”

NOTES: South slot Cameron Hurd didn’t touch the ball at West Davidson, but he was the weekly team above self winner because of his blocking. … South’s defensive player of the week was, well … everyone. “They had the ball the whole third quarter, except for three plays, and we still didn’t allow any points.”