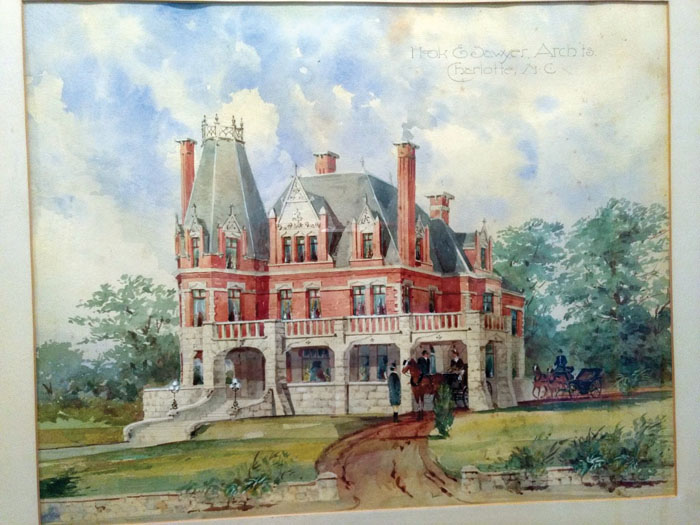 This is the architect's rendering of the South Fulton Street house built in the early 1900s for E.B.C. Hambley and later was the longtime residence of Leo and Virginia Wallace. The Wallace family still owns the mansion, located a 508 S. Fulton St. Note that horses and carriages, not cars, were depicted in the rendering, and the stone wall, entrance and landscaping are more understated than the way it looks today. Courtesy of Richard Hambley

SALISBURY — The family of E.B.C. Hambley, the entrepreneur who built the Chateauesque-style mansion at 508 S. Fulton St., has provided Historic Salisbury Foundation with a copy of the original architectural rendering of the house from the early 1900s.

Richard Hambley, a great-grandson of E.B.C. Hambley, furnished the rendering by Hook & Sawyer, Architects, of Charlotte. Richard and other members of the Hambley family will bring the original to the OctoberTour luncheon at the depot on Friday.

The Hambley-Wallace House and grounds will be a stop on this year’s OctoberTour, which is Saturday and Sunday.

Also expected at the luncheon are grandson Coleman Hambley, great-grandson Charles Martin and great-granddaughter Charlotte Hambley Davis. Hambley’s namesake and grandson, E.B.C. “Barry” Hambley II, lives in Charlotte but will not be able to attend.

The rendering shows the mansion in a much less urban setting than is the case today. The stone wall along South Fulton Street and at the entrance prove to be much grander now.

The rendering also did not anticipate the modern-day landscaping that accents the home, including what is now a 100-year-old gingko tree in the front lawn.

E.B.C. Hambley was a Cornish mining and civil engineer who came to the Piedmont in hopes of developing gold mines. He subsequently turned his ambitions to hydroelectric power and initiated construction of the problem-plagued Whitney Dam in Stanly County.

The house, whose construction began in 1902, was meant as a showplace suitable for entertaining the investors Hambley needed for his projects. Hambley died of typhoid fever in 1906.

Leo C. Wallace and his wife, Ella Belle Cohen Wallace, bought the house in 1927, but the mansion became most associated with Leo Wallace Jr. and his wife, Virginia. The house is now owned by Lee and Mona Lisa Wallace.

The signs that OctoberTour is coming are everywhere, and, yes, it starts with signs. The houses on the annual tour already have placards in their front yards designating them as tour sites.

A bonus tour site is the old Neely School near China Grove.

Another sign of OctoberTour are the downtown banners announcing the tour dates.

The normal buzz of activity around tour sites already is evident with neighborhoods sprucing up, raking leaves and putting out a traditional sign of OctoberTour — mums.

A tour ticket is $30 ($10 per child) and is good for both days. Advance tickets are $20 for Historic Salisbury Foundation members and $25 for nonmembers. Day-of-tour tickets can be purchased at any of the tour sites or the Henderson Law Office in front of the Rowan Public Library at West Fisher and South Church streets.

For information on tickets and the OctoberTour in general, go to www.octobertour.com. Some downtown Salisbury merchants also are selling tickets.

Here’s a rundown of some other activities related to OctoberTour:

• Thursday night, the Patrons Party is called “A Night at Magnolia Mansion.” It will be held at the home of Bill and Shari Graham.

• Friday, the OctoberTour Luncheon will be held at 11:30 a.m. at Salisbury Station (the depot). Historian Susan Sides’ luncheon talk will be “Money, Mining and Power: The Successful Life and Tragic Death of E.B.C. Hambley.”

The $45 cost of the luncheon includes a private tour of the Hambley-Wallace House after the luncheon. Luncheon tickets (separate from OctoberTour) are available at  www.octobertour.com or at the foundation office at 215 Depot St. or by calling 704-636-0103.

• On tour days, Bank Street Cafe will be set up in the 300 block of West Bank Street. Access to this area is free and open to the public. See the accompanying story.