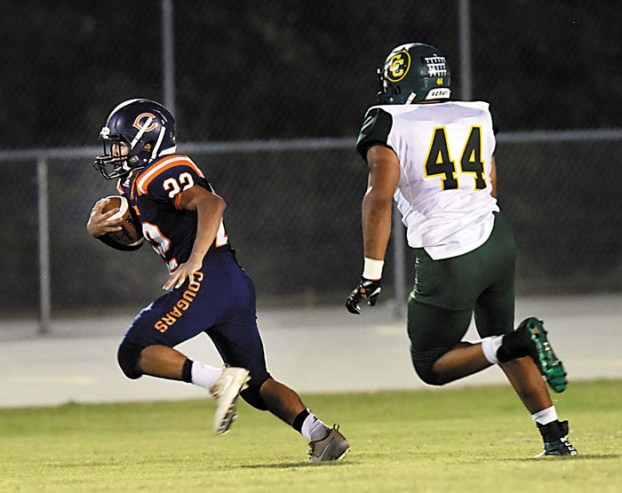 CHINA GROVE — The fullback is the bread-and-butter workhorse in coach Joe Pinyan’s triple-option offense. That was the case for 10 years at Salisbury, and it’s been the case for Pinyan’s last five at Carson.

“I think any coach that’s preparing to play a team coached by me, the first thing they want to know is who do I have playing fullback,” Pinyan said.

The guy playing fullback for Carson on Friday was 5-foot-7, 160-pound junior Gerardo “Jerry” Cipres. It may not be completely logical, but Cipres prefers Jerry with a “J” to Gerry with a “G.”

“I like Jerry — that’s just easier for my friends and teammates,” Cipres explained.

Cipres made it look easy on Friday as the Cougars beat North Iredell, 26-13. Carson (2-5, 1-0 North Piedmont Conference) won for the first time since Aug. 18 and won for the first time on the road. Cipres — his last name is pronounced like cypress —  carried 11 times for 105 yards and a touchdown. He also caught a key touchdown pass.

“We’ve thought all along that he’d help us,” Pinyan said. “Our fullback, most of the time, is going to get the most carries. Jerry still made some mistakes when he didn’t have the ball, and that’s something he’s got to keep working at, but when he had the ball in his hands he ran hard with it.”

Cipres’ older brother, Luis, was a defensive back for the Cougars in 2016. Jerry started earning some attention of his own last year on Carson’s jayvee team. He regularly broke long runs and he had a three-touchdown game against North Rowan.

But the adjustment to the size and speed of varsity football is never easy. Cipres didn’t have a lot of production in his first five games this season with the notable exception of  the loss at Salisbury when he picked up 81 yards on a career-high 13 carries.

But Friday changed a lot of things for Cipres.

“I didn’t feel any different and I don’t think I ran different,” Cipres said. “I’d say the difference was in our offensive line. They were blocking better than they had all year.We started having some success, and I felt my confidence growing every time I touched the ball.”

With Carson trailing 10-7 with 50 seconds left in the first half, Cipres put the ball in the end zone from the 7-yard line.

“I just had to read the blocks, and a nice hole was there,” Cipres said. “I’ve played with (halfback) Josh Lee since middle school, and he made a good block for me. So did the end on that side — Jamarius Hairston.”

The critical play of the game for Carson came early in the fourth quarter. It was 13-all, and Carson was facing fourth-and-goal at the North Iredell 4. Cipres appeared to be in a blocking role, but then he slipped off a linebacker and was  free in the end zone.

When the fullback has a good game, Carson has a good offensive game. Cipres’ big night also helped halfbacks Lee (72 yards) and Hunter Courtney (67 yards) and Sifford had good numbers on the ground and through the air.

“We were having a lot of success Friday with the trap play,” Sifford said. “Cipres used his vision and he was following his blocks very well.”

Carson hadn’t reached 200 rushing yards in a game all season, but it had 295 at North Iredell. That’s the most rushing yards the Cougars have had since they put up 369, with Sifford running wild on trap plays at fullback, against East Rowan early last season.

“When we’re getting good play from our fullback, he can carry a lot of the load, and it helps everyone else relax,” Pinyan said. “And our guys upfront — they did their jobs.”

After the game, Cipres was taking a knee with his teammates when he heard his name announced on the public address system. Jerry Cipres had been requested to report to midfield. Statesville Farm Bureau Insurance presents special game balls to the offensive and defensive players of the game for contests in Iredell County. North Iredell’s Drake Liles was the defensive winner, while Cipres was the offensive winner.

‘That football made it a special night,” Cipres said. “It made me feel special.”

NOTES: Linebacker Josh McCurry was Carson’s defensive player of the week. He had 11 tackles and a forced fumble. … Cornerback Jailen Williams had three pass breakups. … Sophomore safety Juan Espinosa made team-high 14 tackles and kicked two PATs. … North Iredell took away Hairston most of the night, but he made a great catch for the clinching TD.